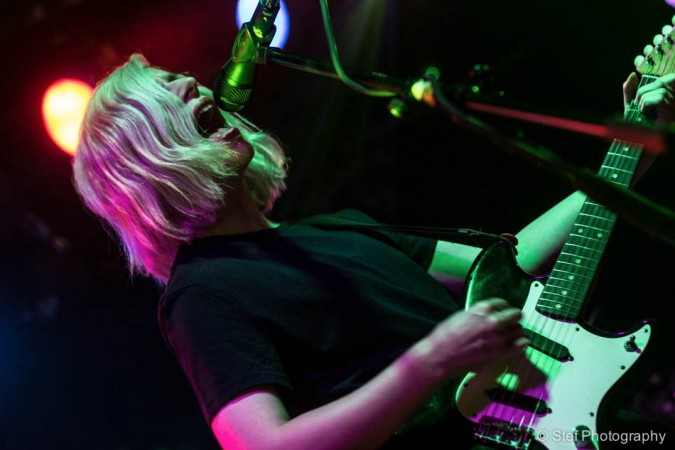 Finally selling out in the days before this evening’s show, in fact around the time their current UK tour was kicking off in Sheffield two nights prior, Toronto based indie pop five-piece Alvvays (pronounced Always) brought along their alluring melodies and enticing lo-fi guitar jangles to a jam packed performance at The Fleece. Established set opener ‘Your Type’, a surging sub two minute lament of unrequited affection (“I will never be your type”), joyously propels the evening forward; a hitherto unreleased track, it also whets the appetite for a follow up to the band’s eponymous 2014 debut.

One of the standout tracks from that record, ‘Adult Diversion’ features a bed of duelling surf guitar breaks punctuated by some excited yelps from singer/guitarist Molly Rankin. After her making reference to the band’s January performance at Thekla (“We’re not on the boat this time”), ‘Next of Kin’ masks the tragic tale of a drowned lover beneath its penetrating verse melody and the hypnotic shimmer of guitars. ‘The Agency Group’ in featuring lyrics such as “When you whisper you don’t think of me that way” revisits the band’s habitual theme of unrequited love, this time the sentiment less camouflaged by a slightly rueful but no less pretty vocal melody.

The intoxicating and easy to digest fuzz of Alvvays’ music seems to be a composite of elements already highlighted in press circles: They combine the accessible jangle of the likes of Best Coast with the lo-fi fizz of Dum Dum Girls along with the Tracyanne Campbell-esque marrying together of love-gone-wrong melancholia and attractive tunes. Alvvays also have a valuable weapon in Rankin; her piercingly deadpan, slightly off-kilter vocal provides a girlish aesthetic integral to the song’s themes and vulnerabilities. Guitar lines are kept simple, Rankin sometimes doubling up during short instrumental breaks with guitarist Alec O’Hanley, and bolstered by thick layers of reverb.

Rankin, with various clipped conversations throughout, makes for a friendly enough hostess. She mistakenly enquires about a Mac Demarco appearance in Bristol that won’t happen until next week and later ponders on whether it is okay to enjoy both Oasis and Coldplay. Prompted by a fan’s attempts to surmount one of the venue’s support beams during the galloping tunefulness of ‘Atop A Cake’, she later alludes to the embarrassment of a “skinny” and “weird” younger self having to climb a rope in gym class.

Still in their infancy in regards to a back catalogue, Alvvays play every track from their debut. While the changes of gear seen in songs such as ‘Dives’ provide a slower, less reverb-drenched soundscape through which Rankin’s vocals can perhaps be most appreciated, it is with the upbeat power pop seen in ‘Archie, Marry Me’ that they excel. With its near irresistible “Hey, hey” chorus refrain, the track sees the audience, who have been receptive all evening long, in full singalong mode. Also worthy of mention is new song ‘New Haircut’, a relentlessly catchy tune which culminates in Rankin’s infectious falsetto vocal at its chorus.

A two song encore features a solo spot for Rankin as she lays vocals over a pre-programmed backing track of ‘Red Planet’ and, after O’Hanley’s observation that an apposite gig poster sits behind the Fleece bar, a charmingly energetic cover of Kirsty MacColl’s ‘He’s On The Beach’.

“This was way better than I thought it was gonna be” an earnest Rankin informed the audience towards the end of the evening. Though tonight’s performance may have exceeded the lead singer’s expectations, those of the audience have been thoroughly met. Alvvays perform simple and well-crafted songs atop a thoroughly enjoyable mesh of accessible, melodic sounds. And there’s surely more to come.

Photography by Stef Formica –   View full gallery from the night.