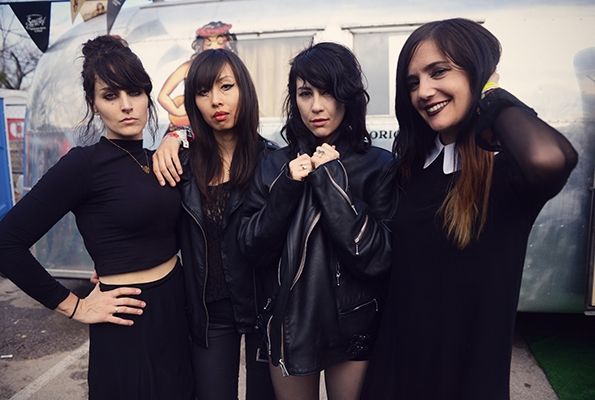 Originally part of the American lo-fi guitar ‘scene’ along with bands such as Blank Dogs, Woods and Crystal Stilts, Dum Dum Girls have now been around for so long that their inception occurred when Dee Dee Penny (real name Kristin Welchez) started posting music on some antediluvian relic of yore called MySpace. With fellow fuzz-pop acolytes Vivian Girls announcing their dissolution just a short time before the January release of Dum Dum Girls’ third album “Too True,” it could be suggested that the Californian group have become the sole female torchbearers from the batch of lo-fi bands employing their non-polished, DIY ethos in the late 2000s.

‘Scenes,’ however, are perhaps an all too convenient labelling system and in listening to the shiny productions of “Too True” it is obvious that it stands as something largely disparate from the scuzzy, homemade guitar rackets of debut “I Will Be.” Tonight, though, Dum Dum Girls are sparing in performing their latest songs and, after finally making their way to the stage at 10:45pm, we hear a welcome mix of tracks from all three albums and EPs.

‘Bedroom Eyes,’ an anxious tribute to lovelorn insomnia, is the set opener and the pleasantly repetitive refrain of the chorus reveals a melody that instantly sticks. The first of the new(ish) songs is ‘In The Wake of You,’ it containing a simple three note guitar figure slightly resembling the riff to Billy Idol’s ‘White Wedding.’ This brings to mind the overall sound of “Too True” and, while the album has triggered references in the musical press that include The Cure, Suede and The Jesus and Mary Chain, it is rather more in thrall to a polished 80s soft rock sound; title track ‘Too True To Be Good’ and ‘Are You OK?’ appear back to back and wouldn’t sound out of place on a Pat Benatar record.

Whether it is the late commencement of tonight’s show, indifference or diffidence, Dee Dee eschews crowd interaction completely  until a simple ‘Thank you’ follows the whirling guitar effect and upbeat thrash of fifth song ‘He Gets Me High.’ She remains composed even after an audience declaration of love following ‘Rest of Our Lives’ and, despite some strange yelps that attest to certain members of the crowd having indulged in the joys of Sunday drinking, she retains a straight-faced cool.

Despite the lack of interaction, Dee Dee, with a somewhat demure sexiness and the smoky husk of her vocal delivery, still manages to be an engaging stage presence; it also helps, of course, that her songs are tunefully enjoyable. They follow a faithful formula of catchy, strum-along chords backed by fundamental drum and bass grooves with simple touches of lead guitar. The general themes of angst filled romanticism are mollified within a confection of pleasing melodies and effective three way harmonies completed by Dum Dum Girls Malia on bass and Jules on guitar. Usual drummer Sandy is conspicuously absent with a male presence at the drums while tonight’s line up is completed by guitarist Andrew Miller who, masculinity aside, was heavily involved in the project’s origins with contributions to “I Will Be.”

‘It Only Takes One Night,’ is an excellent example of hummable guitar pop and, as the three way vocal lingers on “night” for an impressively long time at the song’s finish, it receives the best reception of the evening. Following a cover of Pale Saints’ ‘The Sight of You,’ the night ends with a two song encore, the last of which is from “Only in Dreams,” an album wherein the main theme was the loss of Dee Dee’s mother. Clearly meaning a lot to her, she gives an emotive, eyes closed performance over the slow, moody stomp of ‘Coming Down.’ It’s a powerful close to the set and a welcome change of gear considering persistently poppy melodies that, after nearly an hour, were in danger of becoming saccharine.

It’s 11:45pm, the curfew smashed, and all being said, Dum Dum Girls are fine exponents of guitar driven pop music. Whether Lo-Fi, Hi-Fi or DIY, the echo of Dee Dee’s songs are charming companions on my midnight stroll before bedtime.