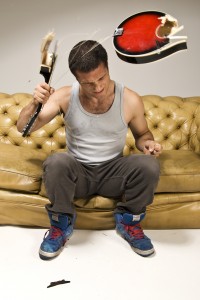 The Louisiana could quite conceivably be the biggest draw in towntonight as an expectant crowd go elbow-to-elbow to witness Cosmo Jarvis land. Himself heralding from Devon and perhaps dragging a few devotees from that direction, I’m nevertheless struck by both the size and enthusiasm of his audience. The venue is one of many of its size in Bristol. From the downstairs bar weekenders spill out onto the street outside as the February sky promises its first signs of Spring. From here, you wouldn’t know there was a pounding venue upstairs but on climbing the stairway music lovers are already abundant. I arrive to see Glasgow’s Lonely Tourist limbering up the crowd; single-handedly creating the effect that it takes four members of Mumford and Sons to produce. His ‘I Live Where You Are’ LP is already out and I look forward to seeing him again at this Summer’s Godney Gathering. By the time his set closes, the venue is near-capacity and the feeling is feverish. A month earlier, I’d previewed this occasion for The Basis and became familiar with Cosmo’s eclecticism and eccentricity. Anticipating something akin to the red morph suit he sported in his “Love This” video, when he does hit the stage his dress is a little more low-key; jeans and hoody. Furthermore, there are no great stage theatrics or special effects and between-song banter is limited to song introductions. However, Cosmo’s catalogue is already a force to be reckoned with and he and his band deliver a muscular performance. The set is book-ended by the big hitters; “Love This” and “She Doesn’t Mind” arrive early and “Gay Pirates” closes proceedings before the band are called back for a short encore. Such tunes are met with a chorus of revellers and provide all the entertainment required. The whole evening has a laid-back feel. Bristol is a city that loves its music and venues like The Louisiana do a great job in making sure new and alternative names and their keen fans have a home. Cult figures like Cosmo prove that such a haven can be the best place to be on a Saturday night. Absolutely rocking. For more information on Cosmo Jarvis visit: www.cosmojarvis.com Review by Matthew Nicholson
Follow @Thefixmag
Recent Posts
We Like You…