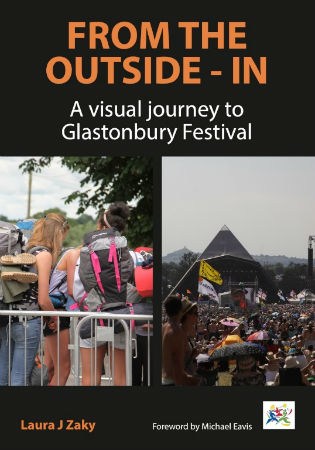 A unique book is being launched on Friday 15th November containing over 600 photographs of Glastonbury Festival and how it touches the town and communities of Glastonbury and the surrounding villages. From the Outside – In captures the partying, carnival and artisan experience that the festival is famous for, alongside a rarely seen visual journey of what it takes to make Glastonbury happen. From the police operation to the waste management to transportation to the media broadcast set-up, Glastonbury based photographer Laura Zaky’s debut book is truly unique as it shows the wider story behind this iconic event. Speaking about her book, Laura said, “I’ve been photographing the Festival and its impact on the wider community since 2008 and amassed over 6000 photos in that time. I could see from the visitors to my Flickr site that there is a huge appetite for Glastonbury Festival photos, so I decided to collate the best of those into a special collection that shows the wider Glastonbury story.” The community in Glastonbury town itself has really got behind the book. Found inspired by Laura’s photography and theme of the book, six local businesses sponsored the project in order to help bring it to life. They are Burns the Bread, Glastonbury Ales, Dicketts Art Shop, JJ’s Taxis, Glastonbury Post Office and Mocha Berry Café. Furthermore, local resident Matt Bone designed the book without charge and Michael Eavis, the festival founder, has even written the foreword himself. On Friday 15th November, Laura will officially unveil the book at a launch party event hosted by La Terre, a popular restaurant on Glastonbury High Street. On the night there will be three framed signed photos from the book available to purchase, a themed floral arrangement by Enchanted Florals of Glastonbury and rock band My Story, from neighbouring Street, will be on hand to perform a stripped back acoustic set. It all kicks off from 7pm and you can buy a signed copy of From The Outside – In while you’re there. 50% of the proceeds from the sales of the book will be donated to the Glastonbury Abbey Ruins Funds and Glastonbury FM, a community radio station for the local area. For more information about the book visit www.laurazaky.com While you’re here… The Fix is delighted to support independent film and to be involved with comedy/drama series The Awkward Conversations We Have.  Here’s the opener, titled, Son We’re Swingers:
Follow @Thefixmag
Recent Posts
We Like You…