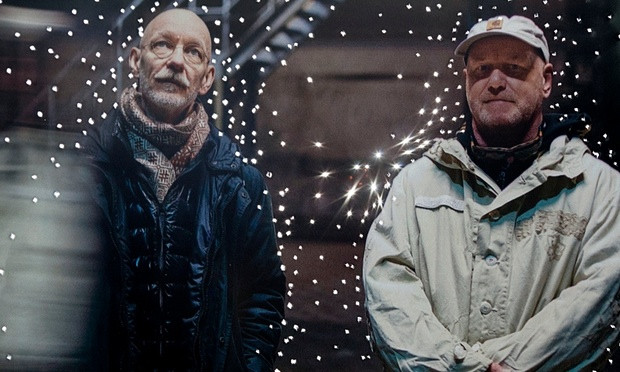 Fresh from releasing their 13th Studio album Moonbuilding 2703 AD, to great acclaim it must be noted, The Orb return to Bristol’s Thekla this November for their latest tour.

The current album sees the ambient dance pioneers, aka Alex Paterson and Thomas Fehlmann, working without collaborators after a series of albums featuring the likes of Lee “Scratch” Perry, Youth and David Gilmour.

Moonbuilding establishes that the duos ambient techno brilliance is undimmed and  is described in a press release as “a major piece of psychedelic synth bliss, obscure loops and deep ambient textures, driven by swinging breakbeats and powerful basslines.” Paterson further adds that the album is “inspired by this place called Earth and the idea that in the future mankind discovers its root element in the ancient rocks on solar moons, which are based on musical harmonies, that despite being imprinted a billion lights years ago, are set to the same tempo as the Orb.”

Having completed a tour of the US, Scandinavia and Europe the band should be in fine fettle by the time they reach the Thekla on 21st November.

Once a week, in the back room of the Rec Centre, two men meet and dance. Try to. Try to get their feet and their hands and their arses in the right position. Try to find a bit of elegance, a bit of that lightness they’ve lost. Practice makes Perfect. Or at least, Practice makes Half Decent.

Jack’s body is falling to bits. Freddie’s head is. Outside of that room, they are strangers, products of different times, of different worlds. As they fumble their way through practice, the two men share their solitude, and the contents of their heads. They swear, they sweat, and find a strange sort of intimacy they didn’t know they were missing.

A play about love, about loneliness, about joy and about dancing.

Directed by Nik Partridge, Trip the Light Fantastic will be preceded by a ten minute play and is part of Theatre West’s season of plays kick-started by the notion of Moving On.

Miriam Battye is a playwright living and working in Bristol. Recently she has had work commissioned by National Youth Theatre, the Royal Exchange Theatre and Undeb.

This all takes place in 60 different Front Rooms, street corners open spaces, pubs, cafes, church halls, cemeteries and shops across Totterdown. It’s a wonderfully delicious opportunity to come and savour the work of these talented and creative local artists, to see some demonstrations and to take part in our many taster classes or fun activities.

This Years theme is Hats. There will be plenty of activities around hats and organisers are asking both artists and the public to wears hats of their choice, or come and make a hat in their workshop and join the hat parade through the woods down to the Mad Hatters Tea Party in Arno’s Vale Cemetery.