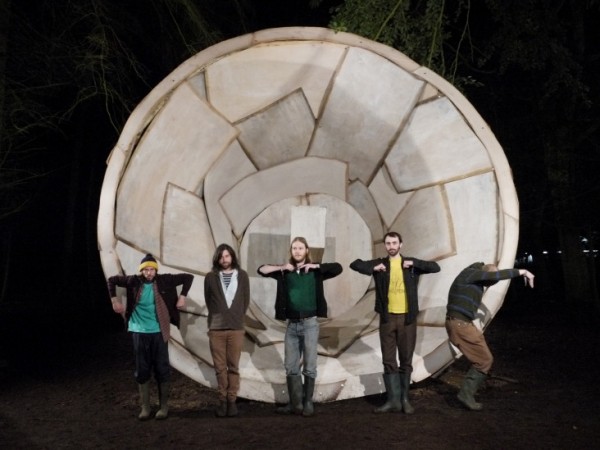 The Grubby Mitts – ‘Home At Last’

This quaint little ditty, by the Bedford based five-piece fronted by renowned visual artist Andy Holden, was brought to our attention when it was fired into The Fix’s inbox sometime last week. While such emails occasionally represent little more than the electronic equivalent of posting a freshly laid turd through someone’s letterbox, (just kidding PR folks – keep ‘em coming!) ‘Home At Last’ is a whimsical indie pop charmer replete with twinkling guitars and offbeat lyricism.

Admittedly, the punning opening lyric “Your love was like a hole/But I dug it” places the song at early crossroads from which it may well have disappeared into a no-man’s-land of cloying quirkiness. However, the following line “I crashed my car into your house and I thanked God I’m home at last”, along with the gloomy minor chord shift into the first bridge, assure the listener that we are on rather more rewarding terrain.

In a week that has seen the former Girls Aloud star receive criticism for a four episode cameo in Coronation Street that was apparently more wooden than Pinocchio riding a rocking horse in a lumber yard, it’s undoubtedly been suggested more than once that she should stick to her day job. However, with the release of new single ‘Threads’, those naysayers may well be forced to eat their words; for when Harding isn’t delivering acting performances that make the cast of Hollyoaks look like Gielgud-esque stalwarts of Jacobean theatre, this is what happens.

The black leather, scuzzy guitar riffs, heavy bass and lyrics containing the word “bullshit”, all point at a try hard rebelliousness and an obvious attempt to market Harding as some sort of born-again badass. The video even features the Queen’s image being defaced when half a twenty quid note emerges soaked in blood plus there’s a blatant disregard for the flammable qualities of antiperspirant – Harding better return to the soaps quick smart before our nation’s youth is corrupted beyond redemption.

In another week crammed with the ubiquitous samey sounding polished pop and RnB productions with the inevitable whats-his-name featuring Titty Biscuit or so-and-so featuring MC Arsedribble, it’s time for another one sent to our inbox this week. Working alongside acclaimed German producer Phon.o, this is the latest offering from French electronica artist Annabelle Guilhem under her better known moniker Velour Modular.

‘The Shields’ with its watery reverbs, pattering percussion and soulful vocals, simultaneously manages to be broodingly ponderous, atmospheric and danceable. Drawing comparisons with acts such as Jamie xx and The Knife, this track is a pleasing electropop confection of varying moods. Revealed by Guilhem to be a song about rejection and the accepting of vulnerability, it has an emotional currency on which it easily stands above the vast majority of this week’s releases.