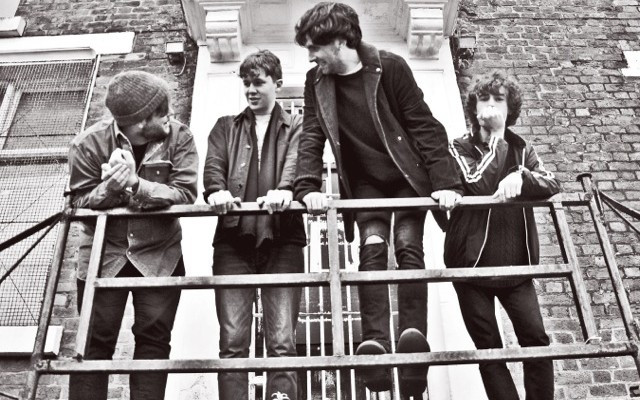 Despite the fact that the spelling out of the song’s chorus letter by letter gives it the air of an indie rock Sesame Street, the infectious melody of this latest track from the Wirral newcomers makes it charmingly immediate one. With the release of last week’s debut album Highest Point In Cliff Town, the slacker rock quartet have started to garner a reputation for singing about the small, and apparently inconsequential, details of existence; this is evidenced here as an entire opening verse about straining tea leaves heralds in the return to another one of those inculcative choruses.

Signed to Heavenly Records, Hooton Tennis Club are in good company bearing in mind talented stablemates such as Temples, H Hawkline and Stealing Sheep. I’m not exactly sure who ‘P.O.W.E.R.F.U.L .P.I.E.R.R.E’ is (or why his name contains such extraneous punctuation) and the guitarist’s playing does sound as if it’s been loosened up by too much complementary gin; however, it all makes for a joyfully raw racket that warrants further exploration.

I can only think that this near nine minute mini-film that accompanies the Irish rock veterans’ new single is a manifestation of Bono’s gargantuan ego now seeping into the realms of the music video. Starring ‘White Men Can’t Jump’ protagonist Billy Hoyle and the daughter he supposedly didn’t spawn with Rosie Perez, we’re already close to two minutes in before ‘Song For Someone’ even begins. And the end credits (written, directed & executively produced by Bono who also carries out best boy and dolly grip duties) actually last about half as long as the song does.

This leaves just over three and half minutes of tune and as is my usual opinion on U2’s music, it’s good without being essential, enjoyable enough for a solitary listen but unlikely to have me scrambling for any illegal downloads… err, I mean popping down to my local record store. The mini-film starts off pretty boringly – an early highlight is some tantalising footage of Hoyle having a shave – but, in all fairness, the narrative twist of Hoyle’s prisoner being marched to freedom as opposed to execution is nicely done. Although his release merely results in a car journey so painstaking in its awkwardness that having one’s giblets fried in the electric chair would begin to appear like a blissful relief.

Following on from previous singles that I imagine were entitled ‘Live Life to the Max’ and ‘You’re a Long Time Dead’, the New York City pop rockers are back with a novel lecture on how we should all approach human existence. Forget life’s caveats and complexities and any arguments that times of melancholic difficulty are in fact necessary functions for us to contextualise and appreciate periods of happiness…just start embracing life you goddamn morons!

Treading a well-worn path of lyrical cliché, (“Life’s too short”, “I’ll sleep when I’m dead” etc) the video finds American Authors somewhat overreaching in their sentiments of living a full life: Why not embrace your existence by having a romantic meal at the apex of a mountain or simply transcend the linear passing of tens of millions of years and go for a ride on the back of a T-Rex? How about performing some godawful country inflected pop-rock while walking the surface of the moon?

Bearing in mind the clearly earnest intentions on display, song and video make for a fairly amusing combo. That’s if you can get through it all. I mean, life’s too short innit?