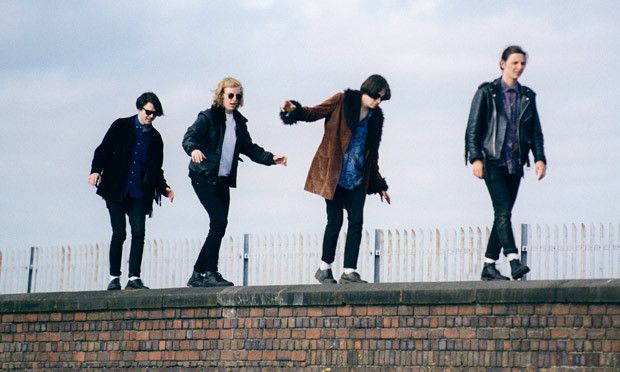 Bringing you right up to date with the latest releases, here’s our pick of this week’s new singles.

Featuring what appears in the video to be Bender from the Breakfast Club on guest vocals, ‘Gen Strange’ is taken from Worcester indie quartet Peace’s second album Happy People. With the funky thrash of its guitars and slightly baggy groove, it sounds a little redolent of Blur’s ‘There’s No Other Way’ with a touch of early Charlatans hedonism thrown in for good measure.

The video stars footballer and robotic dancing extraordinaire Peter Crouch who pays the price for his emo-bashing ways when a cricket bat takes out the wing-mirror of his VW. Also look out for some rather careless disregard for the flammable qualities of spray paint and a poor fella in liquorice allsort pyjamas receiving a face full of lovely urine.

Elbow – What Time Do You Call This?

The band’s first release since last year’s No.1 album The Take Off and Landing of Everything, ‘What Time Do You Call This?’ was recorded especially for the soundtrack of Simon Pegg’s new romantic comedy ‘Man Up’. Featuring swirling strings and some rather attractive piano embellishments, the song’s lyrical content expresses lovelorn impatience as to the prospective arrival of that someone special. The maudlin Mancunians have most likely provided the sonic backdrop to a scene where Pegg makes a last minute, relationship salvaging sprint to an airport.

Doctor and the Medics – You Spin Me Round (Like a Record)

And relax…Doctor and the Medics have finally returned! After seemingly building a whole career around their 1986 cover of Norman Greenbaum’s ‘Spirit In The Sky’, a song they made completely their own by making it…umm…absolutely identical to the original, the London-based rockers are launching a comeback with yet another cover version. Their interpretation of Dead or Alive’s 1985 hit features muted guitars, some sexy lead lines and even a brief blast of Auto-tuned vocals (i.e the Cher ‘Believe’ effect).

The song’s video is like some weird post-apocalyptic nightmare with slightly androgynous 55 year old men wearing makeup, a vicar with three hairstyles on the same head, and a bizarre human/badger hybrid playing guitar – a combination that somehow manages to be even more terrifying than Pete Burns’ face.