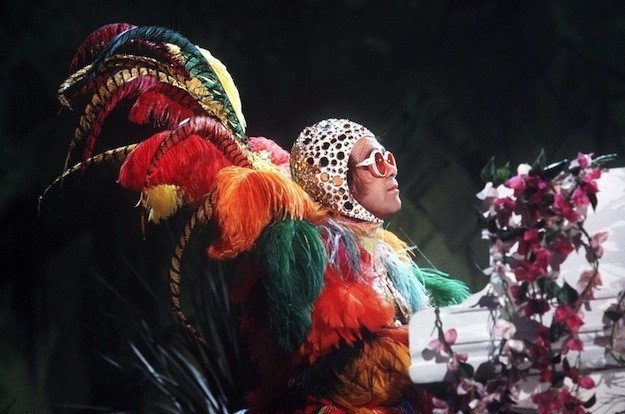 It looks as though rock n roll’s perennial rug wearing ivory tinkler won’t be disappearing anytime soon and this latest single is from Elton John’s 33rd studio album Wonderful Crazy Night. Indeed, kudos has to be given for a prolific career that now spans nearly 50 years; even throughout the 70s and 80s – when John was so out of his gord on narcotics that performing while dressed as Donald Duck seemed like a perfectly acceptable thing to – he was banging out long-players at a rate of at least one a year.

The video is one of those love-conquers-all type efforts, drumming home the point that it transcends age, gender and sexuality and permeates every part of our existence. Love is important of course but, in checking out Elton’s right pinky, so is having a golf ball sized bit of bling that probably costs the equivalent of the GDP of Malawi. Also, the extremely morose looking woman sitting in a clearly marked Mercedes brings up some interesting thoughts on product placement; is any publicity for a product good publicity? Will advertising become so depraved that it’s possible that, in the world of cinema and television, we may one day see a suicidal goth take a bath with a Russell Hobbs toaster or a deranged jihadist using a Black & Decker to lop off the head of an infidel?

In defiance of crackpot NWO whistleblower and former Coventry goalkeeper David Icke, Manchester emcee Geko actually is a shape-shifting reptilian lizard thing and he hasn’t been afraid to name himself as such. Even his choice of threads in the video to new single ‘Y’ are suitably gecko like. So, Icke beware; here is a half-man, half-reptilian hybrid lying in plain sight. Which is quite ironic if you think about.

When not transmogrifying into his green scaly form, Gecko is an absurdly young rap star; how did it happen that someone born in the late 90s is making music videos as opposed to accidently soiling their super dry Huggies while staring at television characters made of plasticine? Gecko fiddling about with his mobile phone at the very start of the video – most likely because he’s on the hunt for animated Japanese monsters or “peng” girls on Snapchat – feels very much in keeping with the fledgling vibe, as does the sight of Geko’s gang of teenage reprobates. In fact, the only person who looks like he could insouciantly stroll into an off-license is featured artist Afro B, who presumably has chosen to forgo the cold-blooded and instead shape-shift into Celtic footballer Kolo Toure.

Matt Johnson – ‘Get Over You’

Nearly fourteen years after short-lived boy band One True Voice lost out to Girls Aloud in 2002’s Popstars: The Rivals, singer Matt Johnson is still surviving the music biz and attempting to heal his broken heart in this latest single. The song has already racked up a steady 143,000 views on Johnson’s YouTube channel whereby you can see that he has replied to each and every comment; I can’t figure out if this is the most touching thing I’ve ever seen or merely the needy actions of a man determined not to fall back into the post OTV wilderness years where he was reduced to frying nuggets at his local Chicken Cottage and a short lived role as Sheffield United mascot Captain Blade.

The video features the object of Johnson’s unrequited affections bailing the relationship at dawn and partaking in a casual act of impromptu child kidnapping. After pulling over on the side of the road to have a little cry, the fleeing ex-lover soon gets over it and has a highly enjoyable day of milkshakes, arcade machines and sprinting along a pier. In fact she’s so unperturbed by her running away from a relationship and pilfering of a child that even a power cut at a bowling alley causes her to dance a delighted jig. Johnson, meanwhile, sings his heart out in an abandoned cinema; like an overzealous nerdlinger impatient for the next installment of Star Wars.