Following the release of their second album ‘A French Kiss In The Chaos’, Reverend and his gang appeared to be on a somewhat quiet spell, but this year they have bounced back with a solid third, going in all guns blazing with a more electronic approach. On the brisk evening of October 26th they stoked the Bristol crowd into a bouncing frenzy. The Dragonflies kicked things off, delivering a selection of chilled out mellow indie tracks. Delicate vocals worked well alongside upbeat guitars, which made up for their lack in overall stage presence. The Virginmarys took on a drastically different approach with the drummer breaking on average four pairs of sticks each song and the singer looking like he might just kill somebody. This is a band with real attitude, bringing punchy aggressive rock to the evening. Perfect huh? The Virginmarys are without doubt the most exciting band I have seen in a while. I will definitely be picking up their first album when it’s released next year. 9.30pm arrived and Reverend and the Makers took to the stage pumping straight into new track “Bassline”, during which the Reverend kept beckoning the “Barflys” at the back to step away from the bar and get down onto the dance floor. After spurring the venue into action things were taken up a notch as the band started skanking around the stage to the classic “Bandits”. Hestill gave the people at the back a hard time, whilst lapping up the energy from the front rows. After a tight performance of “Open Your Window”, The Reverend asked the crowd “Who’s got Facebook?” and as a sea of hands went up, he said “and who looks nothing like their profile picture?” as he did the funny lips face which is a common sight if you glance at the social networking devil. “F***ing unwind a little bit yeah?”, this line introduced the opening synth notes from “The State Of Things”. The slower pace of the track settled things down. 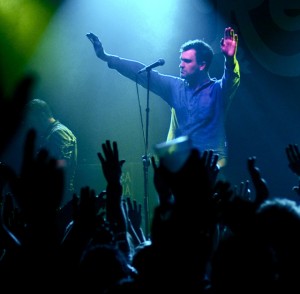 The Reverend was on form with crowd interaction all night; at one point he pinched a phone from a kid in the front row and ran around stage with it as he filmed himself doing his legendary comedic dance. Later he even offered the crowd a game of FIFA insisting, “Tweet me, I will play you at FIFA. I am serious”, revealing his laddish side before playing the newer track “Shine A Light”, which actually features on the game. Of course we heard all the expected tunes, “Heavyweight Champion Of The World”, “No Soap In A Dirty War”and “Miss Brown”, which in all fairness are enough to make any night a prodigious one. But there was to be an added bonus. The hopeful crowd were dropped hints of the gig being continued outside acoustically, similar to what happened on the band’s last visit to O2 Academy Bristol. However, it wasn’t until The Reverend jumped off the stage and was escorted by a bouncer through the side doors, we knew the impromptu busk was going ahead. After following a metre behind him I realised just how drunk he was! Once he had found a suitable perch near a wall, a nearby bouncer smelt a joint and shouted: “Who is smoking!” The Rev shouted “Yeah, who is smoking? Cause they better f***ing give me some”.  He busked his way through a three track encore including “Out Of The Shadows” followed by covers of The Specials’ “A Message To You Rudy” and The Human League’s – “Together In Electric Dreams”. It was a brilliant end to the night; very special indeed, a storming set tinged with humour throughout. It’s worth looking out for him at a future show. The latest tour dates are available at www.reverendmakers.com Want to hear more from Rhys? Check out his blog at http://charmingmanmusic.wordpress.com/ and read his interviews with Tim Burgess (The Charlatans), Peter Hook (Joy Division/New Order), Frank Turner and many more. To keep up to date with events at the O2 Academy Bristol go to www.o2academybristol.co.uk
Follow @Thefixmag
Recent Posts
We Like You…