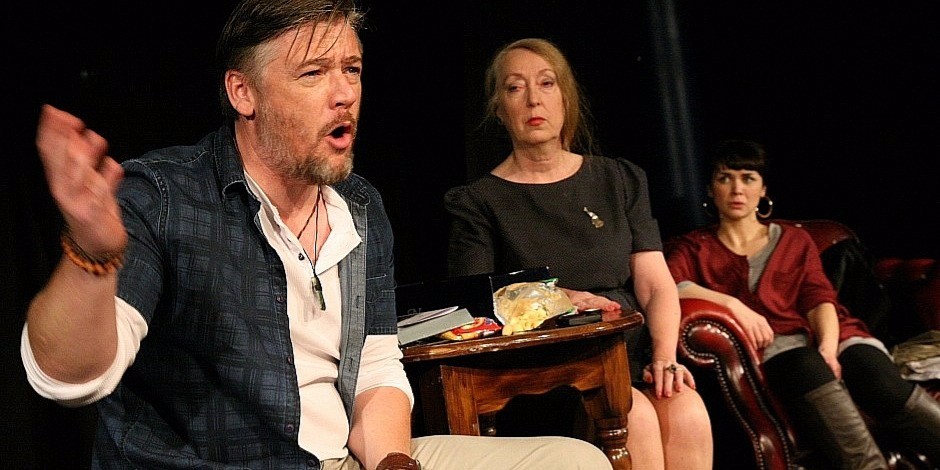 Glasgow’s Òran Mór Performing Arts Centre is where the ground-breaking lunchtime theatre programme A Play, a Pie and a Pint was founded in 2004 by David MacLennan. Presumably, the idea behind this initiative is that presenting bite-sized theatre means it’s a bit more accessible to the masses, especially when it’s offered over a lunchtime pie and pint. With a new production featuring weekly, they now commission and produce 38 new plays a year; producing the work of many of Scotland’s best known writers, as well as presenting the work of new, young playwrights, like Anita Vettesse.

Happy Hour, Anita’s first play, has come for a short stint (18-21 November) to Tobacco Factory Theatres before carrying on to Sheridan Cymru in Cardiff.

The play speaks of challenging family dynamics amidst the loss of the family Patriarch. In just over 30 minutes, we are given a glimpse into the lives of Tom (Stephen McCole) and Kay (Hannah Donaldson), returning home to help their mother Anne (Anne Lacey) scatter their father’s ashes. The set, simple and understated, but effective, depicts a private room within the family’s pub where a number of screaming matches take place between the three family members; all while the shoebox of the publican’s ashes sits in the centre of a small round wooden table, waiting to be laid to rest.

From the moment Kay makes her hurried entrance, we are disgusted by her  angry, desperate rants and raging anxiety, which we soon learn is due to, once again, being on the verge of bankruptcy. Anne enters, coming from the airport where she has picked up Tom and we are given the impression it’s been quite some time since he’s been home to visit since moving to Africa to “help” those in need.

As secrets rise to the surface, we quickly see that Tom’s time away has given him some clarity about the hurts of his past, causing Anne to face some hard truths about her parenting and lifestyle choices. All the while Kay is flapping (possibly a bit too much) about the stage, desperately trying to get her mother to agree to hand over a large chunk of money from her inheritance to fund her latest fledgling business idea.

The play rolls easily along with moments of dark humour, which cajoled a few nervous laughs from the audience at a number of points throughout, along with an emotionally-charged, poignant monologue from Tom.

Overall, Happy Hour was a quick shot of sitcom theatre, filled with drama and angst, not unlike what you’d find in an episode of Coronation Street. Add in the pie and the pint and you’ve got yourself a good, happy hour.