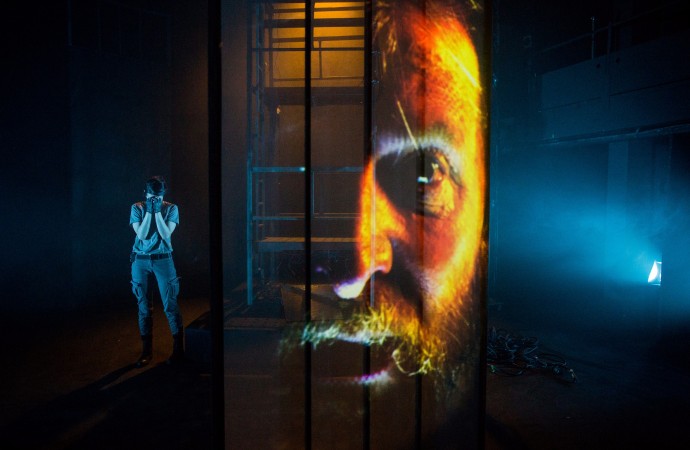 Dark Land Light House the latest offering from Bristol’s Sleepdogs theatre company, a collaboration between director Tanuja Amarasuriya and writer Timothy X Atack. A near-dystopian science fiction story, it is based in a universe similar to ours. A lighthouse orbits the unknown quantity of the ‘Dark Land’, beaming light into the cosmos in order to warn ships of its shores.

Lighthouse 5 – which may or may not be an allusion to Kurt Vonnegut’s sci-fi masterpiece Slaughterhouse-Five – is kept by a succession of volunteers, who each do their duty for ten years before handing over to the next keeper. Dark Land Light House focuses on the short but eventful tenure of Teller Ghent and her predecessor Parcival. Being a lighthouse keeper at the far reaches of space is a lonely existence, and leads Teller into hallucinations and philosophical tessellations, particularly as the oxygen in the lighthouse becomes depleted and she is haunted by her predecessor. The lighthouse keepers are destined to be alone – as Parcival explains to Teller during his handover, any experimentation with having two keepers has led to one of them murdering the other within days.

The sinister yet beguiling phenomenon at the centre of the play is the Dark Land. It inspires both fear and awe from the galaxy around it. Some cults intentionally fly their spaceships into it, believing it “forms the gates of heaven”. Parcival describes it as “dispossessive…all alone, all the time…nothing upon nothing”, while Teller questions its purpose: “you’re not a god, you’re not a gate, you’re not a journey.” It is sinister enough, but also bewitching, leading keepers to stare into it for days as their eyes liquidise. For Amarasuriya and Atack, the play questions “what it is we fear that would make us build a lighthouse to warn against it; and how it would feel to be just one human in the face of it.”

The performances by Jessica Macdonald as Teller and Derek Frood as Parcival are strong and backed up by Laura Dannequin as the omnipotent and unseen supercomputer Hypatia. The real plus points, however, are the beautiful and atmospheric soundtrack by Atack and composer North Sea Navigator, and the incredible lighting by Ben Pacey. Recreating an interstellar light beam is no mean feat, and it is pulled off superbly. The real-time storytelling is also complemented by projections of past and present lighthouse keepers, asking rhetorical questions and trawling through the past in order to drive the narrative. Birdsong and watery reflections provide an attachment to the more organic world Teller has left behind.

While it is not exactly clear what is going on all the time – particularly during moments of hallucination – there is excitement nonetheless, building to an electric climax. There are lulls in energy at points as some of the dialogue is lost, with an emphasis on the novelty of the science fiction clouding the storytelling. Nevertheless, Dark Land Light House is an ambitious and interesting play which prods at our fears and projections.