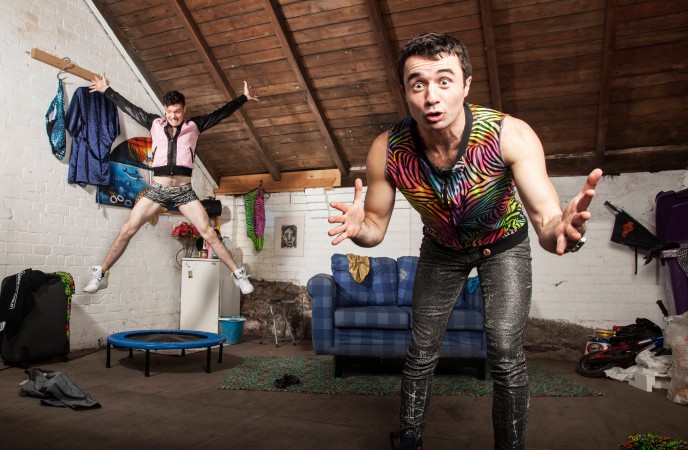 The Lords of Strut are in town! Filling in the back end of Circus City, the biennial Bristol festival now celebrating its second coming, the Irish duo have descended on the Tobacco Factory to wreak havoc, or, as the title of their performance suggests, Chaos.

Thus we see Sean engaging in an intense rendition of Whitney Houston’s ‘Dance With Somebody’ and Seamus dishing out sliced Hovis to the audience in an attempt to ‘give us everything’. A superbly sincere audience member is dragged from his seat to act as a talk show host, before being taught the principles of strutting.

While there are lulls in energy during the spoken word sections, Chaos is madcap buffoonery of a high level. A recommended age limit does not deter parents from bringing young children, and some of the nudity on stage will surely scar them for life – Seamus thrusts inappropriately over a juvenile, his smuggled budgie clearly on show.

This is a really silly show, but it is properly funny, and Lords of Strut clearly have a lot of fun on stage – this would make an excellent show for a festival crowd. There are some clever lines – in an appeal to the audience, they proclaim that ‘the more energy you give the thinner you will become’. At one stage, they explain that ‘we make everything we do look difficult’, but actually it is the simplistic ridiculousness of Chaos which makes it worth watching.