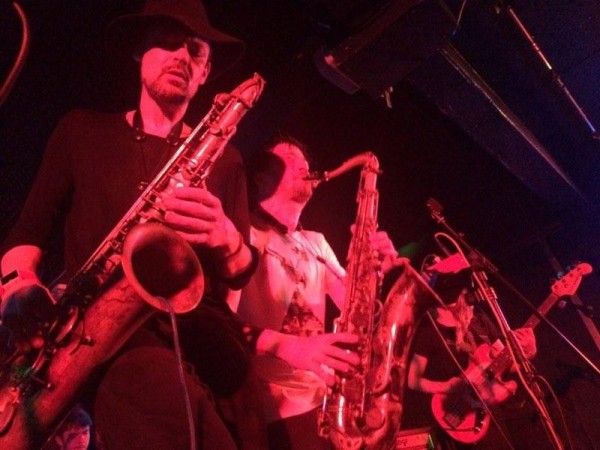 By the end of Melt Yourself Down’s gig at Bristol’s Exchange, the densely packed room had become less of a music venue and more of a loved up, frenzied sauna, the audience dripping with sweat and appreciation for the incredible display from the jazz punk sextet. The gig was a sadly all-too-rare appearance by the band, who are currently touring their well-received second album Last Evenings on Earth. The highly talented musicians are so in-demand or tied up with other projects – band leader Pete Wareham, for instance, has been part of the recent renaissance by Polar Bear – that they sadly rarely play together as Melt Yourself Down. What came across was a band with something to prove, and good Jesus did they manage it.

The set was a mixture of tracks from Last Evenings on Earth, including recent singles ‘God Of You’ and ‘Jump the Fire’, as well as older favourites such as ‘Kingdom of Kush’. The hard hitting fusion of punk and jazz with Nubian-inspired rhythms works perfectly in a live setting, combining superbly with the high energy of the band, a late (post-11pm) start and a throng of revellers ready to plough into each other with the activism of thrash metallers but the undiluted love of pilled-up ravers. 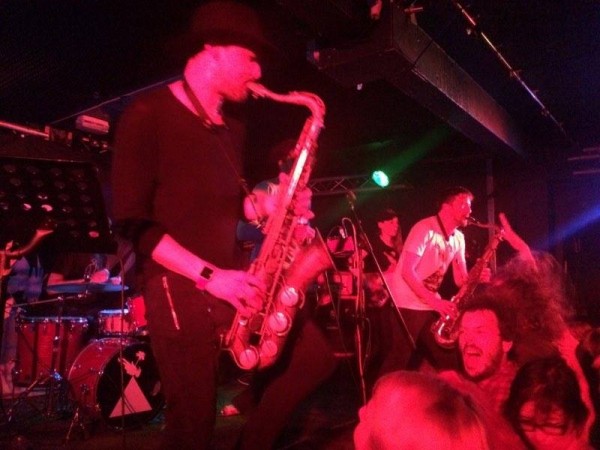 If there was one shame about the gig it was the absence of saxophonist Shabaka Hutchings, who is occupied elsewhere with his own band The Comet Is Coming, but his replacement – who shamefully remains unknown to this reviewer – stepped in to great effect. Elsewhere, the robust basslines of Ruth Goller, the frantic vocals of Kushal Gaya, and the crackling rhythms of Tom Skinner and Satin Singh brought the recorded material – which is already high-octane enough – to another level of hedonism. Wareham, meanwhile, straddled the front of the stage, sweat pouring profusely down his face, leading many in the crowd to be envious of the saxophone in his hands.

The band finished with an incredible encore of ‘We Are Enough’, ‘Fix My Life’ and ‘Release!’, by which time most of the crowd were either moshing, hugging or stage diving. Gaya completed the gig by snapping a photo with the crowd to send to his mother “12 thousand miles away”. It would be unsurprising if she felt the tremours emerging from Old Market, even from the other side of the planet.