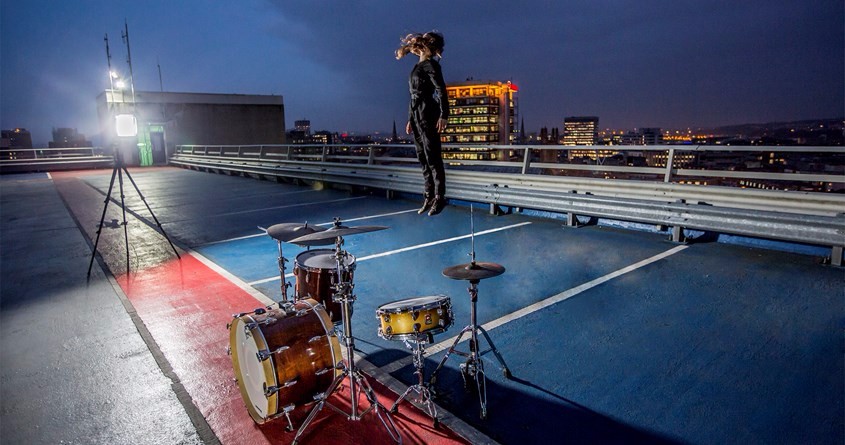 In considering this review, it should be noted that there is a chunky weight of positive bias behind it. When I saw Of Riders and Running Horses at last year’s Mayfest, I lauded it as “one of the most radiant shows you will ever see“, a beacon for the transformative possibilities of performance. I campaigned – successfully – for it to be selected by The Fix as the Best Stage show of 2015. As such, it is unsurprising that I would judge it’s return to Bristol for Mayfest 2016 as a triumphant one.

The production by Dan Canham and Still House takes over a ‘secret city centre location’, revealed to be the top deck of the NCP car park by King Street. A quintet of female dancers emerge from the midst of the crowd to move both as a collective body and as soloists, performing to live music soundtrack of throbbing melancholy and alertness by Luke Harney (AKA Typesun) and Sam Halmarack.

Of Riders and Running Horses immerses itself in a sense of becoming – the dance plays with emerging sensitivities and an openness to the felt world of tarmac and wind and rain and painted lines. The choice of a car park rooftop is an inspired one, as there is a collision with the dull, stolid concrete of everyday built environments, a communal animation of an urban space which is open to being played with and yet never is. The dictatorship of the automobile crumbles through performance and performativity, creating a space for a world of possibilities and movements and new subjectivities.

The performance makes an absolute intervention into the production of a space of tedium, erupting in joy and beauty and connectivity. Of Riders and Running Horses claims to take place regardless of the weather – hurricanes aside, perhaps – and this allows for even greater immersion into visceral senses and the somatic, bodily feeling. If anything, it is preferable to see the show during tempestuous weather – wind, hail and, in the case of tonight’s show, rain – than during a balmy sunsoaked evening. Audience members are splashed as the riders burst into the plentiful puddles, and good ol’ British drizzle is transformed into sparkling cascades. When the audience burst onto the ‘stage’ to dance at the finale of the show, such is the ebullience of the atmosphere that I do my knee in, jumping just too Goddamn high.