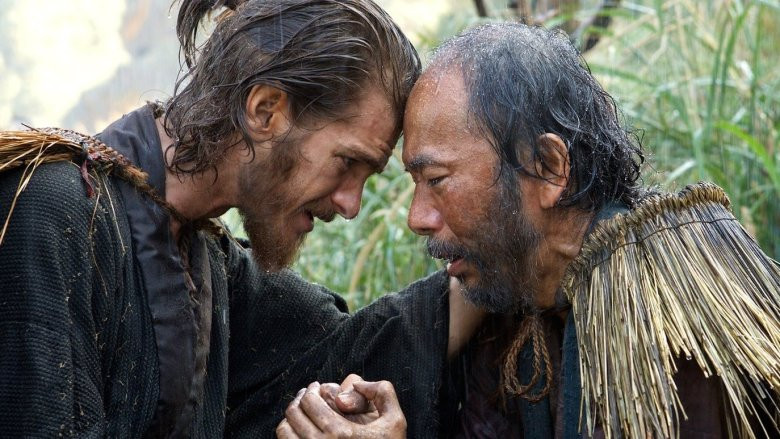 Martin Scorsese’s Silence is a markedly different film to his previous outing The Wolf of Wall Street in just about every single aspect of form, content and intention. Trading in a celebrity glitz of debauchery, expensive set pieces and consequence-less shocks and laughs for a slow and somber introspective journey, Scorsese certainly proves, as he has before, that he knows and understands how to handle different stories in the tones they deserve. It’s a shame then that Silence is a slight disappointment in his body of work, and that while the aforementioned tone was achieved, the rest of the film can be slightly straining at times to enjoy.

Embarking on an enticing premise that reminds the audience of both Joseph Conrad and Joffé’s 1986 Palme d’Or winning The Mission, Silence follows two 17th century Jesuit priests who travel to christophobic Japan in order to locate their mentor, who’s allegedly renounced his faith and taken up a Japanese identity. The scene is set for what should be an all-time classic of heavy themes such as dogma vs freedom of choice, colonialism vs cultural respect and the effects of long term suffering for faith, but instead the film feels muddled at points as to what exactly it wants to be.

The film has a bold structure of being made up of three acts that all tell different stories of these two priests on their mission as it goes on, and all three of those stories feel like they could be films unto themselves. Yet because of this “stitched together” feeling, we lose a sense of the “goal” of the film’s story at times. The previously mentioned muddled feeling can, at points, detract from the experience: is Silence a character piece? Is it a picaresque journey into the heart of darkness, where it’s just as much about the setting and side characters? It feels like it tries to do both at the same time, which leads to neither being particularly formed.

The performances are similarly uneven, though when they’re good, they’re exceptional. Andrew Garfield is our main character Father Rodrigues throughout the story, though the film cleverly underwrites this aspect until we’re almost a third of the way through. Garfield plays the part serviceably but frankly it’s hard to buy him as Portuguese, with an ever slipping accent sounding like a discordant note. While he doesn’t in any way destroy the film, it’s hard to see why he was cast, especially in the context of some of the later scenes in the film. Adam Driver meanwhile is brilliant as fellow traveller Father Garupe, bringing a much more believable accent and grim characterisation that feels more fitting for the setting of the story.

Liam Neeson plays the Kurtzian figure Father Ferreira, the man at the centre of the story, in a way that can only be described as typical Neeson. He does well at this role, but it’s like every other Liam Neeson role you’ve ever seen, including his Irish accent that makes no sense for him to have as this character but you sort of just go with it anyway. Kind of like Arnold Schwarzenegger. The stand out performance however is Yosuke Kubozuka in the role of Kichijiro, the spiritually tortured temporary guide and boon to our two leads. His emotional journey is the high point of the film and without it, would make the film an extremely boring affair.

Overall Silence isn’t a bad film, but it’s disappointing in that it squanders so much potential. Being a long time passion project that’s finally come to fruition, this film should be a dark epic that takes you into a mindset that makes you question the subject of the film, but instead you’re kept at arms reach by a po-faced story and an only adequate technical presentation that feels too “clean” despite being shot on location in Taiwan. It would be interested to see how Scorsese might handle a film that’s a mix of this film’s tone and story with the style and technical sophistication of his earlier works.