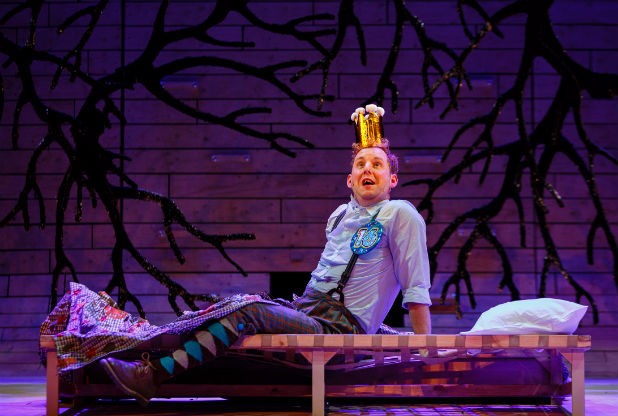 For this Christmas season, Bristol Old Vic have reawakened the classic tale of Sleeping Beauty. Charles Perrault’s fairy tale – made famous by the 1959 Disney film – is given a contemporary twist by Director Sally Cookson and co, switching the princess for a young Prince, Percy, who was loved by his kingdom but cursed to prick his finger and sleep for 100 years. The traditional Prince role is taken up by Deilen, a girl who accidentally wakes the sleeping Percy, not by a kiss of love but by a kiss of life – CPR.

For some reason, this gender swap was picked up by Tory MP Peter Bone, who denounced it as  – you guessed it – ‘political correctness gone mad‘. Perhaps he’s never seen Widow Twanky in full swing, or maybe he himself has been asleep for 100 years, waking to find himself disorientated in a year when stereotypical gender roles are challenged from time to time.

Either way, the key components are all there for a rollicking panto. Classic fairy tale? Tick. Cross-dressing? Tick. Magic and Mayhem? Tick. Cookson – the director behind the theatre’s 2012 show Peter Pan, as well as Tobacco Factory Theatres’ outstanding 2014 Christmas show 101 Dalmations – does superbly to animate Sleeping Beauty. The show rarely dips in energy, and it manages to borrow the vivacious nature of panto while leaving behind the schmaltz and cliché that can also come accompanied with the genre. The jokes are strong and generally emerge from surreality – the chorus of singing deer would make Monty Python proud.

The emerging friendship between Percy and Deilen is cute and ably performed by David Emmings and a charismatic Kezrena James respectively. Stu Goodwin, meanwhile, claims the best comic moments, tackling everything from a window cleaner to a stag and a shepherdess (the notably named Ms Peep). In taking on the role of the wicked auntie Sylvia – surely the most coveted of panto roles, that of the villainous dame – his masculine physique earns the most laughs.

What makes Sleeping Beauty really worth watching, however, is the music. From the introductory skiffle performance of a Bon Jovi/Madonna medley to a backing soundtrack of delicate piano, car chase hard rock and 80s soft pop saxophone, the band (Brian Hargreaves, Pat Moran and Ruth Hammond) is superb. A particular highlight is a take on the blues standard ‘Spoonful’, which allows Ewan Black to show of his great pipes, and the music, instead of jarring and breaking up the flow of the play, emerges naturally and only adds to it.

This time of year is all about treating oneself, and that’s exactly what Sleeping Beauty is: a Christmas treat.

Catch it at Bristol Old Vic until 17th January. Find out more.