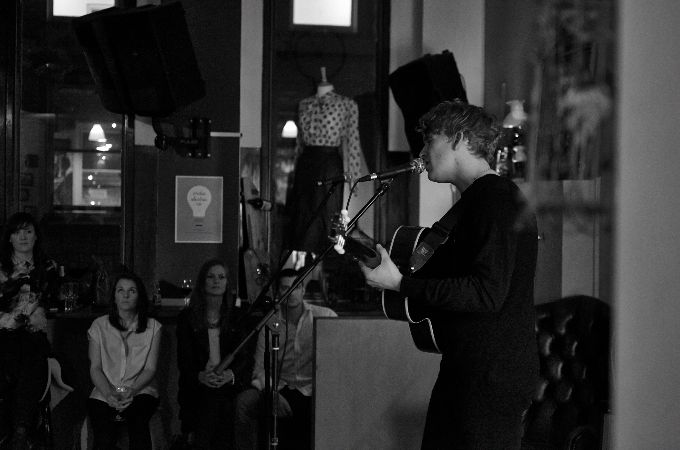 Spellbinding and hair tingling Hitcham born Rhodes (David Rhodes) arrives in Bristol armed with some sure-fire future hits – so perfectly formed you may suspect they were a gift from Zeus rather than a mortal creation – to enrapture Bristol’s Birdcage.Rhodes’ journey to this point, if he is to be believed, is truly a remarkable one as he claims having previously solely played bass in bands prior to this incarnation he didn’t actually pick up a guitar until January 2013 when he instantly “discovered he had a voice” (see Robert Johnson at the crossroads for a similarly instantaneous musical transformation).

Dressedhead to toe in charcoal black bar a small silver pendant, 24 year-old Rhodes exudes that Jamie XX kind of cool – thoughtful and urbane – and has a very softly spoken and modest stage presence.

After a long wait and in spite of the impersonal atmosphere generated by the venues seating layout (cluttered by pretty but impractical gentleman’s club chic chairs) a hushed silence descends on the crowd as lights dim and Rhodes begins.

Starting with the beautifully dark ‘Run’ with its sensitive delay drenched guitar picking and searing vocals (soaring higher than the sound system is capable of) the track exhibits Rhodes exquisite vocals that recall Anthony & the Johnsons or Jeff Buckley (see also ‘Worry’).

A police car hurtles by the huge open windows and the neon burst of the lights fills the room atmospherically as Rhodes ploughs on through other standouts like ‘Your Soul’ – think Foals after-party, ‘Worry’ – very early Coldplay, ‘Raise your Love’ – ‘Sin E’ era Jeff Buckley and tonight all come with a rapturous soundtrack from the audience.

Stumbling only once early on when he forgets the words on ‘Darker Side’ (but is quickly righted by the front row who recount them as fast he forget them) its all executed expertly and when he laments that “the world now I adore” you cant hep but feel this flow of affection will soon be reflected both ways as his popularity no doubt gathers momentum.

Morning EP is released by Rhodes Music on May 11.

Photos by Will Fahy: www.willfahy.co.uk/fresh