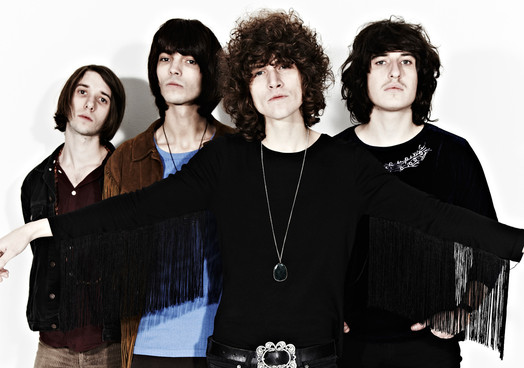 Plucked from internet obscurity just two short years ago when the self-produced YouTube postings of James Bagshaw and Thomas Walmsley caught the attention of Heavenly Records, psychedelic rock revivalists Temples have since emerged as one of Britain’s finest new bands. The swiftness of the Kettering quartet’s ascent in the succeeding 24 months can be measured by their achievements in 2014: Appearances at Coachella and Glastonbury have cemented the band’s reputation as a solid live act and their debut album Sun Structures achieved both a top ten UK chart position and Rough Trade’s album of the year.

The fact that their previous visit to Bristol resulted in a near sell-out performance at the Thekla while tonight’s show at the larger Trinity Centre comfortably sold out with time to spare is another sign of their progress. In the slow, deliberate build-up and extended instrumental jam of opening track ‘Sun Structures’, there is instant evidence of an evolving band increasingly comfortable in its own skin. In similar vein, the steady stomp of ‘A Question isn’t Answered’, is prolonged into another dynamic instrumental sprawl.

After a series of dates in Europe, frontman Bagshaw seems temporarily confused as to whether or not to address the audience as “England” or “Bristol” in his introduction to the excellent ‘The Golden Throne’; its crisp intro and chopped guitar chords lead to a Beatle-esque chorus, possibly the group’s most melodic since debut single ‘Shelter Song’. The replacing of Bagshaw’s Epiphone guitar with a 12 string Rickenbacker then signals the whirling Byrds inspired jangle of ‘Colours To Life.’

Unabashed in their musical reverence for 1960s psychedelia, Temples are all cosmic lyrics, spiralling keyboard/guitar licks and looping wah-wah freak-outs; all this perhaps could descend into revivalist, copy-cat calamity if it weren’t for the band’s tasteful verse-chorus songwriting and sentient ear for a catchy riff; case in point is B-side ‘Ankh’; sounding more hypnotic live than on record, Bagshaw’s lead guitar mingles with Adam Smith’s keyboard figure to serve up what is possibly Temples’ tastiest riff. Of course, it also helps that they can play; Warmsley in particular anchors his bandmates’ contributions with the excellent, octave spanning inventiveness of his bass guitar playing.

Considering the spaced-out, hallucinogenic moods of Temples’ music, the addition of a kaleidoscopic visual element in the form of Mad Alchemy’s Liquid Lightshow is a welcome one. Mad Alchemy stands at a laptop and delivers a lysergic, Jackson Pollock phantasmagoria of shifting colours as an apposite visage to the dreamy soundscapes emerging from the stage; an aspect missing from Temples’ Thekla performance, tonight’s show significantly benefits from its inclusion.

Bagshaw decides to “slow it down” with ‘Move with the Season,’ the closest Temples have come to balladeering and a tune that provides the platform for Bagshaw to display some impressive, high-register vocals. Back in more familiar territory, the compelling momentum shifts of ‘Keep in the Dark’ give way to yet more assured riffing in the form of ‘Sand Dance.’

‘Shelter Song’ is the final song preceding the encore but not before Bagshaw is met with a paltry response when he enquires as to the crowd’s general levels of enjoyment. While the songs are well received, the occasional lack of audience response, especially considering it’s the weekend, is slightly curious; perhaps Bagshaw isn’t verbal enough to command attention above the boozy sociality of a Saturday night or maybe Temples’ brand of unashamedly retro psychedelia is so authentic as to have entranced them in a distant reverie of free love, beatniks and bangles. Either way, there’s just time for ‘Mesmerise’ before the band depart for good.

It’s true that some reviews of Sun Structures seemed reticent in their praise due to Temples’ complete immersion in the past and deference to their influences. Even if they remain unconcerned with forming their own identity, adroit songwriting, a judicious ear for a hook and tight live performance will see that Temples will do just fine.