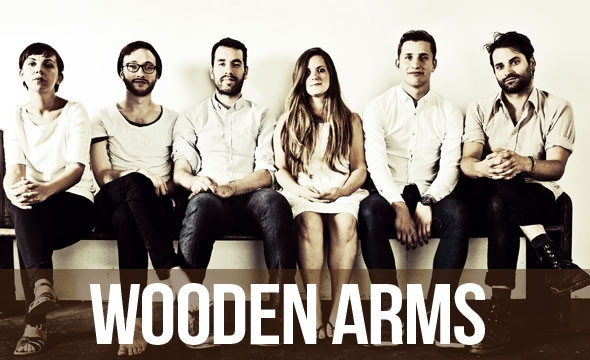 Norfolk six piece Wooden Arms bring their eclectic melding of classical music structures and instrumentation with modern folk melodies to The Louisiana later this week. As well as the de rigueur instruments of piano, guitars and drums, the Norwich band also utilise violin, cello and brass to deliver charming chamber music that somehow manages to feel both anachronistic and current.

Their rich orchestral approach is tempered by a contemporary outlook of percussive beats and ambient samples that achieve a distinctive, classical crossover sound; case in point is ‘December’, taken from their 2014 album ‘Tide’- a song the band have described as a “melancholic mariachi march with a trip-hop beat”.

Achieving national radio play on Radio 2 and 6 Music courtesy of the likes of Lauren Laverne, Gideon Coe and Mark Radcliffe, the unique listening experience provided by Wooden Arms has seen them garner comparisons to acts such as Sigur Ros and Grizzly Bear. Their list of influences meanwhile can only really be described as diverse – it’s not often that one sees Chopin, Mozart, Andrew Bird and Ed Harcourt all included on the same list.

For a sample of the Wooden Arms sound, their track ‘False Start’ is a good place to begin; featuring delicate piano, picked guitar, yearning strings and aching choral harmonies, it makes for something hauntingly pretty. Check it out below:

The band will also be releasing a live EP called ‘A Whisper and a Shout’ during this current tour and it will only be available at the shows.

Wooden Arms play The Louisiana, Bristol on Thursday 30 April with our old friends The Lasting Days.

To find out more visit: www.woodenarms.co.uk