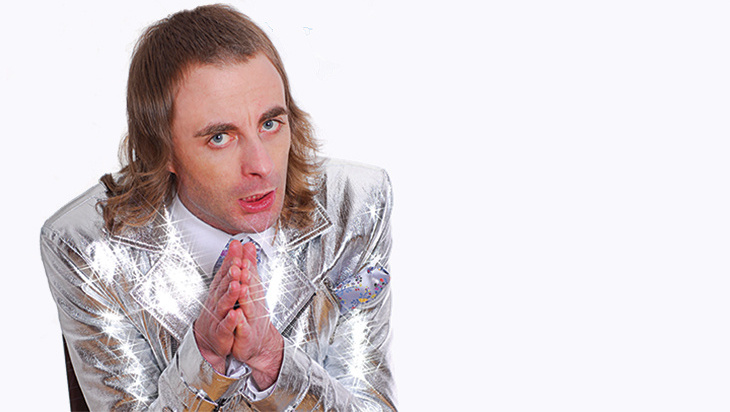 Ahead of comedian Paul Foot’s upcoming gig at Colston Hall Lantern this Friday, we decided to drop him a line to get his thoughts on Bargain Hunt, tennis and Angela Lansbury.

As always the title of my new show has absolutely nothing to do with the content of the show, although it is a verbal symphony of sorts. Audiences can expect rants, disturbances, glimpses into other worlds, the latest version of my madness and there are sharks this time too. It’s hard to describe really, it’s both a thoughtful and explosive show. I’m quite proud of it but it also scares me a bit.

The Daily Express has likened you to “a rare exotic bird”. Do you think this is fair?

I do feel akin to birds but more lately, mammals. I rented a cottage in Kent to write this show and I befriended a baby bat that I found in the rafters one evening. It sat next to me on the sofa and we watched Bargain Hunt, then I let it go. Even more recently I’ve become quite attached to salad ingredients, I’m a bit obsessed with heirloom tomatoes – very good listeners.

You studied Mathematics at Oxford. What is your favourite number?

Once at a secret show we actually determined the funniest number by measuring audience laughter. I think it was minus 2020 point nothing to the square root of death. Or was it just three in the end? I like zero too which would be the number of tickets available to see me on tour if my staff weren’t so frigging useless.

What do you like best about Bristol, and what do you dislike the most?

There’s a lot to like in Bristol. The Old Vic of course, a rich cultural history that encompasses great minds like Coleridge, and there’s the bridge.
I like the people in Bristol, there’s an intriguing glimmer to their skin and a certain crease to their clothing that suggests to me as I look out from the stage a creed of people who enjoy a healthy balance of both happiness and control. There is nothing I do not like about Bristol, but on saying that I probably wouldn’t live here.

Colston Hall, where you’re performing, is famous for hosting The Beatles. If you were a Beatle, which one would you be?

I would be Heinrich, the fifth Beatle that nobody saw because he focused more on the admin side of things. When the others were onstage Heinrich would be in the wings sorting out the stock sheets and ordering more pins for the badge press. People remember the Beatles for their songs but I feel a lot of people forget the fascinating merchandise story that ran in parallel with the band’s success. There were some real highlights like when Heinrich accidentally ordered too many Beatles aprons and had to sell them at a reduced price.

What do you like to do in your downtime?

I’m voraciously engrossed in an overwhelming cycle of watercolours that I call my Disturbances. Connoisseurs buy them after my shows and then I have to set to work on replacing them. They are all individually beautiful and disturbing. I also like to watch the tennis and I like talking to my connoisseurs on Twitter and smiling at their faces and lives, many of them do great things.

Do you have any strange rider requests when you’re on tour?

Not really. I have a long-serving downtrodden assistant who looks after me. At the moment I quite like to have a packet of sushi before the show as it energises me without bloating me out. I also have my own LED botanical rock garden and an accompanying neon plastic rockery that I take everywhere with me. It’s about twenty feet by thirty feet and I like to sit in it with my own thoughts before the show. It has twenty battery powered hedgehogs who can sing in gentle harmony. I usually switch them off though, they’re a bit irritating actually, I don’t know why I insist on taking them everywhere.

Tell us three secrets about yourself.

I once had an affair with Angela Lansbury. It was disastrous but very funny at the time.

On certain days when I’m not feeling up for it I employ three ducks to work for me by standing on top of each other inside a human jacket. In Buckinghamshire nobody even blinks, but that’s another story.

I collect architects. I ran out of space in 2008 though so I had a shed built especially in the lakes.