‘Hysterical’ and ‘jaunty’ are not normally the first words that spring to mind when one thinks of economic depravation, or the grisly events of a Civil War. Yet, somehow, these seem like the most fitting adjectives when defining Sean O’Casey’s ‘Juno and the Paycock’. 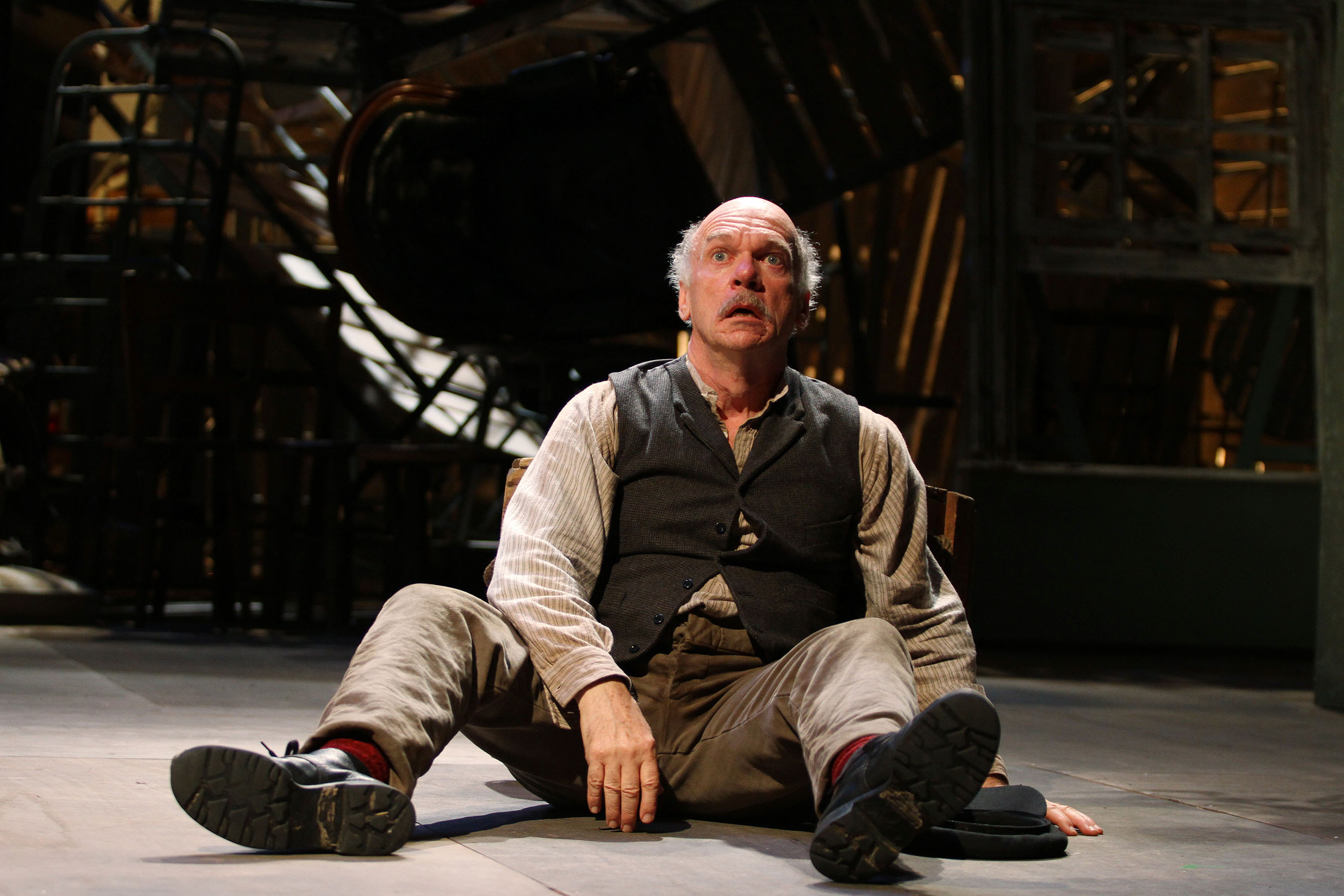 The second play of his Dublin Trilogy, ‘Juno’ focuses on the Irish Civil War of 1922-23 and principally its impact upon the working class poor, of an unnamed North Dublin slum tenement.

This was a time of great upheaval in Ireland. Only just free from the shackles of British occupation – a victory stained with the blood of the Easter Rising ‘martyrs’ and a guerrilla war of Independence (1919-1921) – Ireland was now being torn asunder by the ravages of a vicious Civil War and many lives, especially those amongst the poorest sections of society, were hanging by a thread.

One such family, hanging by just such a slender thread, are O’Casey’s Boyles.

Led by the matriarchal Juno (Nimah Cusack), the layabout ‘Captain’ Jack (Des McAleer) and flanked by their on-strike daughter Mary (Maureen O’Connell) and ‘die-hard’ Republican son Johnny (Donal Gallery) – shorn of his arm from the blast of an English shell during the War of Independence – the Boyles are a testament to the ‘caught in the crossfire’ generation that Casey knew all too well; a family desperately trying to keep their heads above water in the face of a tempest of violence exploding outside their door. 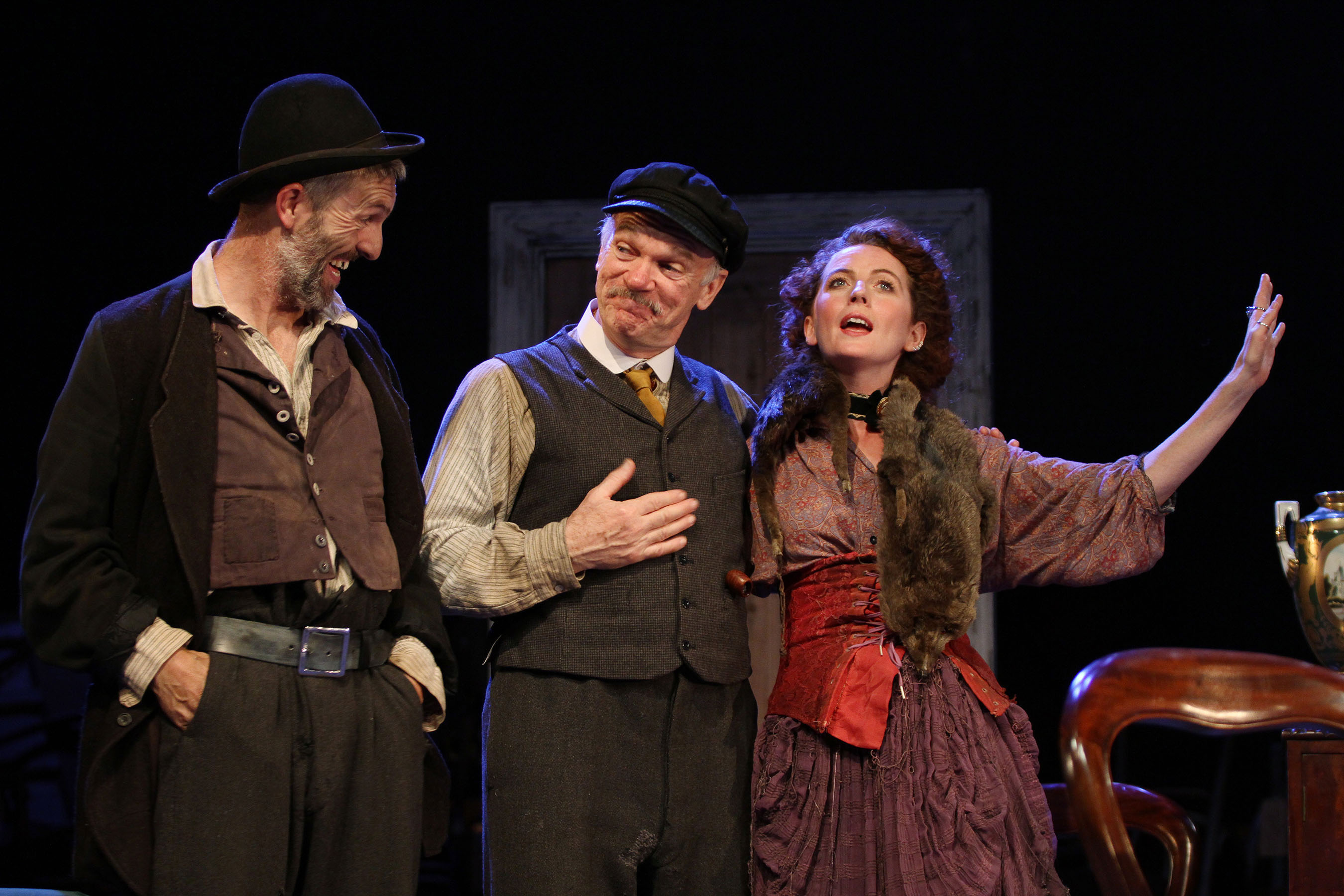 It is the very stark contrast of finding humour amongst the rubble that underlies the very narrative here – the resoluteness of a downtrodden group still managing to find relief in dance, music and general gaiety despite their plight. This very concept of wretchedness juxtaposed with jollity is actually reflected in the stage arrangements themselves, with Conor Murphy (designer) due great praise for what is a true masterpiece of a set. A single door stands in front of a vast mound of authentic looking Victorian junk (an entangled jumble of abandoned furniture and skewed cast iron), upon which the house band sit and perform and through which visitors to the Boyles abode must cautiously navigate a path. The fact that the entirety of the action takes place in this single room is completely forgotten, given the myriad of activity provided by the open back to the stage and fine lighting (which silhouettes the cast on a large dark canvas like puppets).

In addition to the fine stage design the compositions by Peter Coyte are equally stunning. One of the few regrets in the entire performance is that there is not more musical accompaniment – so spine tingly effective are the short salvos of melody. 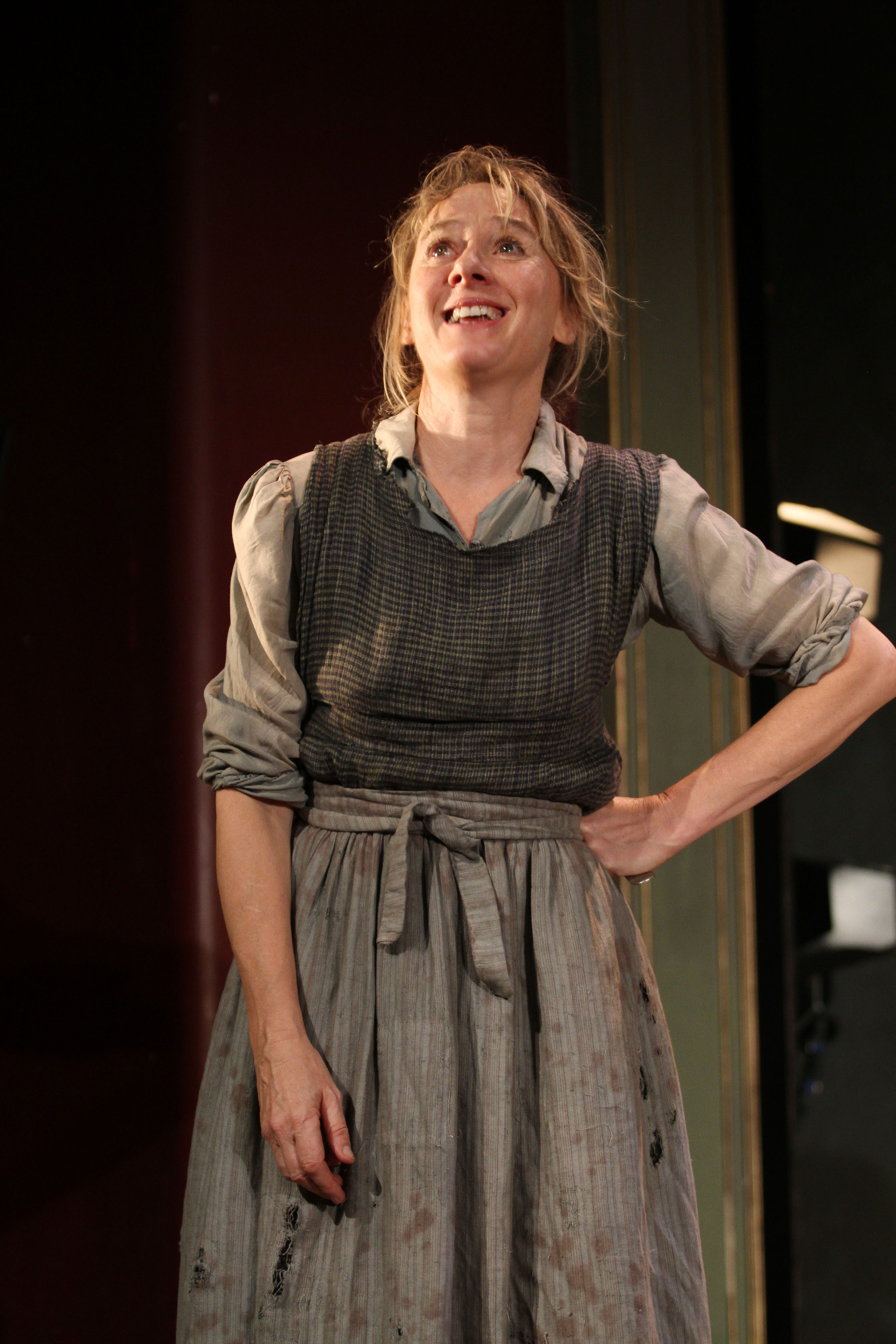 Whilst the stage and music are in some respects the stars of the show, the Captain is possibly the standout performer amongst the cast, with his equally good-for-nothing neighbour, Joxer Daly (Louis Dempsey), providing the other half of a comedy double-act that illuminates the stage with a comic rapport that recalls Laurel and Hardy at their finest. The worries of the land seem as far from their minds as is humanly possible, as they seek out increasingly creative ways of avoiding work.

The Captain is part rogue (“Whose business is it, other than mine, when I visit a snug [pub]!”), part philosopher (“Isn’t all religions curious? If they weren’t you wouldn’t get anyone to believe in them”) and is carried off masterfully by McAleer. 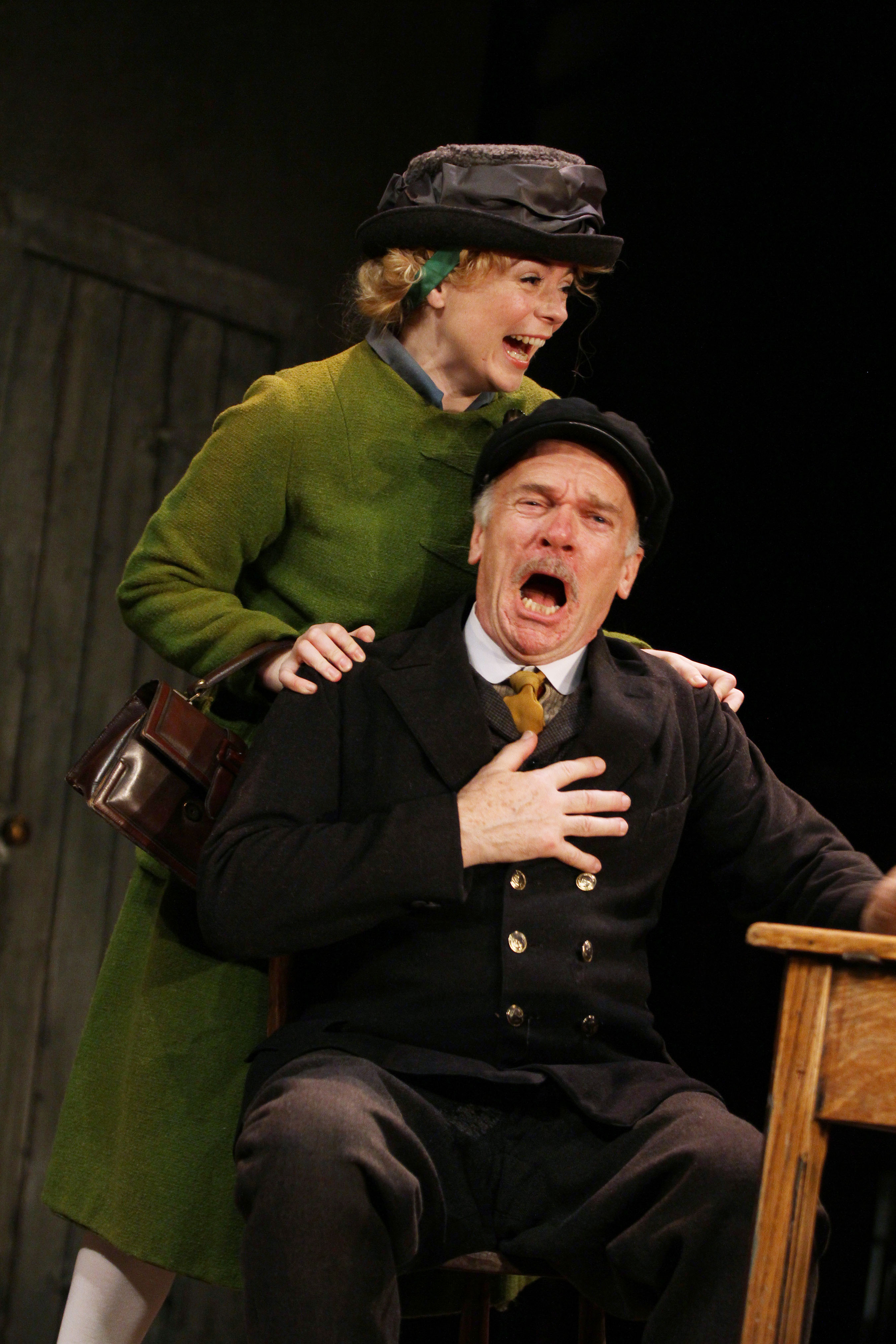 With Captain Jack off squandering the families last “micks”, it is left to his long suffering wife, Juno, to bear the weight of holding the family together by herself. While Juno is certainly a far more serious character, she is still afforded many comical moments – the highlight being her confrontation with the Captain over his questionable  nautical tales: “I hear them all calling you the Captain but you’ve only been on the sea twice…your no Columbus are you!” 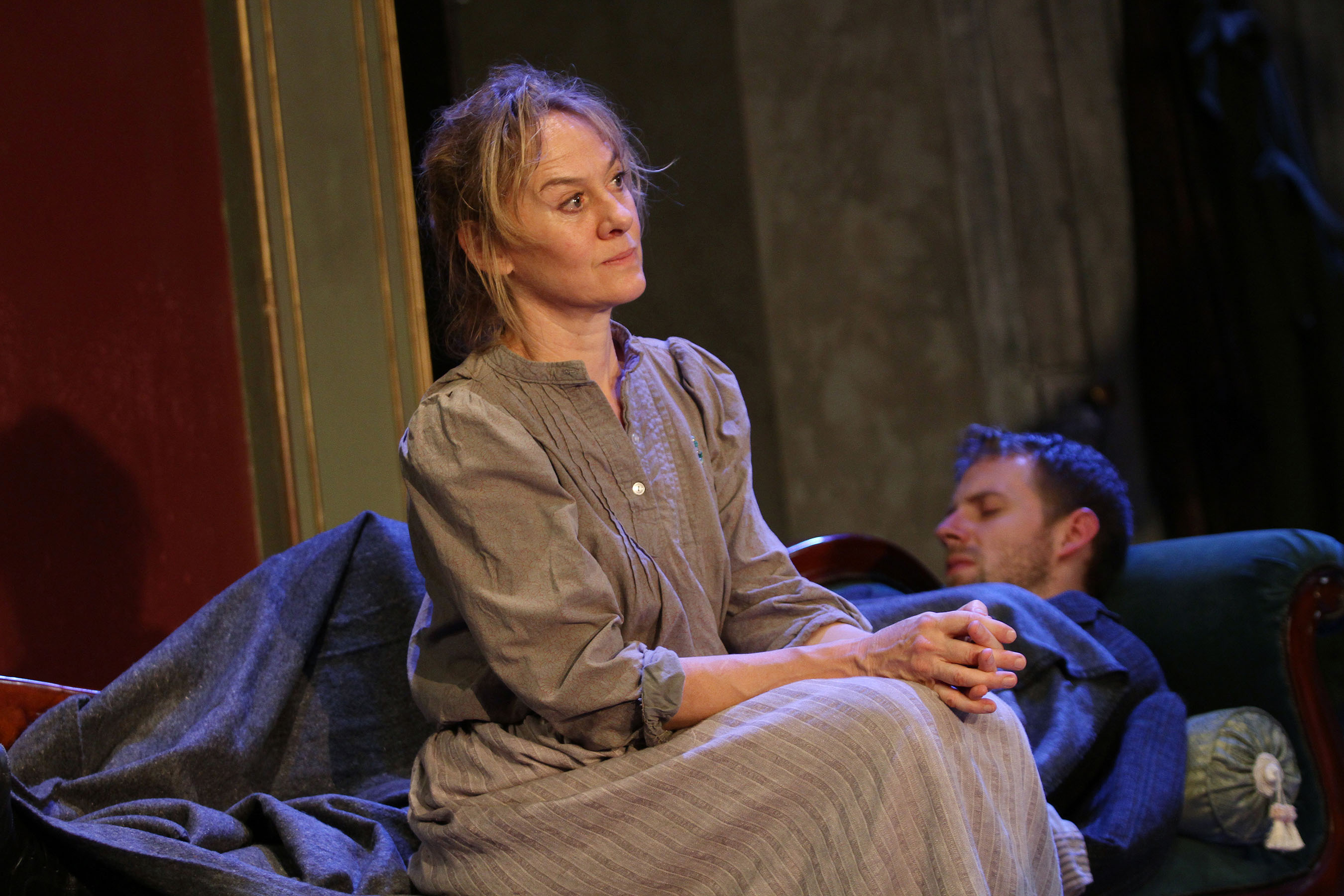 Special mention also goes to Aoife McMahon as Mrs Masie Madigan (a self confessed “nightingale in mating season”) , whose haunting voice provides a very touching moment in the heart of the action as the tide begins to turn sour.