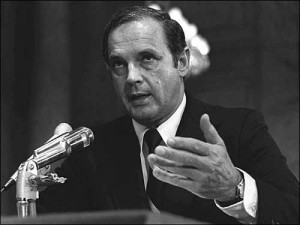 The University of Bristol welcomed Alexander Butterfield, former White House staffer to Richard Nixon, for the first in its Festival of History: Past Matters programme of events. What resulted was a fascinating insight into the workings of a paranoid, if underappreciated, man who became the first and only President to resign from office following the Watergate scandal.

It was clear from the outset that Butterfield, integral to providing the evidence that brought Nixon down, is still very loyal to his former boss. He is at pains to list Nixon’s achievements, including establishing the Environmental Protection Agency, lowering the voting age to 18 and bringing China into the international community. Nixon’s legacy, Butterfield suggests, has been overshadowed by scandal.

However, what Butterfield also makes clear is that there were two distinct sides to Nixon. There was the ‘presidential’ side, highly accomplished and thorough in his work. Then there was the ‘other’ side: a deeply paranoid, shy and socially awkward man, nervous around strangers and unable to take direct criticism or compliment. Having risen to the highest office for a politician, a profession of extroverts, he was the ultimate introvert.

The highlights of Butterfield’s interview are his insights into Nixon’s personal character. When the two first met, for roughly 5 minutes, Nixon ‘didn’t say one intelligible word’. This was a man who ‘couldn’t walk and chew gum at the same time’, and had to ask others to carry his possessions as he would only drop them himself. In Butterfield’s words, Nixon was ‘the strangest person I’ve ever met in my life.’

What is slightly lacking in the interview is a focus on Watergate – and this is probably what most people turned up for. Having already over-run by 25 minutes, there simply was not time to cover the scandal in-depth. Butterfield gave key evidence on the taping going on in the White House, which only he and 7 others were aware of.

In all, the talk was another excellent example of the free public events put on by the University and other organisations around the city, drawing in outstanding speakers from around the world to present on a dazzling array of topics.