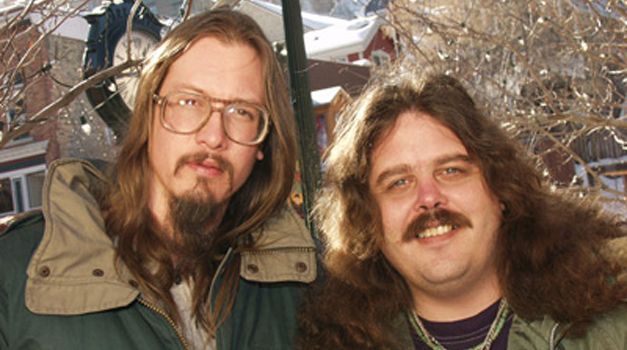 “I know that when I was growing up, I had all the potential in the world,” thus asserts fiercely ambitious independent filmmaker Mark Borchardt at the beginning of Chris Smith’s documentary American Movie. To imbue the self with a sense of being unique is no doubt a common occurrence in a world full of people who see themselves as among the great undiscovered; where 30 year old Borchardt does seem unique however, is in the ferocity in which he pursues his quest for recognition and how he won’t let anything, including a visible lack of any coherent talent, stand in his way of obtaining a piece of the ‘American Dream.’

Influenced by such cult horror movies as The Texas Chainsaw Massacre, and Night of The Living Dead, the Wisconsin native procured an 8mm camera from a neighbour at the age of 12 and, from that moment on, he has seemingly put every ounce of his energy, ambition and finances towards writing and directing the “Great American Movie”; the culmination of this desire emerging in the form of the semi-autobiographical account of his early life: Northwestern.

Smith follows Borchardt as, with a handful of associates, volunteers and friends including Mike Schank, an ex-drug and alcohol addicted, rock-music loving tribute to the perpetually monotone, he holds a series of production meetings to discuss plans for Northwestern. It becomes increasingly clear that, despite an unwavering assuredness and an obvious passion for his craft, Borchardt is inarticulate in getting his vision across and never can quite shake an aura of bungling amateurism. By the 4th production meeting there is an attendance of two and, depleted of funds, it’s time for a rethink.

The contingency plan comes in the form of Coven – a 35 minute short that Borchardt started 2 years previous and, with the project’s completion and sale of 3,000 copies, he will be able to resume work on his main feature. Pronounced ‘CO-ven’(to avoid, we’re told, rhyming with oven) the project is rife with mishaps and unintentionally humorous moments. Bereft of actors for one particular scene, for example, Borchardt has no choice but to enlist his mother despite impeding on her plans to go grocery shopping. We then see him instructing his extras to look “more menancing”; a direction that, even when pronounced correctly, would be rather hard to achieve considering the all-encompassing shroud of the actor’s costumes.

As the film develops, we learn more about Borchardt’s life outside of his aspiring film career; we discover that he has sired three children with a woman who left him three years ago and, along with $3,600 owed in child support, he also has other debts including $10,000 to his father and $1,500 to the IRS. He is also a man beginning his forth decade still living with his parents and performing the menial jobs of delivering newspapers and acting as caretaker at a local cemetery. Growing up with the constant bickering of his parents and seemingly alienated from his brothers (particularly Alex who assuredly informs us that Borchardt would be far more suited to factory work), his life has been one of a considerable dysfunction that he has seemingly kept to the periphery of his main ambitions.

Through Borchardt’s constant scrambling around for funds, Uncle Bill is introduced as one of the documentary’s central players. A parsimonious and infirm 82 year old man with approximately $280,000 to his name, he reluctantly stumps up the $3,000 needed to get the film back in production. It’s Uncle Bill who provides much of the movie’s pathos; the scene where Borchardt shares a joke with his uncle while bathing him is a warm testament to familial bonds while Bill’s denture-clacking, 31 failed takes of Coven’s opening dialogue, and Borchardt’s subsequent dismay, are genuinely funny; simultaneously, it’s also quite sad – a young man’s escaping dream and the incremental uselessness of old age providing an existential absurdity that delivers a sharper edge to the humour.

Since winning the Grand Jury Prize for Documentary at the 1999 Sundance Film Festival, Smith has had to field questions regarding exploitation and mockery of his subjects in American Movie. Those that have levelled these criticisms have missed the point that, amongst all the buffoonery, at the film’s heart beats a tenderness that serves not as a mocking but a celebration of Borchardt and his crew of lovable misfits. This is perhaps best encapsulated in Mike Schank, Borchardt’s ever present sidekick and the film’s true star. His description of their first becoming friends, of finding a vodka quaffing pal to save him from his loneliness, is extremely touching and his late night reassurance to Borchardt that he will be back to join him in the editing suite “as soon as I wake up,” is indicative of a loyalty that we all desire but perhaps don’t receive from our firmest of friends. These moments simply wouldn’t work if Smith was merely looking down his nose at a pair of ‘losers.’

It should be acknowledged however, that Smith is obviously more interested in the sweet blindness of the crusade than he is of Borchardt’s directorial vision. It is a quixotic pursuit that seems to be fuelled as much by Borchardt’s palpable fear of being ordinary as by a fervent desire to create and achieve. We see a visibly drunk Borchardt, after Green Bay Packers’ victory at Superbowl XXXI, berate his cheerfully passive Mother for being a “40 hour job working mother fucker” and, referring to a fecal encounter at his cemetery job, his life seems to reach an impasse when he philosophizes that “I’m 30 years old and in about 10 seconds I’ve got to start cleaning up someone’s shit, man.”

Coven finally completed, the premiere of his horror short serves far less as a manifestation of his achievement as a poignant reminder of how far away Borchardt is from achieving his dreams. The sight of an extremely frail Uncle Bill nearly stumbling to the ground shortly after his nephew solitarily applauds the arrival of his ‘Executive Producer,’ is a million miles away from any red-carpeted glamour that Borchardt would’ve hungrily envisioned as a child.

With American Movie, Chris Smith has given us a wistful, funny but often sad tale that serves as a parable as to both the beguiling and toxic characteristics of the ‘American Dream’ and also the ideological value of possessing aspirations for their own sake and working hard to achieve their realisation. It is also about the power of illusion; this never so manifest as in the film’s final scene where a forcefully sincere Borchardt, buoyed by the completion of ‘Coven,’ attempts to galvanise his decrepit uncle with talk of the next big move. ‘I’ll be damned if I don’t get the American Dream,” says a resolute Borchardt. His uncle merely sits silently forward, his head facing the ground and it is clear that he is not long for this world; it is no surprise when we learn at the film’s close that Bill passed away shortly after filming.