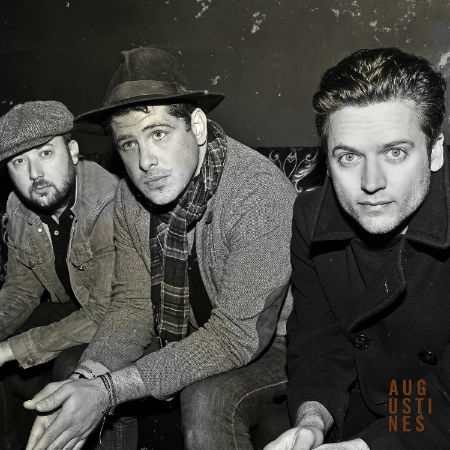 Ahead of their gig at The Trinity Centre in Bristol on Thursday 17th April, Eric Sanderson of the phenomenal US indie rockers Augustines spoke to Stewart Eley to tell The Fix about their new material and upcoming UK tour. What influenced your songwriting for the new album? We toured ‘Rise Ye Sunken Ships’ (Augustines’ debut album) for over 250 shows in 23 countries. During that time our lives completely changed, as did our relationships, with the music we make. Talking with people and reflecting on our lives is at the core of this record. How did recording the new self-titled album ‘Augustines’ differ to the previous album? When we recorded ‘Rise’ there was obstacle after obstacle holding us back from actually working on the recordings. This is one of the major reasons it took so long. On ‘Augustines’ we finally had the opportunity to focus solely on our music. The other major major change was addition of Rob Allen. Rob brought his life experiences and musicality to this record. It’s where we solidified our identity as a band. Any favourite tracks off the new album? At this point every song is like a child. So asking if there is a favorite isn’t really fair. I connect with them all on different ways, as they express different feelings. Has picking the set list been difficult for this tour? Any agonising decisions on what songs to leave out? It’s actually been amazing. For the first time we actually have more songs than we have time to play. So in true Augustines style we are pushing the limits. On a few gigs on this last US tour we played for over two hours at a couple of shows. This isn’t something that is written into the set. It happens when the mood is right. I love playing with Bill and Rob because they are so flexible. We make changes throughout the set every night. What has the has been the reaction of the fans on your tour of American so far? Sweaty, smiling, singing at the top of their lungs, sharing a drink with us, sharing stories. Joy. How are you feeling about your return to the UK and specifically Bristol? We travelled to the UK fifteen times last album. We basically lived there. Reading and Leeds was certainly a highlight as was our show at Shepard’s Bush. But we also recorded at Abbey Road, Air Studios and the BBC. I’m just humbled that the UK cares about our music as much as you do. I absolutely love the UK. We played Bristol three or so times now and every time has special. We’ve meet a lot of great people in Bristol and developed some strong friendships. Which other acts, if any, are you listening to at the moment? I’m on a James Blake kick right now. His Joni Mitchell cover is absolutely stunning. I’m really impressed. Once all the gigging is done, what next? Jetting off anywhere for a rest? After this run we will probably have a week or two off then out we go again. We will be touring ‘Augustines’ for at least another year to year and a half. So we will be back. Find out more about the band at www.weareaugustines.com
Follow @Thefixmag
Recent Posts
We Like You…