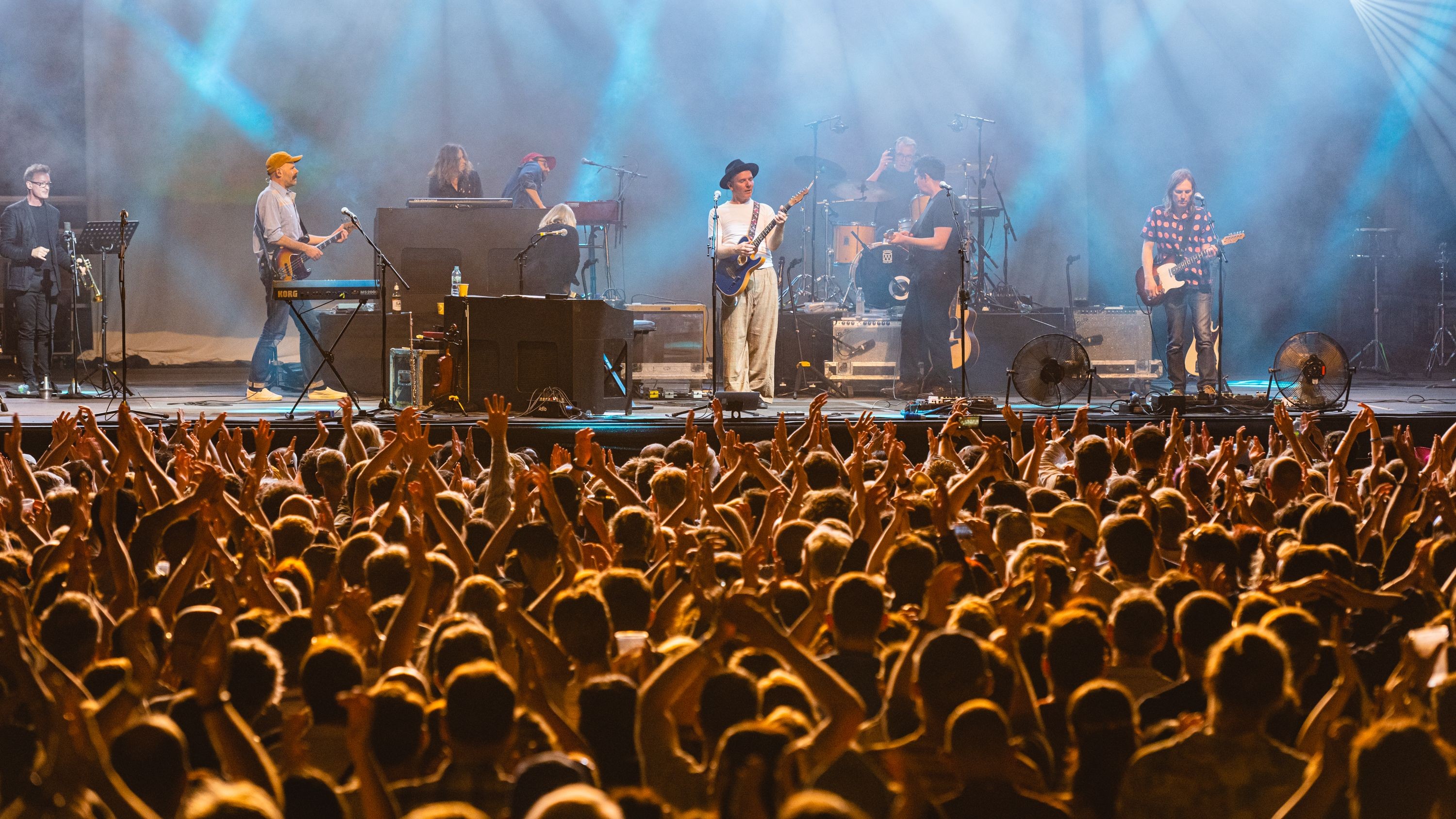 “I don’t mind having a morning off, but not two and a half years” says frontman and prime songwriter Stuart Murdoch halfway through tonight’s set. Indeed, it’s been a long time coming; essentially a curtain raiser for Bristol’s Harbourside Festival, this show was postponed twice in the covid ravaged summers of 2020 and 2021. So, after a two year wait, Glaswegian cult indie gods Belle & Sebastian were finally able to grace the balmy and beautiful surroundings of Canon’s Marsh Amphitheatre.

Tonight we hear tracks that span ten of the band’s eleven albums from what is now a twenty six year career (2002’s Storytelling is the evening’s only unrepresented record) and, led by an ebullient and garrulous Murdoch, there’s very much an air of merriment to compliment the fine selection of melodies on offer. During blustery new track ‘Unnecessary Drama’ – featuring guitarist Stevie Jackson’s whailing bursts of harmonica – a gyrating Murdoch ends up looking akin to Ian Curtis while perched atop a speaker stack. Subsequently he declares “Oh, my god, Bristol, you are a beautiful sight” before commenting on the heavy police presence in the city; “Is your town quite tasty?” he asks.

“We’re going back 65 years for the next song” is Murdoch’s intro to ‘She’s Losing It’ – from the band’s 1996 debut Tigermilk – and it’s aged rather well; the typically artful melody is accentuated by the signature trumpet break and a staggered coda summons an extra dash of drama. During the elegantly pensive ‘I Want The World To Stop’, effectively a duet with second singer Sarah Martin, Murdoch lunges back and forth before bouncing around the stage like Bobby Vee’s titular Rubber Ball. 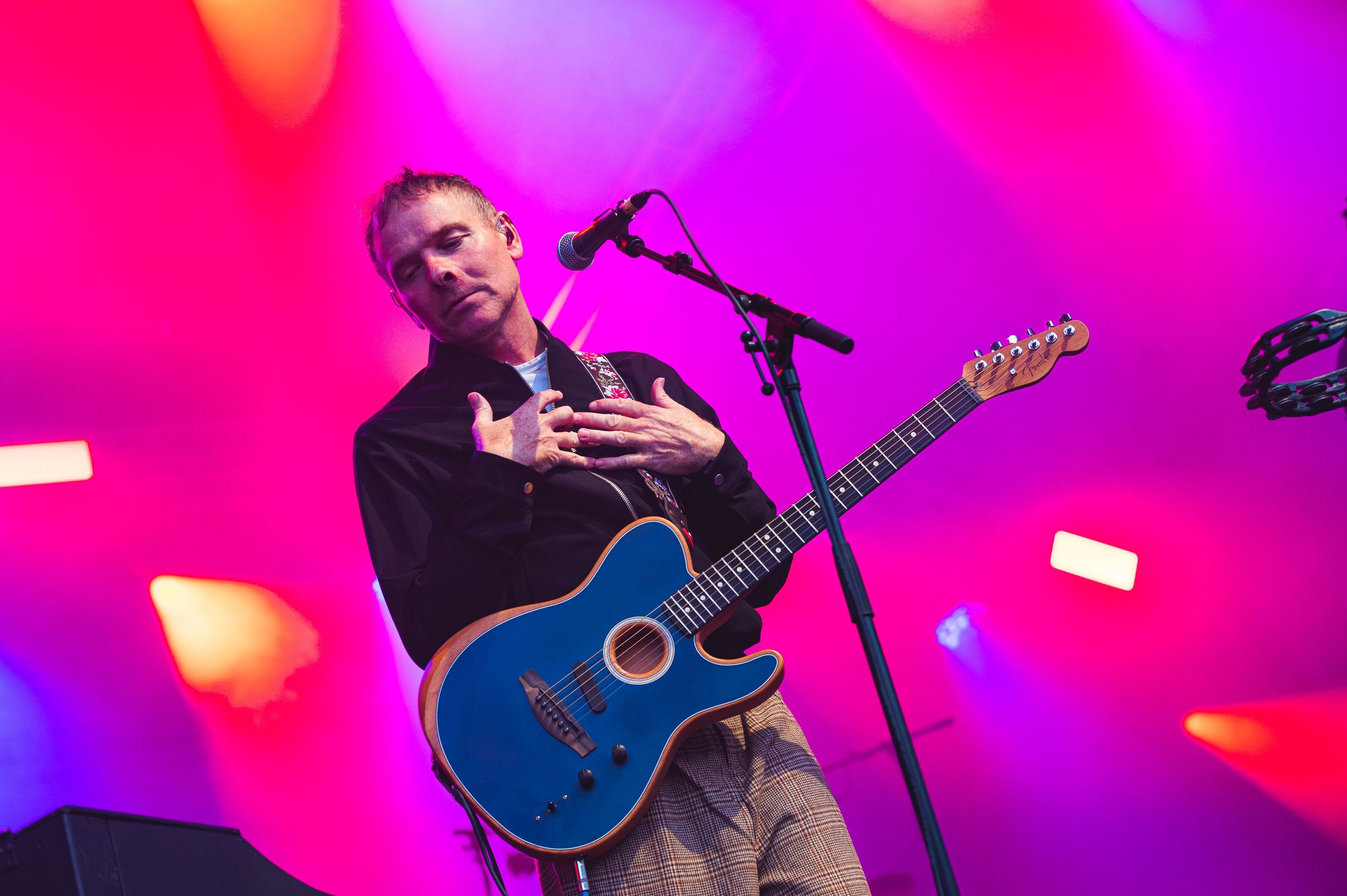 Even one with a more than superficial understanding of Belle & Sebastian’s career may be surprised as to both Murdoch’s animated and effusive nature, and the vitality of their live sound. The overused description of the band as “twee” can perhaps lead to falsely assumed notions of softness, feyness or fragility. However, the combination of the band’s hefty roster (seven mainstays and one or two extra musicians), formidable melodies that expand rather than shrink in the live forum, and Murdoch’s voluable stage presence result in something rather robust. The latter is highlighted when Murdoch responds “Oh, I wouldn’t have been acting like a tit the whole time” when Jackson informs that both his parents are in the audience.

‘Piazza, New York Catcher’ is apparently Murdoch’s “not sentimental or smutty” account of meeting his wife; the lyrically astute and tuneful standout is effectively propelled by jangly electric guitar picking rather than the strummed recorded version. The deft melody of ‘Chickfactor’, sang by Jackson, is partially picked out by tasteful trumpet interludes and sees some double maraca action as Murdoch occuppies his empty hands.

“Have we played anything from the red album yet?” ponders Murdoch in reference to 1996 magnum opus If You’re Feeling Sinister. Thus, ‘Get Me Away from Here, I’m Dying’ features a duo of pianicas and Murdoch steps away from the mic to allow the B&S die hards at the front sing the “I’m dying” refrain. The opening keyboard riff to ‘The Boy With The Arab Strap’ could be the crowd’s most excited reaction of the night and a twin recorder solo jauntily captures what is evidently one of the group’s most enduring melodies.

When, at circa 10.05pm, Murdoch declares that ‘Sleep Around The Clock’ is the night’s final song, someone in the audience is heard saying “but the curfew isn’t until 10.30pm.” One wonders how this person has escaped the notion of an encore all the way into adulthood. Indeed, Belle & Sebastian return for a three song encore, taking us up to the curfew with a hearty singalong performance of ‘Judy and the Dream of Horses.’ The only other thing to note is that mustachioed bass player Dave McGowan looks a lot like Bill Burr in ‘The King of Staten Island.’ The wait has been proved utterly worth it.