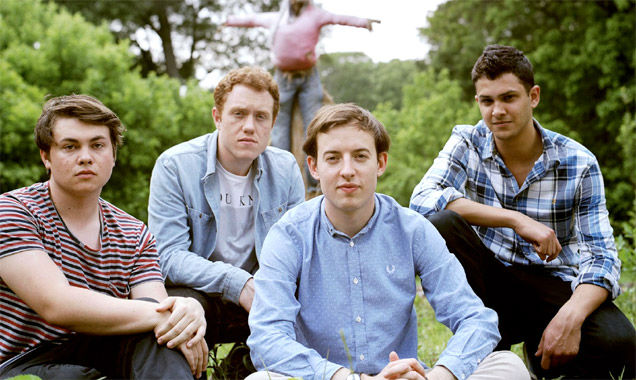 Bombay Bicycle Club’s announcement of their new tour came as welcome news for their loyal following of fans, and one of Bristol’s busiest music venues, O2 Academy, managed to snag the band on Wednesday 12th March. The group from London, consisting of Jack Steadman (lead vocals, guitar, piano), Jamie MacColl (guitar), Suren de Saram (drums) and Ed Nash (bass) got their first taste of fame in the Road to V competition on Channel 4 in 2006, for which they won the opening slot at the V Festival that year, and have since gone from strength to strength. With the first track off their new album ‘So Long, See You Tomorrow’ (which hit the number 1 album spot in February) seeming an appropriate place to start, the funky tones of “Overdone” was met with cheers all round. Fantastic graphics, which were to continue throughout, featured animated versions of the artwork from the new album. Not ones to mess around, the band continued straight on to their next track, “Alright Now” with the sax and trumpets joining them on stage particularly prominent in the last chorus. With four albums under their belt, there was sure to be an eclectic mix of tracks provided for our pleasure, with favourites such as the bouncy “Shuffle”, the rocky “Your Eyes” and their first single “Evening/Morning” all slotted in nicely between the songs of their latest album, no doubt bringing back nostalgic memories for the audience. Liz Lawrence, who provides female vocals on the latest album, was present with the band all night, along with tambourine, and provided a beautiful and faultless accompaniement for “Home By Now.” Some humour shone through for the largely quiet group, who are obviously so in to performing they don’t waste too much time on chit chat (at a music event, shocking I know), when they introduced a track as a tribute to Shakira met with some confusion before launching into “Wherever, Whenever” off the new album, which, I’d like to add, unsurprisingly sounds nothing like Shakira’s song, but opens with an alluring and haunting vocal before kicking in to a catchy rhythm impossible to stand still to. Of course, one of the band’s latest singles, “Luna,” was met with a great reaction from the audience, with female vocals provided from support act Rae Morris. Followed by “Always Like This” from ‘I Had the Blues but I Shook Them Loose’ with its fantastic ska-like vibe the band rolled out “So Long, See You Tomorrow” which started with a chilled and soft four minutes before building up to a beaty end that left the crowd buzzing. The floor was shaking as the audience stamped their feet to encourage the band back on stage for their encore which started with “What If” from ‘I Had The Blues But I Shook Them Loose,’ followed by the hugely popular “Carry Me.” And with that, Bombay Bicycle Club said their farewells and a very sweaty audience diespersed (sweaty from all the dancing… I’d like to note that there are no problems with the O2 Academy air-con.) Review by Carly Dutton Find out more about the band by visiting their official website and for news of upcoming events at O2 Academy Bristol visit www.o2academybristol.co.uk
Follow @Thefixmag
Recent Posts
We Like You…