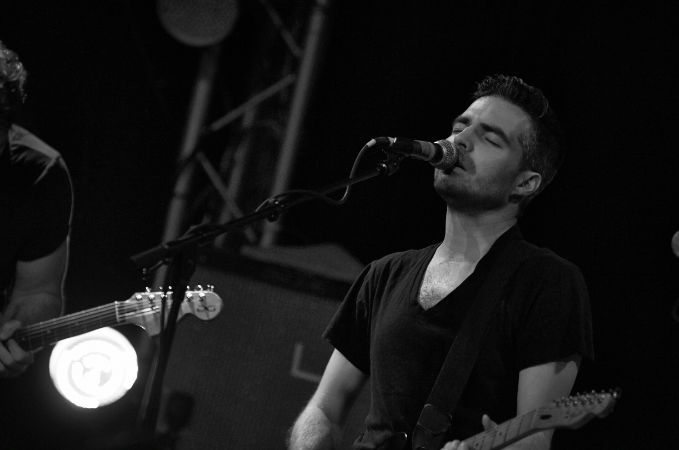 Photo by www.willfahy.co.uk – to view more photos from this gig click here.

The road that has led The Boxer Rebellion to this damp Thursday night aboard Bristol’s famous Thekla music venue has certainly been a tumultuous one. An oscillating path of wonder and woe has seen the band signed by Alan McGee’s Poptones label only for it to collapse shortly after the release of debut album ‘Exits’, the cancellation of a prestigious slot supporting The Killers after singer Nathan Nicholson’s burst appendix and, after 5 hours of life saving surgery and months of band inactivity, a return to form that saw 2009’s critically acclaimed second album become the first ever digital only release to break into the Billboard album chart.

Uniformly clad in jeans, T-shirts and Cuban heel boots, the London-based 4 piece eschew any introductions and fire straight into ‘The Runner’ with its jauntily descendent guitar figure and an impassioned Nicholson singing about “Honesty on a string.”  After the crunchy rhythm and circling riff of ‘Semi,’ Nicholson engages with the crowd for the first time as he laments the torrential rain outside while affirming the advantageous position that being on a boat has in such conditions.

The audience, a much mixed entity spanning between teen and middle age, are duly respectful during the opening numbers but seem to increase in enthusiasm as the night progresses. ‘Take Me Back’ is the first chorus to really stand out while Nicholson’s solo venture out front to perform the subdued ‘New York’ is warmly received; the song features guitarist Todd Howe and bassist Adam Harrison both docking their instruments and forming a three way percussion with drummer Piers Hewitt with an extra drum kit and electronic drums pads respectively.

“Anyone see us here before?” asks Nicholson mid-set before his adjoining, “You must’ve all brought some friends this time,” hints at a much less populated affair when The Boxer Rebellion last played the Thekla. Some conspicuously impressive bass playing from Harrison then forms the backbone for the jaunty stompings and reverbed guitar embellishments of the excellently catchy ‘Spitting Fire’.

The stuttering drum intro to ‘Diamonds’ is instantly met with recognition from the crowd and, when the lyrics drop out near the song’s close, Howe provides some echoing guitar shrieks that are typical of his technique throughout; facilitated by a vast pedal-board, he uses delay and reverb while utilising rapid one and two string alternate pickings to form a palate of effects integral to the band’s sound.

A deliberate drum beat heralds in ‘No Harm’ which features some impressive falsetto vocals from Nicholson and, as he sings the ‘There’s no harm’ chorus refrain, one can hear a slight resemblance to Radiohead’s Thom Yorke. His adroit singing is further highlighted as he delivers a captivating, isolated vocal with the rest of the band dropping out at the end of the beautiful ‘You Belong To Me.’

Requested by several hecklers during the evening, the band finally gives the audience what it wants as they launch into first single ‘Watermelon’. Nicholson furthermore treats the audience as he sets his microphone loose and, to a volley of snapshots and smiles, he sings the track’s final choruses while ensconced within the folks in the first couple of rows.

Returning for an encore, the band perform ‘Always’ and ‘Locked’ before Nicholson’s “Thank you – we hope it’s not so long next time,” gives way to the evening’s final opus of ‘The Gospel of Goro Adachi.’ A long instrumental freak-out of pedal-board experimentation, dual guitar shredding and more 3 way percussion follows and, to the cacophonous feedback of Howe’s dispensed guitar, The Boxer Rebellion leave the stage for good.

While undoubtedly a musically tight force featuring an impressive vocalist, The Boxer Rebellion are perhaps a couple of quality tunes short of being a band more demanding of record label attention and widespread appeal. However, an enjoyable live show of 17 tracks has featured some great musical moments and, judging from the rapturous reactions from a considerable number of the capacity crowd, they have found their way into people’s affections. Certainly, if even more friends were to be brought here to a Boxer Rebellion gig next time round, the good ship Thekla will be in danger of capsizing.

Find out more at theboxerrebellion.com