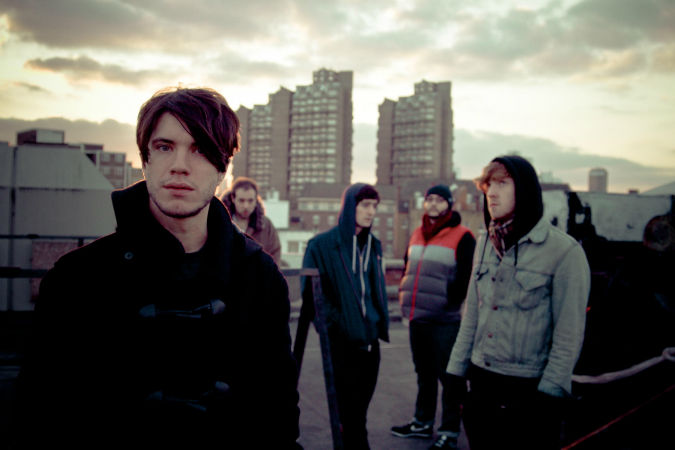 Review by Georgina E Robbins –
In the latter parts of 2009, a brainwave of creativity and experimentation was waiting to erupt from what is known at ‘BretonLabs’. A year later, ‘Other people’s Problems’ was released and for many this prompted the question, “How can you categorise these guys?” It’s not just music, but a merge of film and visual affects supported by a back drop of audio affects.
Fast forward four years – after many studio sessions in Berlin and we have the band’s latest work, ‘War Room Stories.’ Inspired by the surroundings and local culture, their new material sampled various outside sound effects, and yes, that includes insects. But what does this mean for a Bristol audience who have arrived for this latest Breton experience?
The Louisiana is packed out on the night and after support act The Crisis Project left behind a sense of euphoria, the crowd are relaxed. The trademark butterfly appears on the backdrop and cue Breton, a group of unassuming guys, who take to the stage and this journey begins. An explosive rendition of album opener “Envy” and the upbeat dance like tracks “Legs and Arms” particularly blows the audience away.http://www.youtube.com/watch?v=1JWOKGK9pis
Accompanied by a visual show, acting as the storyboard, Breton display a wealth of talent and skill that culminated in to sounds that one audience member described as “music that makes you want to walk along the beach with a pina colada and have an epiphany.” They weren’t aggressive or in danger of torturing the atmosphere, which adds to the easy listening nature of the performance.
Standing by the speaker I can feel the bass rip through me; I feel as if I was being transported away from my every day life and that is what I love about it, a form of escapism. With a similar style to that of James Blake’s, the mix of soul, fast paced beats and harmonising vocals, meant standing still was not an option. Lead singer and songwriter Roman Rappak allowed the electricity of the entire set, which never faltered and kept everyone of us engaged. Their electro enthused array of unique sounds, energetic displays and a little bit of a instrument reshuffle here and there provided an unforgettable show that leaves you feeling hypnotised.
Crowd Favourite – “Pacemaker”
Highlight – Visual Displays
Lasting thoughts – Full of energy and engaging. A visual and musical performance that takes you on a journey and allows you to get lost in your surroundings.Find out more about the band at www.bretonlabs.com
Follow @Thefixmag
Recent Posts
We Like You…