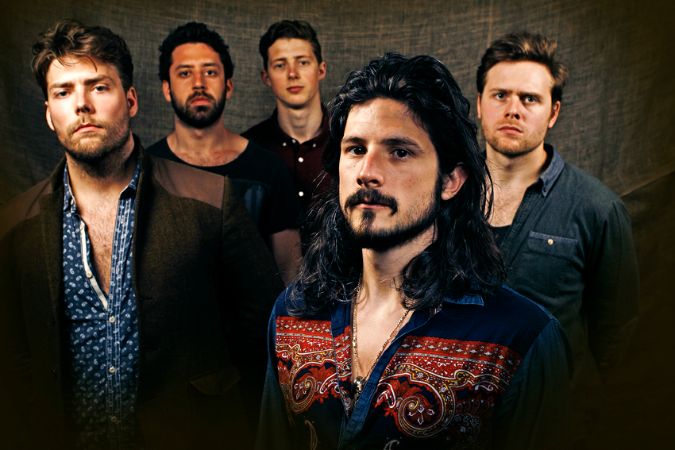 London-based 5 piece Brother & Bones, with the diligence of a somewhat indefatigable touring schedule, have made a commendable ascent that reached its zenith with a headline show at Kings Cross’ Scala less than a month ago. After a mammoth 33 date UK tour at the tail end of 2013, the quintet have been back on the road again, this time via European dates in cities including Paris, Berlin and Brussels and ending up here in Bristol for this, the final date of a 20 show run.

Using the word ‘mixed’ to describe the crowd at any gig is a fairly opaque adjective that is perhaps utilised as convenient shorthand but tonight I can confidently assert that this is the most diverse crowd I have seen at a gig for some time; there’s ostensibly as many women as men, a number of them callow enough to require the display of I.D upon entrance to The Exchange while scattered around are those not long to be the recipient of a free bus pass.  Being the evening following an England vs Wales Six Nations match, there is also a tinge of alcohol soaked pre-show anticipation particularly embodied by a gentleman next to me who, with cries of “Your Revolution” is inebriated enough to be barking song requests before the band have even set up their instruments.

Without introduction, the show starts with the fingerpicked, falsetto vocal beginnings of “Raining Stone;” a gentle palette which the band flesh out with some atmospheric electric guitar and twin drum beats by the group’s dual percussionists. With the high register reverbed guitar on “Long Way To Go” and the harmonic sustains on the immediate “Follow Me Down,” it is clear that guitarist James Willard is the bonefide star of Brother & Bones. His busy guitar work, including regular use of wah-wah, high octave screechings, reverbed delay and lightning blues licks, is the fulcrum upon which singer/songwriter Richard Thomas’ bluesy, folk-rock tunes can be fully realised.

A brief mention of “Sunday sambucas” by Thomas adds to the atmosphere of drunken ebullience before the well-received “For All We Know” induces the first crowd sing-along. It is an anthemic folk rock opus during which one can understand the ubiquitous Mumford & Sons comparisons; of course, these stem largely from Thomas’ vocal similarities to Marcus Mumford although, as undoubtedly strong as it is, Thomas has a vocal so impassioned as to become occasionally cloying in its overwrought nature.

Where Brother & Bones excel though is in their versatility; their excellent musicianship allows them to vacillate between blues, folk, tinges of alt-country and energetic moments that almost threaten to turn into classic Led Zeppelin style rock. The band also features the somewhat rare concept of two percussionists; Yiannis Sachinis manning the drum kit with Robin Howell-Sprent augmenting with drum pads, bass drum and cymbals. While at times this set up feels a little superfluous, Howell-Sprent occasionally provides neat textures to effectively add to the atmosphere of the songs.

“A Man In Need” features Willard’s best guitar work of the night; his descending guitar lines, wah-wah pedal freak-out and blistering solo are all deserving of the audience applause following Thomas’ appreciative shout out at the song’s close. Thomas keeps his addressing of the crowd to a minimum but, before showcasing two new songs, he talks of the band recently writing more tunes to finally facilitate the arrival of a full album. The new songs are well received, the second of which activates the audience into a spirited clap-along.

“If I Belong” containing the pleading lyric of “Help me up if I belong” is moment of tender vulnerability and the song’s sentiment is embodied by the discernibly drunk teenage girls who hug each other near the front of the stage; with this three-way embrace, the song becomes a touching ode to friendship. Our premature song requesting extraordinaire then gets his wish as the band end the set with “Your Revolution.”

Brother & Bones, while undoubtedly fine musicians, perhaps fall into a sort of limbo in regards to their ability to continue to keep their audiences growing; they don’t rock quite hard enough to attract a certain type of crowd, while their melodies are not quite lovely or enduring enough to attract another. However, if they were not to move too far beyond audiences of this size, the folks at The Exchange, ranging from the very receptive to the adoring, will be more than happy to keep them for themselves.

To find out more: http://www.brotherandbones.com/