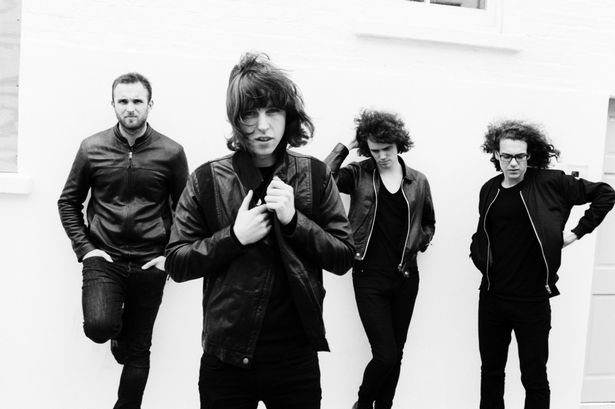 For the third time in 14 months The Fix had the name Catfish and the Bottlemen on its list of monthly gig reviews in Bristol and thus our previous experience of their performances at Louisiana in October 2013 and February of this year provided a somewhat heart warming contrast to events that unfolded on this brisk December evening. For me, the man with the task of casting an analytical eye over proceedings, it’s very much a case of comparing the performance of this band both pre and post debut album The Balcony and it feels surreal – people know every word to every song, as I once predicted they would, and for a generation of late teens and early twenty-somethings ‘Kathleen’, ‘Cocoon’, ‘Fallout’, ‘Pacifier’ et al will sit amongst future festival anthems that they’ll reminisce about in years to come.

The crowd is predominantly made up of the aforementioned and as I stood on the balcony above the stage I regularly looked down to see them crammed in to witness their new found heroes, who I suspect many were seeing for the first time. For me I suspected their experience was similar to mine when watching The Kooks or Razorlight when I was in my early twenties. The band and a large portion of the audience are now fortunate to be in that time of their lives and the songs reflect that. From a lyrical point of view it’s very much a case of a man in early post adolescence analysing the complex relationships, or perhaps relationship, with the opposite sex and relaying his thoughts, revelations and frustrations (she gives him problems) to us and we can relate. The music is honest, upbeat and carefree as the songs provide an escape for that classic mixture of feelings. Of course there’s a lot of heart too and all of that comes through in the band’s performance.

Bouncing on stage at 8.45pm, ‘Rango’ kicks the performance off and sends the audience, who were singing choruses from The Balcony as they waited, into a frenzy. Every track from the album follows and the quality of performance is admirable, but what does worry me is just how quiet the usually charismatic Van McCann is between songs. Our previous reviews (Oct’ 13 & Feb’ 14) will tell you that Mr McCann almost offers a stand up comedy sideshow to these early performances, which no doubt went a long way to having audiences warm to them. But it seems to be song after song with the odd brief, “Thanks,” “It’s good to be here” or “We’ve always wanted to play this venue,” that could easily become habitual when playing night after night across the country. It’s a shame but it’s understandable – this band are on their 3rd leg of UK tours in an 18 month period and they’ve toured North America in the middle. However, then another debate arises – when a band hits it this big and no doubt external influencers stick a relentless touring schedule in front of them, does the personality drain out as the mental fatigue kicks in? Of course, that’s not to say that the band didn’t have energy in the performance, there’s bundles on stage and most importantly their music feels tighter and more polished than ever, but I couldn’t help but feel that this new audience were missing out on the wonderful personality that shone through in earlier performances. I remember seeing Travis’s first gig in years in Bristol in 2013, one of my all time favourites, and Fran Healy’s interaction with the audience was a large part of that because it felt that it was a unique experience that couldn’t be repeated. It felt the same when seeing Catfish and the Bottlemen in February though I would speculate that when ‘Why Does It Always Rain On Me?’ propelled Travis into the limelight, the relentless touring they faced may have dulled down Healy’s persona. Am I the only one who thinks that’s a shame?

Overall there was much to admire about the performance and as I pour out my worries about mental fatigue the same can’t be said for the clear passion that comes from the stage performance and the quality of McCann’s voice. The latter could easily be lost in amongst the noisy thrashing of good old fashioned guitar based indie, but it rises above throughout and in the slower stripped back parts of tracks that cue mass sing-alongs the high vocal standard is underlined. Acoustic track ‘Hourglass’, the slow number of the night, particularly emphasised this and for many would be a highlight as was the performance of ‘Homesick’. For me, the gig hit its top level with the pulsating ’26’, the new age of a spectator who received a birthday dedication from McCann off the back of some audience interaction, and penultimate song on the night ‘Cocoon’, which has a ‘finger up to the masses feel about it’. Both were impeccably performed as was ‘Tyrants’, a song worthy of rounding off any night of youthful exuberant indie antics.

This year Catfish and the Bottlemen have thoroughly impressed us at The Fix, so much that we even bought tickets for this one just in case we couldn’t get there to review. It’s been fascinating to see them progress from playing to thirty to hundreds and enjoying the recognition that their hard work deserves. If you’ve never seen them, you should, and many of the audience on the night will talk about the gig for years to come as one of their highlights. For us, we have fond memories of February that eclipse this particular gig at Thekla, but make no mistake, these boys played a belter and they will for years to come. Let’s just hope in 10 years time we’re not saying, “their first album was amazing but then it went downhill,” like us hitting thirty now say about The Kooks and Razorlight.