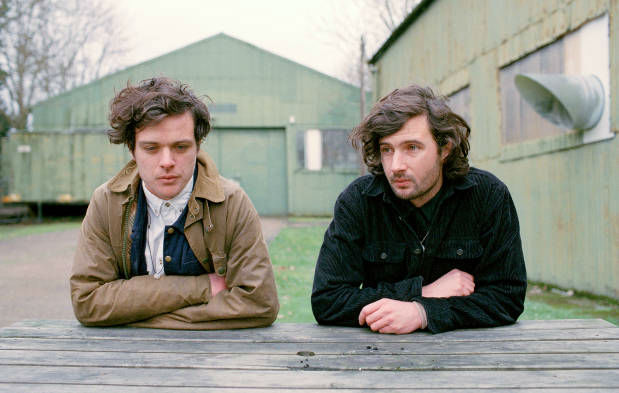 Review by Kevin McGough – Introverted and unassuming brothers Michael and David Champion, who comprise Isle of Wight band Champs, are as far from the boxing stereotype their moniker brings to mind. Theirs is rather a more desolate and brooding take on the world which is more in tune with their roots in their ghostly hometown – Victorian seaside resort Ventnor. Here ahead of the release of their debut album “Down Like Gold,” they enter the arena not with a bombastic light show or to raucous rap music, but instead creep on backed by eerie space echoes reminiscent of “2001 A Space Odyssey”. “Down Like Gold’”clearly runs deep with songs about lost love and the timeless protagonist of such melancholy – girls. “My Spirit Is Broken” was written, they insist, for Rachel Stevens, formerly of S Club 7 and “Pretty Much (Since Last November)”  is about bumping into an ex months after you’ve split up and they’re fine but you’re still a crumpled mess. “My Spirit Is Broken” seems brisker – just call it uptempo misery. It’s a bit Empire of the Sun: folk-ish with a production shimmer to connote a sense of wonder as a hazy layer to mask the sorrow. It comes with a video that follows the brothers as they run through the town performing the popular local past-time of ‘pool jumping’ – jumping in people’s swimming pools. It reminds us of Burt Lancaster’s The Swimmer, with a similar sense of pleasure as a cover for the truth. “Savannah” is a figurative song about being engulfed. ‘I’ve never ever seen waves like yours before,’ they sing. As a live entity they have added a pianist, bassist and drummer to the mix to fill out their sound but often it is left to lead singer Michael to hold the fort, which he does with aplomb as he and David create haunting choral vocals entwined over a vast range that does impress. They close on standout track and first single from the album “Savannah” which sees the piano finally spark into life as it knocks out the catchy riff that defines the song. “Down Like Gold” comes on 10 March 2014 through all normal channels. Check them out here: www.facebook.com/champschampschamps
Follow @Thefixmag
Recent Posts
We Like You…