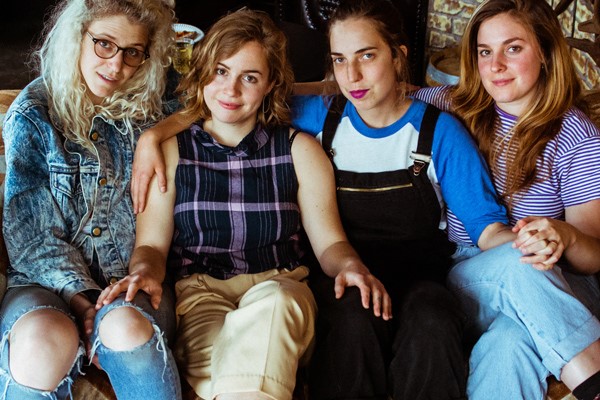 Formed in the satisfyingly alliterative origins of Walla Walla, Washington, four-piece indie rock act Chastity Belt arrive aboard Thekla – now sporting a new steel offset hull after its recent £1 million revamp – in support of last month’s self-titled album. Now four albums in after wryly titled 2013 debut No Regerts, it was the band’s touring slots alongside Courtney Barnett – and the indie-famous rocker’s effusive championing of them – that brings this reviewer to their opening UK date in a 19 date European tour.

Taking stage, there’s a lampooning of the band’s US origins (some thickly exaggerated “How y’aaaalll doing?”) and a nod to the nautical surroundings (“Ahoy!”) before opener ‘It Takes Time’. It’s a track that can serve as a fair representation of the new material, it being a floaty, slightly mournful gauze of indie pop. Frontwoman Julia Shapiro – her nerdy, oversized specs and lengthy 80s rock perm giving a slight epicene visage – gets a lot of mileage from her two chords and adapts her posture to adjust for a microphone coming loose from its stand.

Representing roughly half of the evening’s set, the new songs are possessed of a uniformly tranquil vibe – somewhere between Beach House and La Sera – whereby the songs somewhat lack an individual character. This sense of sameness definitely isn’t aided by the fact that Shapiro’s lyrics often lie indistinct amidst the not unpleasant haze of guitars, bass and drums. The crunchy, more pointed ‘This Time of Night’, from 2017 album I Used to Spend So Much Time Alone, is not the first example of older material being rendered more salient within the set list. The same could be said of ‘Stuck’, which sees drummer Gretchen Grimm temporarily become frontwoman in a role swap with Shapiro; it features a nicely oscillating guitar riff and the first hummable chorus.

Of course, as there’s a natural tendency to take a while to seep into one’s affections, one generally shouldn’t be too dismissive of new songs. To give them their due, ‘Ann’s Jam’, guided by a simple but lovely instrumental passage, conjures a poignant evoking of happier times (“It was clear then, the sea before a storm/Now there’s a thick fog around everything I learn”). Meanwhile, ‘Split’ is facilitated by more role swapping as Jenny Lewis-alike guitarist Lydia Lund takes up lead vocal duties with Shapiro offering glistening arpeggios before disappearing from view as she kneels beside her pedal board and drapes the song’s latter stages in theremin-esque atmospherics.

Now long-time bandmates, the four ladies who make up Chastity Belt emanate a sense of fun and close friendship in their obvious enjoyment of playing live. Their tightness of unit is manifest in myriad examples of eye contact, smiles and reciprocated laughter, and whispered conversation between songs. Early in the set they spread the affection and blow a kiss to support act Gang (which incites a bizarre solitary heckle of the band’s hometown of “Margate!”) and, apparently prompted by some talking near the front, Grimm and Lund respond with playful exchanges of reprimand in strained comedy voices.

Another older song ‘Different Now’, which captures the unbridled joy of a simple but catchy guitar riff, is perhaps the evening’s standout track and is the best received of the evening. An enjoyable two song encore features the semi-celebratory ‘Seattle Party’ and the fetching surf-rock riffs of ‘Joke’. As we depart the overhauled Thekla, the narrative that Chastity Belt’s previous albums translate better on the live stage has been confirmed.