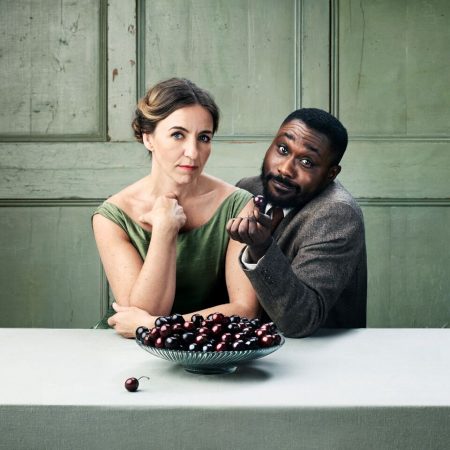 With upheaval, impermanence and the inevitability of transition being among its central themes, Rory Mullarkey’s dynamically executed interpretation of Anton Chekhov’s theatrical swansong The Cherry Orchard feels a rather apposite opener to the Old Vic’s Year of Change project. Set in Russia circa 1900 – some four decades following the emancipation of the serfs – Chekhov’s play captures a country in the grip of societal upheaval and strikes a keen balance between the farcical and the tragic.

A levelling of the social playing field of the times – an ascendant middle-class catching up on a declining aristocracy – is captured in the relationship between the play’s two lead characters: Landowner-fallen-on-hard-times Madame Ranyevskaya (Kirsty Bushell) and Lopakhin (Jude Owusu), from serf stock but now a successful, self-made businessman. After escaping personal tragedy to live in Paris, Ranyevskaya returns home for the first time in five years but is soon reminded by Lopakhin that, in order to pay off huge debts incurred by the family’s decadence, her estate – including her beloved cherry orchard – is due to go to auction.

What sounds like a fairly prosaic and uninvolving central plot is beautifully fleshed out with poignant humanity as we see the value of the cherry orchard through the wistful recollections of Ranyevskaya’s past. The more we learn about her life – full of loss, betrayal and thoughts of suicide – the more the emotional depth of the character is revealed. Thus, we can really feel the tug of indecision when it’s proposed by Lopakhin that, in order to save the estate, the cherry orchard can be sold off to make room for holiday cottages. 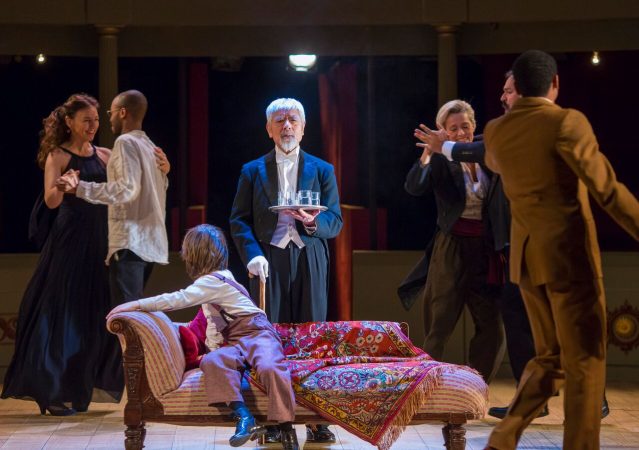 However, the poignancy of the family’s dilemma in facing the loss of their home is leavened by touches of comedy and occasional absurdity. The family’s estate clerk Yepikhodov gets some early laughs with his propensity for squeaky shoes and clattering into furniture; Ranyevskaya’s brother Gayev, a chattering eccentric prone to incongruous mentions of billiards, amusingly delivers a speech about a bookcase which is apparently a paragon of “virtue and social consciousness.” Also, the character Charlotta embarks on some ventriloquism towards a red-faced member of the audience.

It’s an energetic production realised by the strength of its performances. Bushell and Owusu are both excellent in their central roles, Simon Coates is great value as Gayev, the comic heartbeat of the play, and Julius D’Silva nicely executes the near narcoleptic, larger-than-life landowner Pischik. However, there isn’t a single weak performance among the entire cast and one is hard pressed to catch the slightest trace of a stumbled line.

The play’s allegories of social upheaval, identity, impermanence and loss become clear within the unfolding narrative but it is in the florid speeches of idealistic, “perpetual student” Tofimov (effectively given a restless urchin-like quality by Enyi Okoronkwo) that further themes emerge. His dialogue occasionally evokes early Bolshevik ideas and, in bemoaning the trivia that distracts people from a real sense of what’s going on in the world, he hits upon a timeless, and unfortunate, theme.

An incisive and faithful adaption, buoyed by all round powerful performances and near flawless casting.