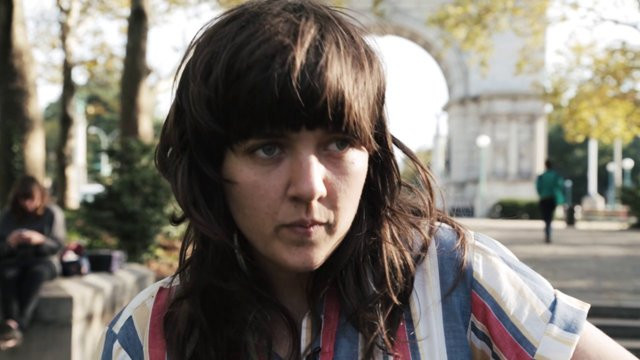 Judging by the fruitless appeals for spare tickets both on the internet and outside the venue before tonight’s sell out show, Melbourne singer-songwriter Courtney Barnett perhaps could’ve packed out a venue twice the size of The Fleece. Just five days after the release of Sometimes I Sit and Think, and Sometimes I Just Sit, her first album proper and the subject of resounding universal approval from critics, Barnett brought along her lyrically dense folk/indie/grunge fusion to Bristol under a prevailing sense that her sparkling talents will soon be rendered uncontainable within the intimacy of such venues as the 450 capacity Fleece.

The evening, however, fails to begin smoothly as Barnett is required to go solo in performing an impromptu version of ‘Depreston’ while a technician attends to problems with the bass guitar set up. A sweet folk ditty about viewing a new house in the suburbs, it provides early evidence of Barnett’s eye for detail and her lyrical stream-of-consciousness: “Then I see a handrail in the shower/A collection of those canisters for coffee, tea and flour”. Despite a couple of intermittent crackles and pops emerging from the problematic bass amp, it is a charmingly gentle set opener.

The boisterous two chord clamour of intended opener ‘Nobody Really Cares If You Don’t Go to the Party’ is evidence that complications with the bass are well and truly fixed as Barnett contemplates the perennial post mid-twenties conflict between getting sloshed and being sensible: “I wanna go out but I wanna stay home.”

Much has been made in the musical press of Barnett’s admiration for Nirvana and, rather than existing as an easy reference point for lazy journalism, there is ample evidence here of its validity; songs such as ‘Lance Jr’ employ a repeated four chord/two bar pattern often utilised by Kurt Cobain while the two chord strum of the verses to ‘History Eraser’ are reminiscent of ‘About a Girl’. Occasionally her stage manner is redolent of Cobain; with her face lost beyond the follicles of her shaggy mane, a swaying Barnett swings her lead guitar during the enduring instrumental jam of ‘Are You Looking After Yourself’. Furthermore, she even introduces ‘Lance Jr’ with “This is from our first EP, most people don’t own it”; a near verbatim echo of Cobain at the beginning of Nirvana’s Unplugged album.

With a voice somewhat akin to Sheryl Crow, albeit with an injection of slacker quirkiness, Barnett’s appealing authenticity is manifested in her disregard for assuaging her nasal Aussie drawl; her rhyming of “know” and Triple O” during ‘Avant Gardener’ sounds more Australian than a shrimp barbecue party on Ramsay Street. The excellent ‘Dead Fox’ best encapsulates Barnett’s vacillating vocal stylings: the half-singing, half-speaking ramble of her verbose narratives giving way to a melodic delivery of the chorus. Featuring a chord progression borrowed from ‘Boys Don’t Cry’ and a striking lyric describing roadkill as a “possum Jackson Pollock painted on the tar”, the song reveals Barnett’s healthy ear for a chorus and is a set highlight.

Apparent tonight are the two main aspects of Barnett as a musical performer: her garrulous delivery of minutiae laden tales evidenced in ‘History Eraser’ compared to the loud grungy rock-outs of tracks such as ‘Pedestrian at Best’. Barnett’s growing appeal is no doubt the result of a focused interest in her lyrics; wry and humorous, they combine the storytelling trivia of Alex Turner, the meandering verbosity of Jeffrey Lewis and an Alan Bennett-esque marriage of the profound and the prosaic; all things that don’t quite fully translate when heard live.

As for Barnett’s in-between song badinage, she for the most part lets the music do the talking but does engage with a few short exchanges; she decries an entire gender (“Fuckin’ men”) when a demand for ‘Avant Gardner’ is misheard as a loutish demand to “Have a beer!” and the emphatic cheer that follows her promise that anyone who purchases merchandise will receive a free kiss from bass player ‘Bones’ induces an incredulous “There’s a fuckin’ lot of interest there.”

After a rocking encore of The Divinyls’ ‘I’ll Make You Happy’, Barnett and her two bandmates depart from the stage for good. As the audience flee into Saturday night, I’m willing to bet that all concerned were glad they went out and didn’t stay home. It’s a stage to which the ascendant antipodean will surely never return.