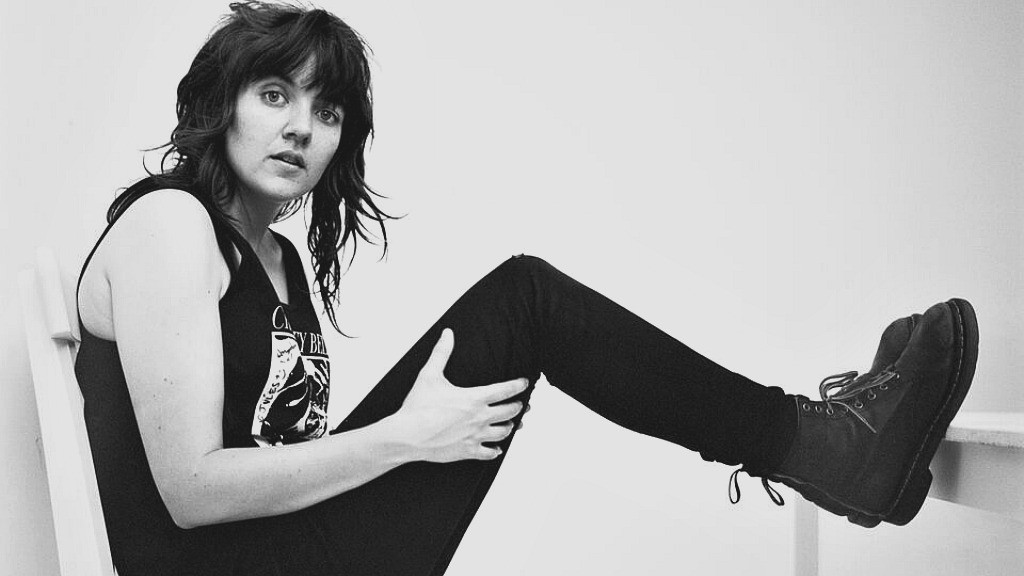 Of all the acts to have emerged into the alternative/indie rock universe in the past decade, Melbourne based singer-songwriter Courtney Barnett makes a solid claim to being the most brilliant and unique. Barnett’s breakthrough 2015 debut Sometimes I Sit And Think, and Sometimes I Just Sit was a masterwork that perfectly combined the elements that make her such a rare gem: Dynamic songwriting, distinctive guitar playing and a meandering, quasi stream-of-conscious lyrical style – all delivered in her half-sung, half-spoken Aussie drawl.

Seven years later, the number of Courtney-alikes in Cardiff testifies to her permeating at least a small part of rock culture; there are a few imitation mullets – akin to Paul McCartney in his mid-70s Wings period – and one fellow in ankle biter trousers, Doctor Martens, black denim Jacket and himself topped with a mulletted homage, is an uncanny male copy of the Australian star. News of tonight’s status as a sold out show was delivered around 24 hours prior; Barnett will perform in front of a 1,000 capacity Tramshed audience.

The opening one-two punch of ‘Rae Street’ and ‘Sunfair Showdown’ highlights the pared back ethos employed due to pandemic-era necessity in Barnett’s most recent 2021 album Things Take Time, Take Time. Both largely hang on a simple three chord structure but Barnett’s ear for a melody and a compelling lyric remains intact. 2013 favourite ‘Avant Gardener’ makes a surprisingly early appearance and the ingeniously digressive tale of Barnett’s suffering a severe asthma attack paradoxically sounds riveting when the crowd sing along to the “I’m not that good at breathing in” refrain near the song’s close.

Barnett then acknowledges the audience and appears impressed with the mass sing along; “It’s nice to be here. I heard you singing…don’t ever stop.” While ‘Avant Gardener’ is the adrenaline shot to the heart that truly kicks this show into life, ‘Small Poppies’ is perhaps an unlikely early set highlight; it is delightfully moody, propelled by Bones Sloanes’ ponderous basslines as Barnett stalks about the stage and shreds her guitar from beneath a shaggy mane of hair.

Such is the love for Barnett in the audience – there are shouts of ‘Go on Courtney!” and Barnett laughs once or twice at the benevolent heckles in her direction – that she occasionally appears embarrassed or overwhelmed by the adulation. And all this is before the rapturously received ‘Depreston’, arguably Barnett’s most accomplished moment as a songwriter. The audience sing heartily along to the lyric “If you’ve got a spare half a million, you could knock it down and start rebuilding”. Thus, Barnett’s haunting ode to mortality – though many might be under the impression that it’s a mere account of a house-hunting trip to the suburbs – is, again, imbued with a paradoxical joy, a group sense of defying the inevitable.

Aside from the great tunes and the enjoyable spectacle of her guitar playing, a key aspect of Barnett’s ability as a live performer is the accurate replication of her on-record vocals while in the live format. Her languid, deadpan delivery – that singing/spoken hybrid in an Aussie accent – is perhaps easier to repeat live when compared to a more conventional reliance on powerful vocal pipes. This is perhaps best exemplified when she vocalises over the gliding guitar melodies of ‘Walking on Eggshells.’

In the lead up to the encore, there’s a powerful trio of well-loved tunes; both ‘History Eraser’ and ‘Pedestrian At Best’ – redolent of ‘About A Girl’ and ‘Smells Like Teen Spirit’ respectively – display Barnett’s oft reported Nirvana influence; ‘Nameless Faceless’, while a somewhat petty, whole song attack on an online troll, is melodically strong enough to justify it (I’m still disappointed that the inspired lyric “I could eat a bowl of alphabet soup and spit out better words than you” were the troll’s words, not Barnett’s).

More love is hurled stagewards and there’s a lovely, life-affirming moment when Barnett declares “I love you too. I don’t know what to say, I sometimes just feel so happy and lucky I get to do this.” This is immediately followed by someone bellowing “Courtney, you’re so fuckin’ good!” but the beauty of the moment remains.

The night’s only fault is with the disappointing choice to return for the encore with two average album tracks from Things Take Time, Take Time. But with a performance like this, it’s a small anti-climax that barely registers. It’s an outstanding show by Barnett and her band.