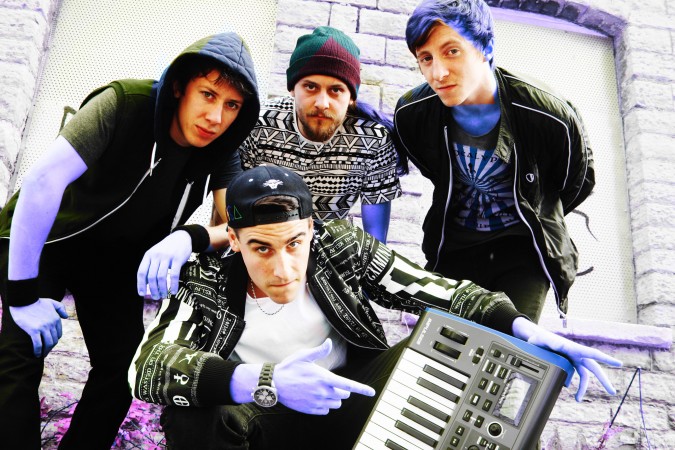 So… When Glastonbury’s UK:ID recently launched the music video for “The Deadly Greys,” a track that has a bit of a different twist to their usual material, I took the opportunity to have a chat with frontman turned music video director Ben-Jah Jon to get a bit of insight into the inspiration and process behind the production. Little did I know that an exciting revelation would arise should see the band evolve and diversify even more as their niche brand of metal, hip hop and drum ‘n’ bass continues to take us southerners by storm. Yes, that does mean you’ll have to read on to find out the big news…

You’ve recently launched the music video for ‘Deadly Greys,’ which I’m told was thought up and directed by yourself, so come on then, what inspired the dark narrative behind the song and the subsequent video?

It was partly that I wanted to cover a subject that’s not as politically sensitive or controversial as all our other tracks, so I came up with this idea to write a song about alien abduction. As well as being an interesting idea to write about I thought it would be cool visually as well when we came to make the video. I thought that having a “Prodigy outaspace” kind of feel to it would suit the sound and vibe of the track. So yeah, the video was made to match the vibe of the track.

I have to admit, when I was told it was a video directed by the frontman I didn’t have high expectations, but I was really impressed with the visual style, shot selection and overall production values. Have you got previous experience in this kind of production?

Well, I studied film and music at uni so that gave me an insight into filmmaking. It’s also something I’ve done as a kind of hobby over the years; I made a few shorts, just for fun, and also a couple of documentaries when I was at uni. This is actually the sixth music video I’ve made, with the help of mates,  so I guess I’m getting quite experienced at it now. Experience combined with experimentation is key in any creative process, I think.

What has the reaction to the video been like?

The feedback on the video’s been really positive. The main question people have been asking is “who’s the amazing female vocalist on the track?”. Well I can announce here and now, and this is a first for all you The Fix readers (you heard it here first folks!), that the voice belongs to the girl who plays the lead role in the video. Her name is Ella and she’ll be officially joining the band in the new year! So we’re all pretty excited about that.

Whoa! Big news! Why have you decided to bring a new member into the band?

It was more of a discovery than a decision really. We invited Ella to do some guest vocals on a track for the album and in the process of the recording we realised that we’d found a top goal scorer—as in our drummer Joey’s the keeper, our bass player KJ’s the defender, Glen our guitarist is the wing man and I’m the centre midfield (like Gerrard) but we’ve never really had a top striker, like a strong vocalist. So that being the case we thought it would be a bit stupid not to invite Ella into the band, and thankfully she said yes! In some ways the lack of a strong vocalist (goal scorer) in the band has always been our Achilles heel, a bit like Liverpool without Suarez: tragic! UK:ID’s going for top spot next season.

What do you think Ella will bring to the table?

Well, she’ll certainly bring some stupidly crazy vocals and hopefully a new dynamic as well, that will take us to a whole new level. We feel we’ve been a bit limited up to now in some ways and have often spoken about how we could use a really good, soulful female vocalist. Ella joining the band definitely fills that void and frees us up from that limitation. She’s the missing piece of the jigsaw, as all other areas are covered.

Okay, so that goes some way to answering my next question, but I suppose I should still ask what else has been happening since we last spoke to you guys? Earlier in 2014 you launched a crowd funding campaign for your debut album, what’s the latest?

We’ve been working hard on the album these past few months. All the recording’s pretty much done now and we’re near the end of mixing all the tracks. They should be mixed and mastered by the end of this year and we’re looking to release it late March or early April so everyone who pledged will finally get there copy!

We’ve been really busy gigging and we’ve been doing all the prep work for the album release as well, sorting out promotional strategies and a release date and all that. And of course we’ve been working and rehearsing with a new band member as well, which has been very interesting. Really looking forward to putting it all together and playing live as a 5-piece soon.

That’s provides me with a swift transition to the last question then – where and when can readers of The Fix next see you live?

We’re booking gigs for the new year at the moment, hoping to put a small tour together for March, April and May to help promote the album, but we haven’t got any definite dates just yet. As soon as the dates are confirmed we’ll release them on our Facebook page and our website. We’ll definitely be looking to play in Glastonbury early in the new year for all our loverly Glasto people, so watch out for that date cos’ we’ll be looking forward to seeing you all there. And if anyone wants to book us or ask any questions just drop us a message on Facebook. Take it steady readers!

And there you have it! You can find out more about UK:ID and get in touch if you like through their official website and Facebook page.

Interview and Introduction by Arran Dutton