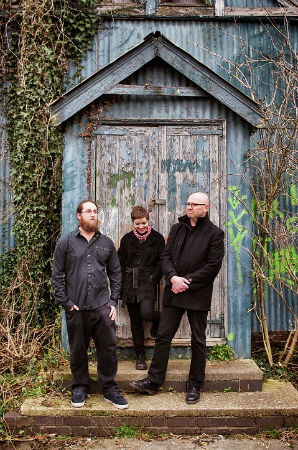 “This Is Pop” – Review by Scott Hammond –

As popular music has evolved over the decades, we find ourselves at a stage where the term ‘Pop’ has become almost a dirty word when describing music; it is now a term rife with connotations of industry types with clipboards looking for talent to tick boxes that adhere to a pre-conceived blueprint for success, or more to the point, record sales.  However, with Wessex based 3 piece Design, it is refreshing to hear accessible, hummable 2-3 minute guitar pop tunes delivered with such aplomb in the live forum.

Seemingly keen to crack on with their set in order to cram as many songs in as possible before headliners Blue Orchids take to the stage, the band take a minimal amount of time to set up and soundcheck before they launch into first track “Kill Someone”. Introduced by bass player Simon Barber as a ‘love song,’ guitarist Helen Stickland’s simple, spiralling guitar riff and power chords during the verse lead us up to the chorus refrain of “and then you kill someone,” revealing the apparent irony of Barber’s introduction.

The diminutive Stickland, the tiniest of presences on stage in terms of physicality, is distended, however, by the pleasingly large, crunchy sound of her Gibson SG and her reverb-entrenched, whirling guitar riffs and catchy chord changes lead the band through “Lookalike” then “Diagrams”. It is during the latter’s drum and bass build-up that one becomes aware of the proficiency of drummer Kyle Cullen; the young Glastonbury based drummer‘s hard-hitting precision timing and rapid fire drum fills throughout provide a solid foundation on which the other band members can thrive.

Such is the incessant, speedy burst through their set, it is not until right before 4th song and future single “Semicircle” that Barber and Stickland say a quick ‘Hello’ to the crowd. The breakneck pace continues with “Woods”, a song driven along by a bouncy bass riff and a simple 4 note guitar solo that seems to espouse the punk ethos of ‘do it yourself’ simplicity over needless virtuosity.

Both Barber and Stickland provide lead vocal duties throughout the set, respectively harmonising at the lower and upper ends of the scale, and it isn’t until after next song “Mantra” that they finally take a short breather to retune their instruments. During this brief hiatus, Stickland introduces “This Is Pop?” the B-side of their recent, self-released debut single. Barber chimes in to make the specific point that the title most definitely includes a question mark to render it an enquiry rather than a statement. Stickland then comments that the audience should really make up their own minds as to the omission or inclusion of the context defining punctuation point. Stickland begins the song’s ominous sounding guitar intro before Barber and Cullen join in to deliver one of the band’s catchiest and most immediate melodies. The lyrics of ‘This is what you get when committees have their say’ and ‘They’ll be gone by Christmas anyway’ at the song’s chorus are obvious sardonic laments as to the contrived manufacturing and transience of contemporary pop; with this in mind it is apt to accept the inclusion of the question mark in the track’s title, rendering it an enquiry of disillusioned deploration as to the state of modern commercial music.

The Ska-esque rhythms of “Can’t Refuse”, containing another example of 3-4 note guitar solo simplicity, then lead us up to the A-side of the aforementioned single “Annalisa”. Also displaying a sensibility of tuneful immediacy, it is the choppy guitar strokes and Stickland’s ascending and descending ‘Oh, Oh Oh’ backing vocals during the song’s eight bar bridges that provide the evening’s most delightful pop moment.  Next up is “Something”, the band’s slowest song with a plodding bass and sparse guitar build up and, with the volume increasing during the chorus, it displays a quiet- loud-quiet dynamic reminiscent of The Pixies and Nirvana.

During next track “If You Like That”, Cullen, seemingly unchallenged by the reality of mere drumming dynamism, starts to throw in some drum stick twirls and his machine gun fill before the vocals re-enter at the song’s later verses leave the audience in no doubt as to his abilities. “Her Name Is” closes the set, the song aptly coming to an end with a dramatic percussive finish from Cullen and after a simple ‘goodnight’ from Barber, the band pack away and depart from the stage.

As the mostly middle-aged audience wait around for headliners Blue Orchids, I ponder on the ‘This Is Pop’ statement/question conundrum and I feel it apt to omit the punctuation mark and view the title perhaps as a statement of Design’s music and how ‘pop’ should be presented. Having just witnessed some charmingly catchy guitar pop delivered with a no-nonsense seamlessness, I am quite content with the assertion that This Is Pop.

And not a question mark, or clipboard, in sight.

Find out more about Design by visiting their page on Facebook