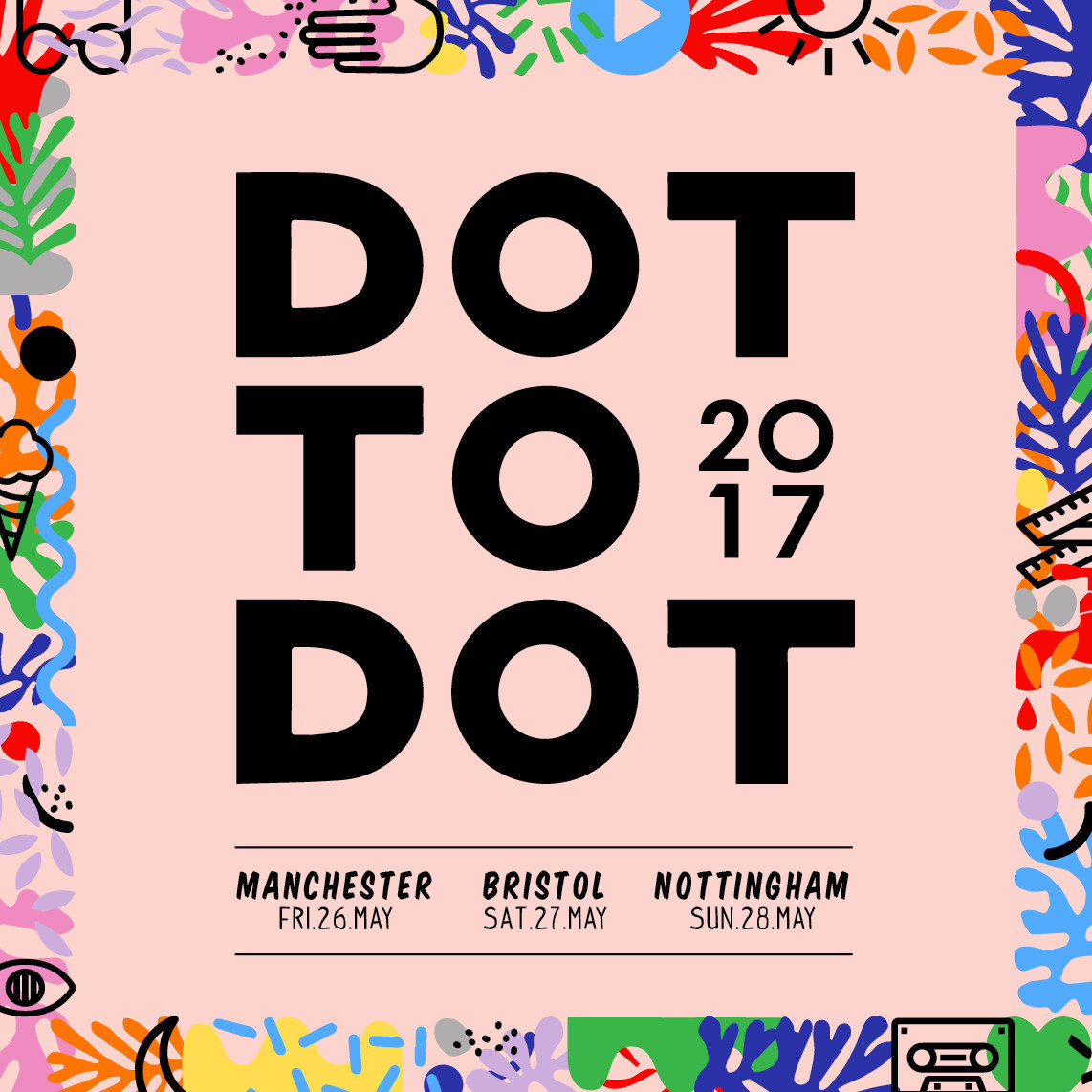 It’s the spring bank holiday once more and we’re all set for the Bristol instalment of Dot To Dot’s twelfth annual bonanza of live music. The precise stats are as follows: during a crammed 12 hour schedule, 160 acts will be performing on 20 separate stages across 15 venues throughout the city centre. How does one decide upon their choices within such an abundant supply of musical spoils? Well, there’s the obvious method of doing one’s pre-festival homework combined with recommendations from friends. However, there’s also a place for the rather more kismet embracing methods of either picking an act with the best/funniest/most appealing name or simply giving oneself over to spontaneity.

You can also opt for the avant-garde angle of following a person with the most uncontroversial protest sign in the history of protest. This is exactly what happens as, on our way to catch Stone Cold Fiction’s 1.30pm set at The Lanes, my photographer and I spot a lady who holds a sign that has “ISIS” encircled and crossed out (like the “No Smoking” sign). Presumably she is off to vent her voice to those mass swathes of people who think that decapitating aid-workers and slaughtering Yazidis is all good clean fun. 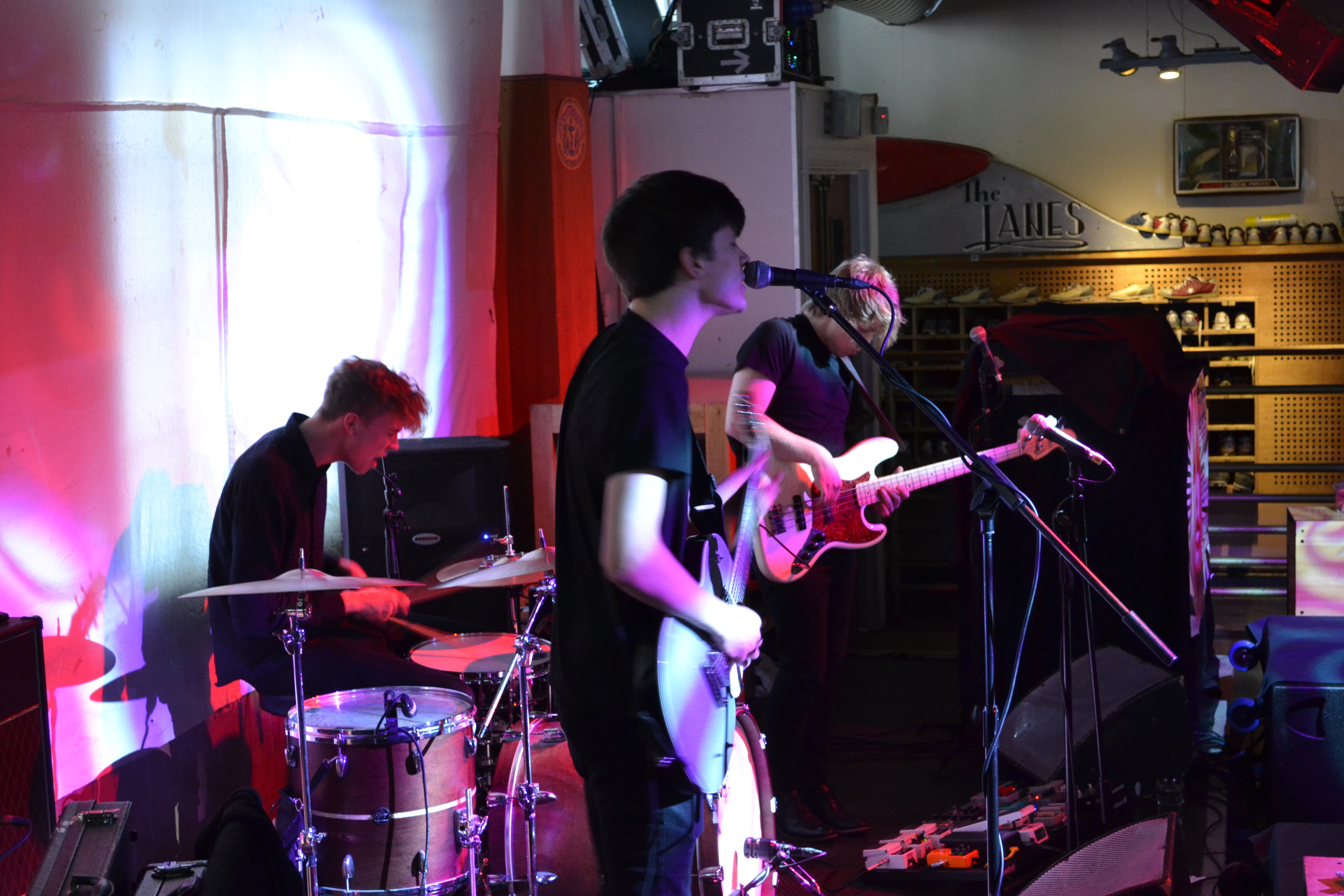 Hailing from just down the road in Bath, Stone Cold Fiction play a decent, quick-fire 20 minute performance that delivers a loud and lively start to the festival. Infused with fuzzy riffs, heavy bass and reverbed guitar leads, the young band sounds like a combo of heavy 1970s rock, blues and Bleach era Nirvana. Promoting songs from their self-titled debut EP, the three piece deliver a five song set; ‘Circles’ contains sparse verses before exploding into chunky heavy-metal riffage while ‘Red Pills’ is a bass-heavy groove which features the band’s speediest guitar soloing. Drummer Alex’s mid-set non-sequitur “I was eating cereal not too long ago” – both for its erratic nature and its informational content – creates the suspicion that the callow skins man is still recovering from a pre-festival bender.

We then march on to The Louisiana and, emboldened by our blue VIP wristbands, we mercilessly jump in front of the considerable number of proles in the queue before learning of a hiccup in our festival plans. New York based electro-pop duo Overcoats have apparently cancelled their appearance but we nonetheless stick with The Louie and make our way upstairs for a rescheduled set by hometown electronic act Body Clocks. Featuring droning atmospherics, tecno-tinged ambiance and swampy synths, the duo intermittently add live guitar, bass and keyboards to their sound. There’s also a surprising evocation of Jimmy Page when a live guitar part is played with a violin bow. It’s relatively busy in the Louie’s tight live music space and, bobbing their heads and manoeuvring their bodies to the music, the two musicians are clearly into their performance. However, with the sun shining outside, it only being three in the afternoon and no one visibly gurning their proverbial tits off, one suspects that Body Clocks’ high energy set would be better appreciated at a later time slot. 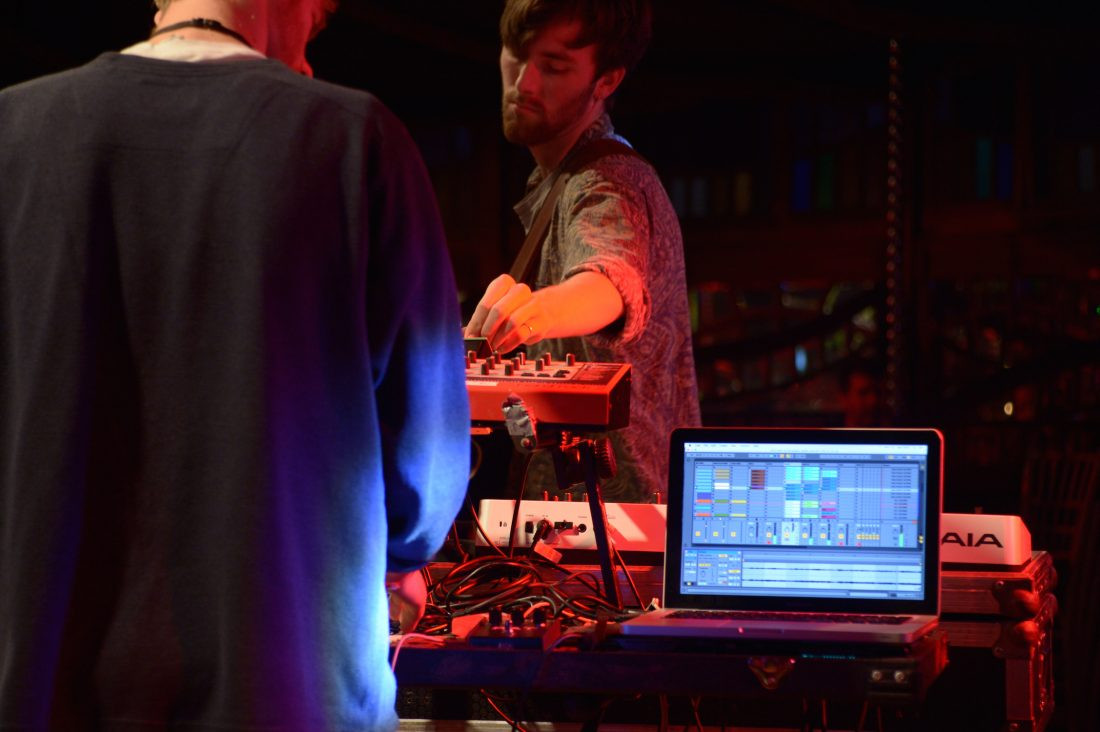 After the first slight hiccup of the day, the second quickly follows as we head to the Thekla’s top deck and the scheduled 3.30pm performance by C.Macleod. Confusion reigns and the band taking an age to set up their equipment look like they probably have little to do with the Scottish singer-songwriter. Who is the band? Why are they taking so long? Is the impatient bass player who appears to have set up his equipment an hour ago aware that he looks exactly like Matthew E White? All we know is that two members of the band have dapper matching red suits and that there’s no more time to stick around before Vagabon’s 4pm set down on the main deck. 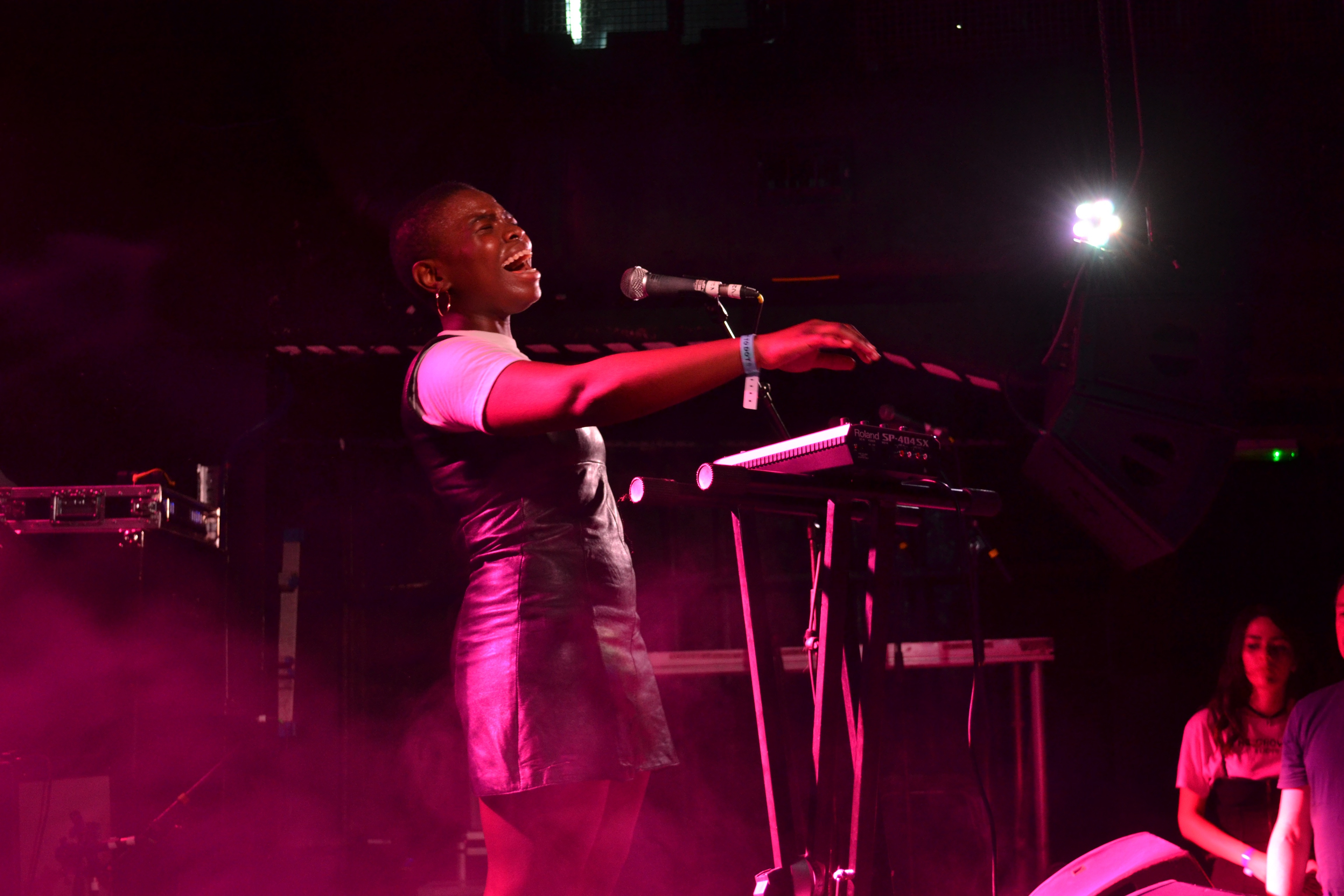 A solo project of Cameroon-born and New York City-based Laetitia Tamko, Vagabon plays a blend of lo-fi and indie folk. After the slightly distorted finger-picked guitar of opener ‘Cold Apartment’, Tamko states that it’s the first time she’s been in Bristol and that “it’s pretty sick that you have a venue on a boat.” Backing herself with guitar along with looping synths and percussion tracks, Tamko’s five song set features tracks from debut album Infinite Worlds. ‘The Embers’ stands out as a highlight as, in her big smoky voice, she sings “I’m just a small fish” while the song’s muse is “a shark who eats everything.” At the close of a short and powerful set, the diminutive performer‘s shaky hands in turning off her looping machine attest to some hitherto unnoticed nerves.

Before catching the 5:15pm set by Freak in the O2 Academy’s second room, curiosity results in a brief glance at Tom Grennan’s performance in the main room and it appears as though he is smashing it. The Bedford-born singer-songwriter’s huge voice fills the room and leads a crowd singalong of “They don’t make ‘em like you no more” and, subsequently, ‘Barbed Wire’ is rapturously received. 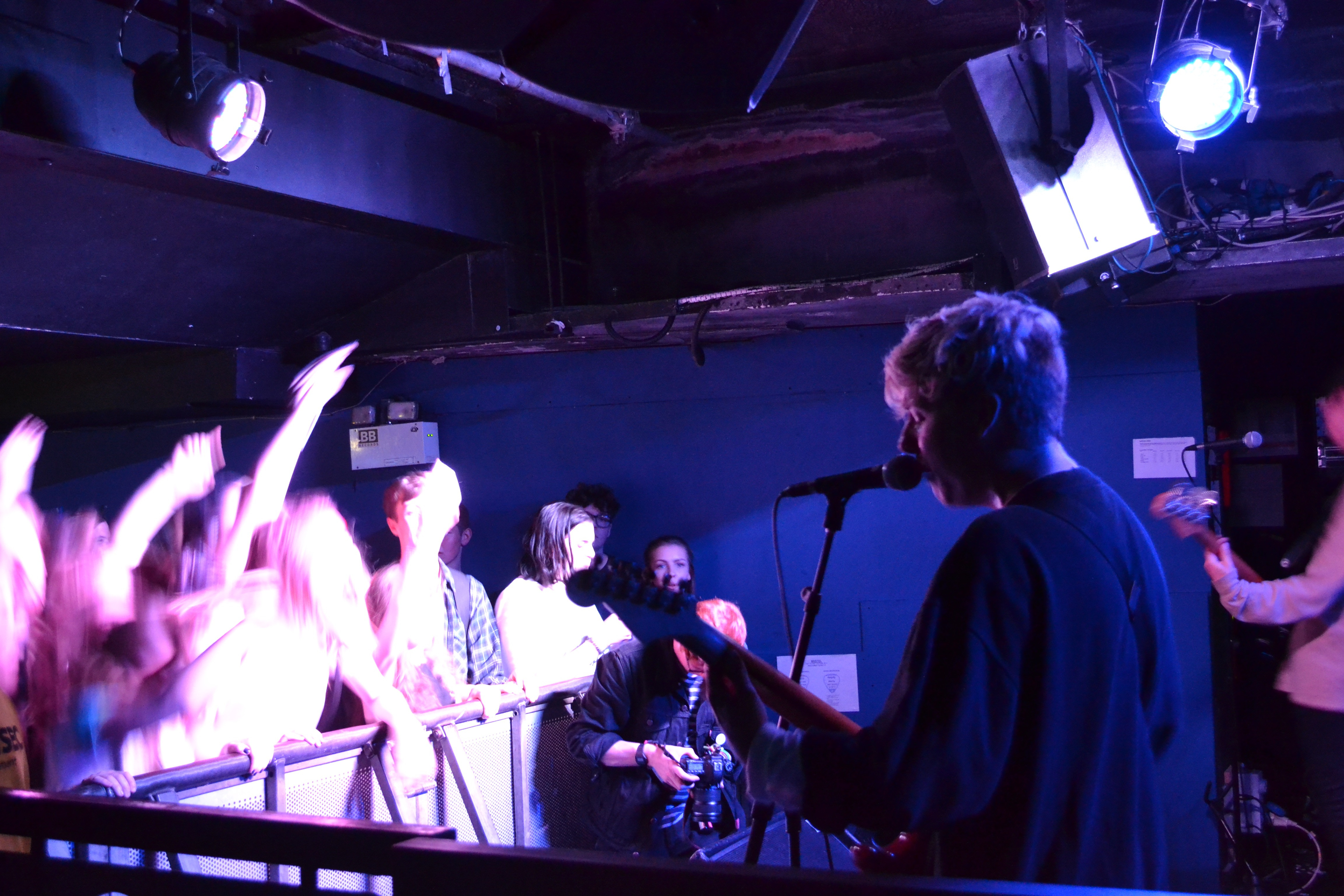 Previously branded as “a one-man Nirvana” by The Guardian, Freak is the vehicle for 19 year old Chelmsford rocker Connor Ridd. With drummer and bassist completing the three-piece, Freak deliver a searing set of energetic pop-punk. “We can’t play properly if you’re not moving” Ridd encourages the crowd a second time after the set’s opening two tracks. By the time the frenetic ‘Floating High’ kicks into gear, Ridd has manufactured a mosh-pit of slam-dancing and mass pogoing. Despite the disgusting displays of surrounding youth, it’s refreshing to see a couple in their 50s dive headlong into the chaos. An unlikely cover version appears in the form of Britney Spears’ ‘Toxic’ and the lyrics to ‘What Happened?’ reveal an unabashed angst (“someone help me with my problems.”) More Billy Joe Armstrong than Kurt Cobain at this stage but a dynamic and enjoyable set.

It’s a packed main room at SWX for the 6.45pm set by London indie quartet The Big Moon. A Pieminister pit stop and a fondness for my own voice means that we arrive slightly late but it’s sufficient timing to catch standout track ‘Cupid’ and its pleasingly instant guitar/vocal hook. It’s the second of the day’s slightly left-field cover versions as the band launch into Madonna’s ‘Beautiful Stranger.’ Animated lead singer Juliette Jackson is clearly enjoying herself as she struts around the stage in ‘Walk Like An Egyptian’ type fashion and a sharp set reveals a fun band full of potential. With a Pixies-esque quiet/loud dynamic and a guitar sound spanning Britpop and post-Libertines era indie, a full listen to debut album Love in the 4th Dimension could be in order. 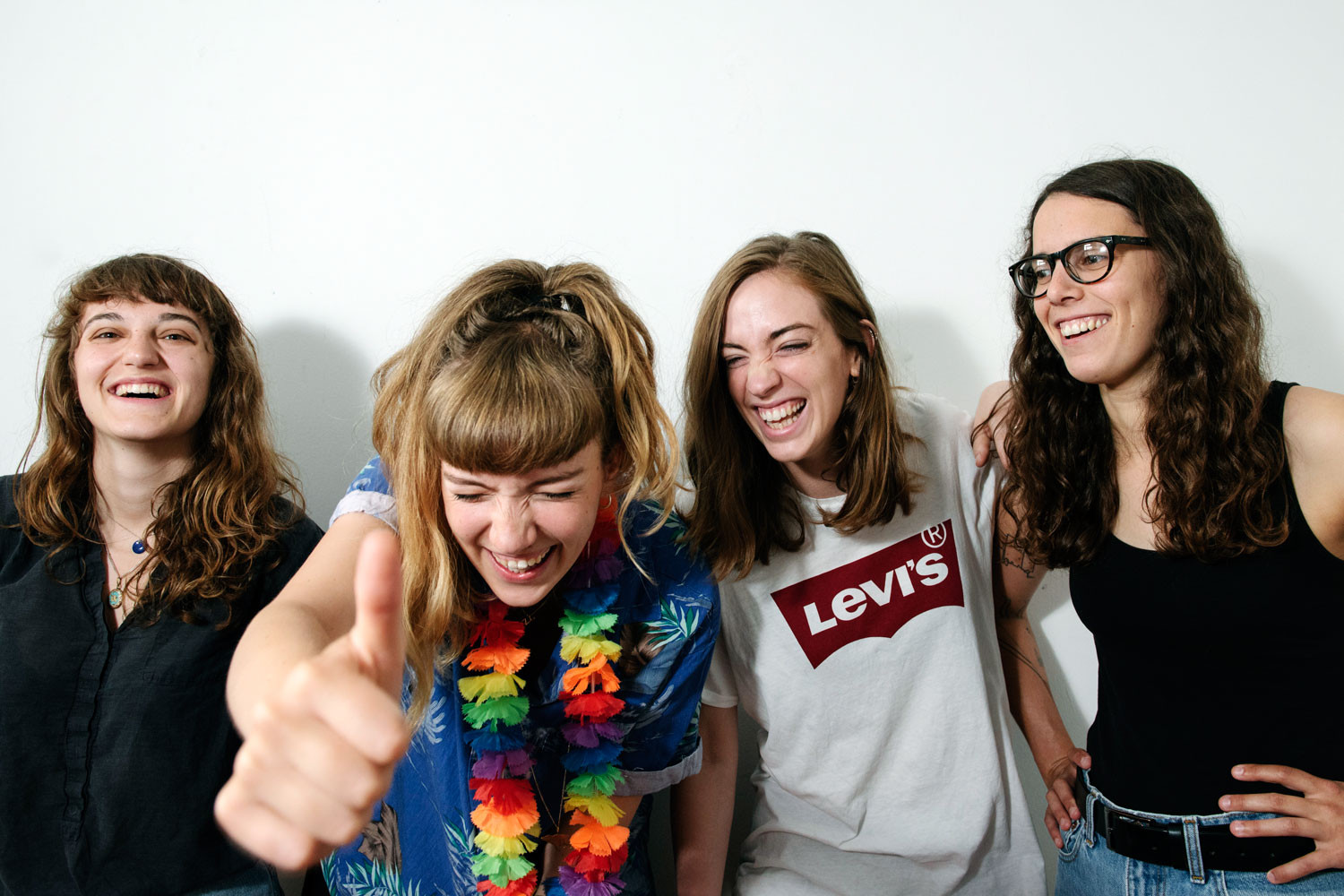 Made up of four Latinos and a token Gringo, California-based Mystic Braves have been dubbed “the Mexican Beatles.” Speaking of mysticism, local legend Jeffrey “Big Jeff” Johns has seemingly managed to instantaneously teleport from the stage front at SWX to the front row of Bierkeller. Quite overtly in thrall to the psychedelic rock of the 1960s, Mystic Braves –all hippy garb, retro barnets and Sgt Pepper-era ‘tasches – give the most convincing experience of time travel that didn’t require a flux-capacitor. With the circling chord progressions, laidback melodies and psychedelic keyboard sounds on tracks such as ‘Bright Blue Day Haze’ and ‘Mystic Rabbit’, the group play an authentic sounding 60s rehash. However, it all feels a little too stoned and soporific; bassist/waxwork Tony Malacara – who plays a fetching bass guitar/loot hybrid – has either consumed a heroic dose of Quaaludes or is the most stoic man in music . Elsewhere, one is somewhat surprised to see an advertisment for Jack Bauer’s appearance at the ‘keller on 20th June. 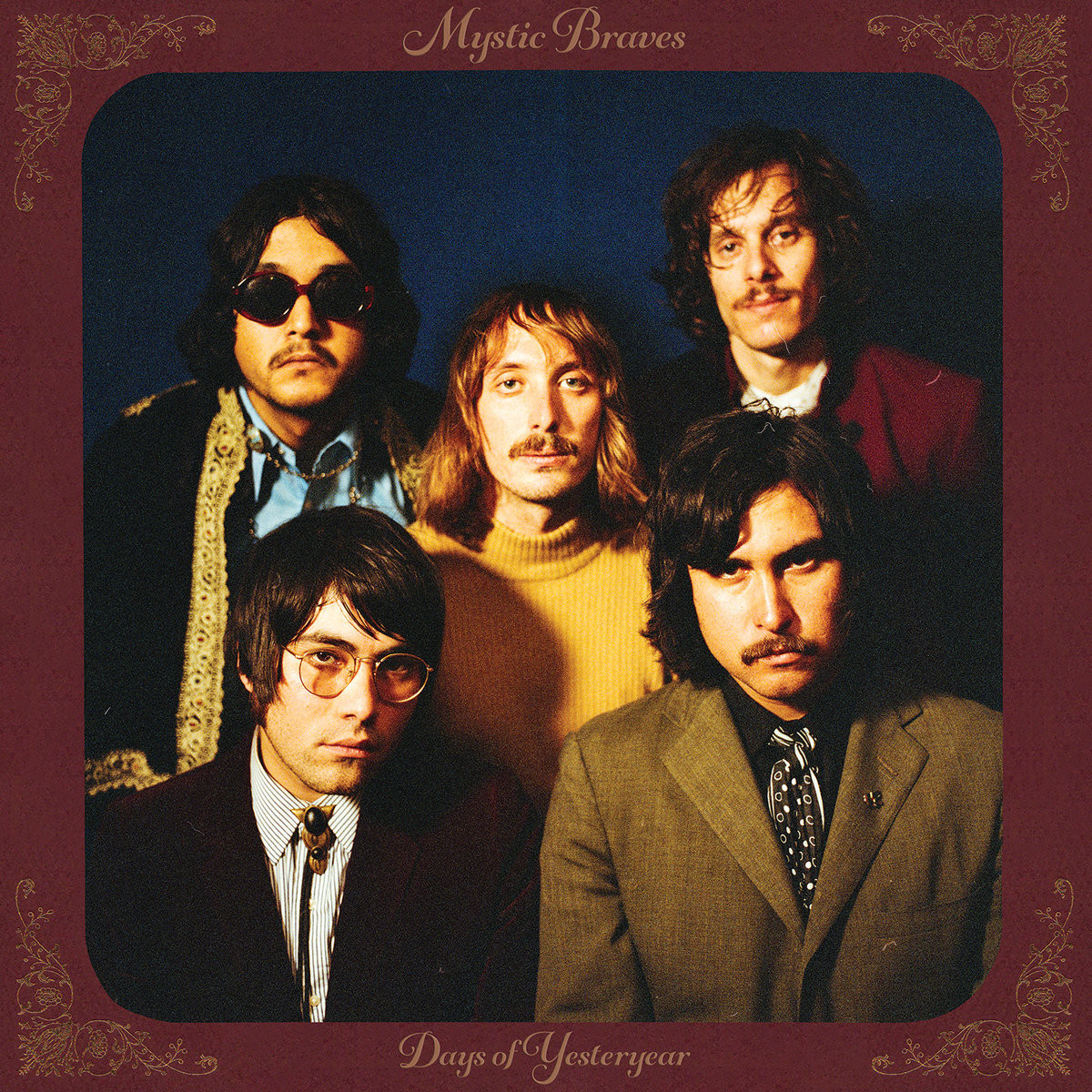 And finally it’s time for co-headliners, and the band named after my personal favourite euphemism for the female genitalia, The Growlers back at SWX. We walk in to the novel sight of frontman Brooks Nielsen sound-checking his mic by reeling off the names of his preferred vegetables. ‘I’ll Be Around’ – featuring its “Shake me up” singalong – is a strong start while the soul-pop of ‘Love Test is further evidence of the band’s hard-to-pin-down sound. Spanning garage rock, psychedelia, funk and moments tinged with ska and reggae, the Californian band have the fairly original virtue of not being obvious as to their influences. 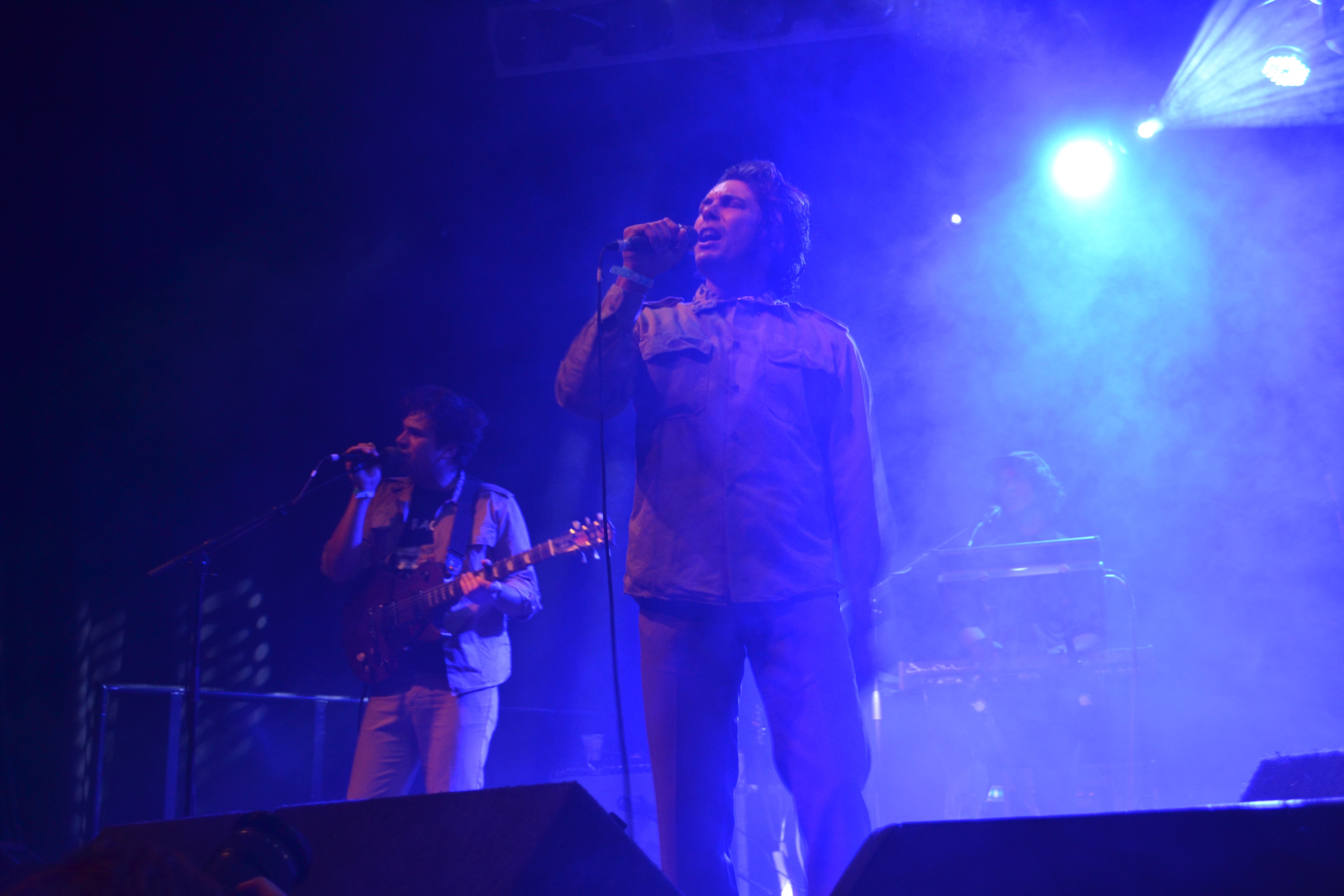 Though a post Dot To Dot foray into The Growlers’ cool and catchy back catalogue has produced a nascent personal obsession with the band, the first half of the performance feels a little pedestrian and it takes the one-two punch of ‘Vacant Lot’ and the title track from latest album City Club to kick things into gear. Right ahead of us, there’s the unusual sight of the band’s soundman occasionally pitching in with backing vocals and thus a slight element of Milli Vanilli-esque duplicity – what is coming from the stage isn’t all from the band. Nielsen is an off-kilter and watchable frontman – all camp shimmies, mincing hand gestures and Ian Brown type mic movements – and he sings with an oddly effective voice that is at once gravelly, high pitched and with a tinge of Rastafari.

Set closer ‘Going Gets Tough’ is instantly recognisable as a quality tune and assures that The Growlers will be subject to some rigorous post-festival research. I then ask the singing soundman for the setlist to help with this review piece and he tells me that somebody else has already asked for it. A rather corpulent young chap then appears in order to collect the setlist; the soundman, noticing the man’s size, then cruelly says “go on, show me your tits” before handing it over. I’d imagine that the poor chap ended up walking to the nearest M&M for a comfort kebab in tears.

As ever, an enjoyable and varied Dot To Dot experience.