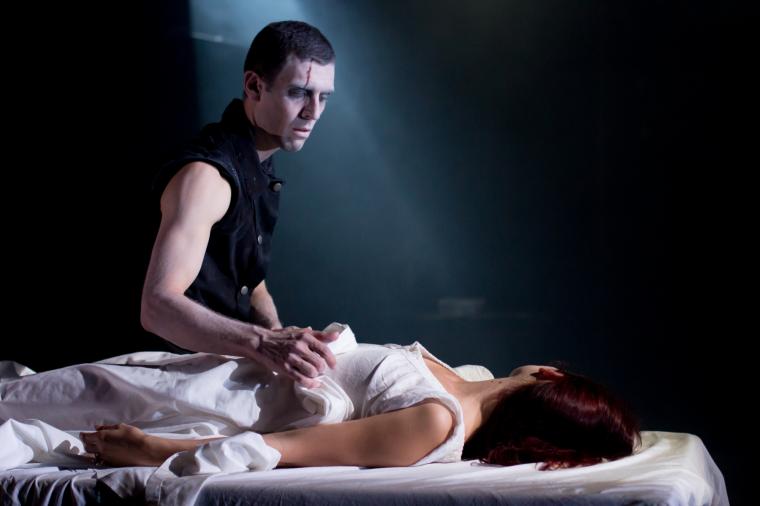 “Welcome to my house. Come freely. Go safely; and leave something of the happiness you bring.”

Returning to Bristol until Saturday is Mark Bruce’s Dracula, first staged here in the city last year under the production of the Tobacco Factory. Having received critical acclaim and picked up the prestigious South Bank Sky Arts Award for Dance, it is no surprise the show has been revived from the dead and relocated to the larger Old Vic theatre across town.

With a ten-strong gambol* of dancers performing to a diverse soundtrack of Mozart, Bach and Fred Frith amongst others, the haunting tale of Bram Stoker’s devilish Count manages to find fresh blood in this superbly restless adaptation.The show begins with the Count emerging sulphurously from the gothic backdrop, backed by wolves stealthily encroaching upon the stage. The tension racked up in the audience is palpable, and this tension remains throughout the performance as the familiar tale of Dracula unfolds with steely purity.

It has to be said that, alongside Jonathan Goddard’s muscular Count, the stage set is the star performer. A relatively sparse yet transformative one-piece construction, it shows at various points a castle upon a cliff, a lover’s den and a graveyard. The stunning use of lighting, utilised to create texture on stage, ensures that at no point in the performance does it look like the same setting. The dance structure as a whole is highly impressive, blending more traditional dance in scenes including the three coquettish female vampires, with more interpretive movements, such as the final hunting of the Count. The performances are outstanding and certainly raise the stakes when it comes to dance theatre.

It is helpful, of course, that the performance is based on as famous and identifiable a story as Dracula. Previous Bruce presentations, such as Euripides’ ‘The Bacchae’ (2010), have not necessarily shared this advantage. With ‘Dracula’, it is immediately apparent to any potential audience member that they are in for a macabre evening. Nevertheless, the quality of the dancing, allied with superlative stage construction and lighting and a throbbing narrative make this adaptation of Dracula a masterpiece. A bloody good show.

*Yes, that is the collective noun for a group of dancers