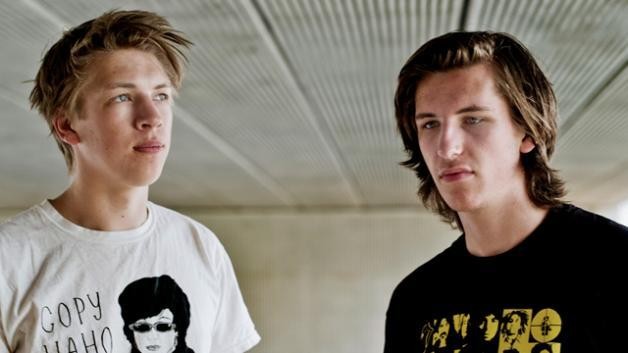 Rather than making reference to their touring an album of new material, Sheffield rock outfit Drenge’s ‘Grand Reopening Tour’ alludes to a three year hiatus – both in terms of a headline UK tour and the release of a new record – and emergence from a brief stay in the musical wilderness. An American prom style banner bearing the ‘Grand Reopening’ moniker and the sight of a red-ribbon across the stage manufactures a sense of occasion; guitarist/vocalist Eoin Loveless, with what seems a faux sense of awkwardness, reads from a sheet of paper to introduce the reopening while drummer Rory Loveless cuts the ribbon with a exaggeratedly cheesy grin. Within the goofiness lies a true sense of rebirth; originally starting out as a sibling two-piece, the brothers Loveless have been joined by a fourth musician on guitar/keyboards to go alongside established bassist Rob Graham.

Opening track ‘Bonfire’ – a new song and in tune with the theme of starting afresh – sees Eoin’s spoken-word delivery of what has the ring of a sociopolitcal manifesto (“millions of people out there, fucking, fighting, sleeping and eating”) before the band kicks in with a ferocious salvo of drums and guitars. ‘Face Like a Skull’ is a sulky but lively expression of teenage nihilism and features a two chord motif that appears to have inspired Courtney Barnett’s ‘Nobody Really Cares If You Don’t Go To The Party’. Its quiet/loud dynamic provides the soundtrack to a flashing light show and the first of several incidents involving a plastic receptacle of beer being flung towards the mosh-pit.

If one is to play the genre labelling game with a band like Drenge, the term ‘alternative rock,’ bearing in mind their scope of influences, seems the safest. Considering the band’s origins as a duo, there’s the recurring likeness to the garage rock of The White Stripes while the use of deep riffs recall something more akin to heavy metal, or at least Bleach era Nirvana; elsewhere Drenge display a frenetic punk energy and a sense of melody more befitting indie or the new wave groups of the 1970s – ‘The Woods’, for instance, recalls mid-2000s group The Departure and contains a vibe similar to The Jam’s ‘The Butterfly Collector.’

For the most part, Drenge share the Oasis-esque tendency to stand fairly motionless and let their considerable sonic rumble do the talking. There are exceptions though; new song ‘This Dance’ – featuring perhaps Rory’s most riveting machine gun drumming – sees Eoin take leave of guitar duties and gyrate around stage in a manner that Ian Curtis would’ve been quite pleased with. It induces the elder Loveless into one of his scant between songs utterances when he jokingly asserts “I’m working on my dancing.” It’s also a song that sees the fourth musician, as the sole focal point on guitar, sprinkle some style into the manoeuvring of his instrument – it’s a brief injection of stage presence that one wishes to have seen more of.

Though there is undoubtedly more to the band’s sound, it could be argued that Drenge are at their best when executing relatively rudimentary, riff driven, two minute bursts of punk rock. The raw edginess, and the somewhat disturbing sentiments of ‘Dog Meat’ (“Cut up my tongue and turn it to dog meat/give it to the hobo/give him words to eat”) is a solid example of this while ‘People in Love Make Me Feel Yuck’ – if only for the satisfyingly puerile recalcitrance of its title – is a pleasingly dumb blast of rambunctiousness. Similarly, there’s the chugging riffs of ‘Bloodsport’ – tonight cranking up the chaos of the mosh-pit amidst a frenzied shower of strobe lighting.

The encore sees Eoin – now sporting the curious combo of tiara and acoustic guitar – emerge from the stage and crouch amongst the audience for a rendition of ‘Fuckabout.’ Though this has become a tour staple, the sight of a band’s lead singer surrounded by fans and performing a tune as if placed around a camp fire is a novel and charming one; the audience respond in kind with a hearty singalong – particularly after the singer drops out after fluffing the lyrics – and a sea of smartphones to capture the intimacy of the moment. The night ends on more familiar terrain with ‘Running Wild’; it’s an apt title for the rowdiest moshpit of the night. Drenge have compered a blistering ‘Grand Reopening’.