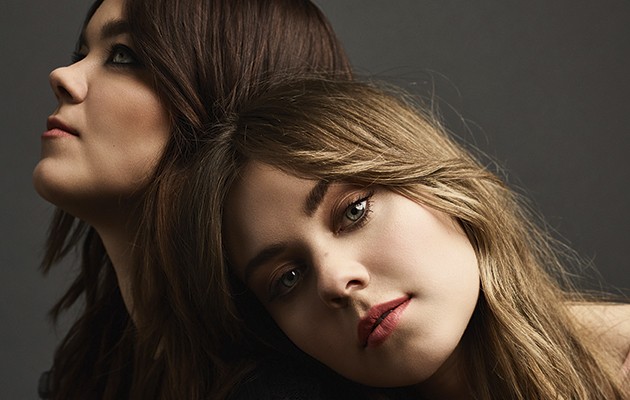 When three unfamiliar musicians enter stage left at 8.30pm and perform a short instrumental interlude, one can be forgiven for feeling a slight sense of confusion. A rugged, long haired guitarist stands in the spot once occupied by short and cuddly axe man Melvin Duffy. The drummer and keyboardist fail to ring any bells. Sisters Johanna and Klara Soderberg – each adorned in typically retro 60s jumpsuits – then walk into shot and instantly assuage any doubts that we’re at the right gig. This side of the pandemic, First Aid Kit are a slightly altered beast; an alternative line up of live bandmates, new material in the works, and with the Soderberg sisters still, unbelievably, just 31 and 29 years of age, an exciting new chapter awaits.

Opener ‘King of the World’ is a quintessential statement of the Soderberg’s M.O – a functional marriage of breezy musicianship and world-weary lyricism – and the raptuous applause at its conclusion confirms the healthy presence of affection amongst the harbourside audience. Klara bellows “Bristol!!” in introduction to ‘It’s A Shame’ though her sardonic “That’s a perfect start” after some baggy musicianship during the intro is the night’s only discernible evidence of a new lineup still finding its feet.

Before ‘Stay Gold’ – the excellent title track from First Aid Kit’s breakout third album in 2014 – Klara states how great it is to be back in Bristol before reminiscing about a past show at Thekla and the presence of Jeffrey ‘Big Jeff’ Johns. There’s a sighing expression of love within the crowd as the younger Soderberg sends best wishes to Jeff after his recently incurring serious injuries in a house fire.

Having bared consistent personal witness to their career progression in the decade since a tiny show at Moles, Bath in 2012, it’s hard to get away from the fact that First Aid Kit’s propensity for finely crafted folk-pop tunes alongside deceptively weighty lyricism (loss, mortality, existential ennui, the inevitability of ageing as expressed in ‘Stay Gold’) are best suited to smaller venues.

However, it is larger shows like this that remain impressively, and necessarily, anchored by the power in each sister’s voice; Klara’s striking lead vocal glides both powerfully and elegantly atop her quietly strummed acoustic and Johannes Runemark’s aching slide guitar in ‘To Live a Life’; ‘Fireworks’ has the sisters exchange lead verses before those trademark harmonies explode wonderfully into the rousing laments of its choruses.

There are a string of songs that by now have the feel of being the band’s true classics; ‘Emmylou’ follows 11th birthday wishes to a girl in the audience and it remains their best loved singalong while ‘The Lion’s Roar’ maintains its bolshy folk freshness, and continues as the Soderberg’s go-to song for sending their lustrous follicles into a headbanging salvo. Alongside the familiar tunes, some new material is showcased: ‘Out Of My Head’ and ‘Angel’ hint at a potentially more upbeat (musically at least) and poppy approach to album five. There’s also a somewhat unlikely but enjoyable cover version in the form of Don Henley’s 80s classic ‘Boys of Summer.’

First Aid Kit have made for a salubrious atmosphere within Lloyds amphitheatre; there have been a few drunken but harmless heckles, large pockets of arm swaying, the pleasant sight of children atop parents’ shoulders, clap-alongs and some instructed and impromptu sing-alongs. A three song encore features Stay Gold heavy hitters ‘Master Pretender’ and ‘Silver Lining.’ Both contain the distinct feel of being well-loved and enduring melodies and remain high bars for any future material by the sisters Soderberg. Now four and a half years since Ruins, tonight has served to whet the appetite even more for the long awaited follow up.