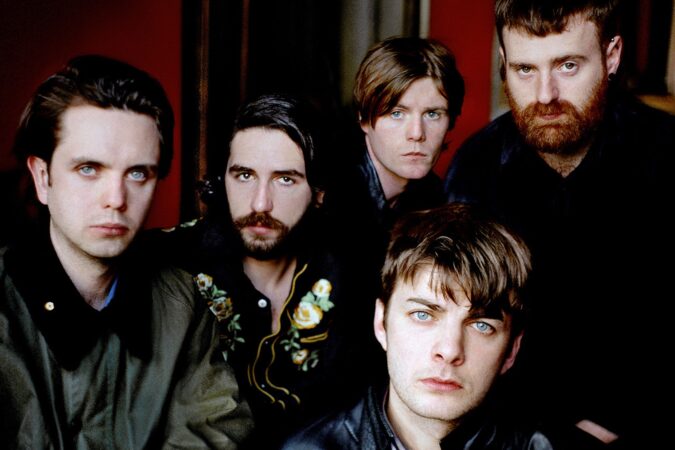 A five-star Guardian review of DC Fontaines’ show at the University of Liverpool earlier this month saw them brandished with the oft touted, and seldom anything but hyperbolic, moniker of a “once in a generation” guitar band. After 2019 debut album Dogrel received praise across the board, and last year’s follow up A Hero’s Death seemed to effortlessly dispatch perennial notions of “difficult second album syndrome”, this year’s UK tour – after momentum lost during the all-encompassing hiatus of 2020 – sees the Dublin post-punks strongly poised to vindicate such gleaming endorsement.

Before the band appear on tonight’s stage, a sense of drama in the form of soft lights and Tom Wait’s sombre ode to death ‘Dirt In The Ground’ builds upon a stark anticipation that has been mounting amongst the bustling crowd. Opener ‘A Hero’s Death’ sees frontman Grian Chatten, in his forthright Irish delivery, speak-singing the mantra “life ain’t always empty” and a lyrical list of rules for the soul (“Tell your mother that you love her/And go out of your way for others”). While, of course, giving a titular nod to our universal fate of oblivion, it feels like a bracing, life-valuing antidote to Wait’s musings of existential futility.

It also serves as an apt example of the band’s modus operandi of the clipped, ragged poetry of their lyricism – delivered by Chatten, without too much concern for melody, as near spoken-word – and the bolstering twin tensions of jangling, hard-edged and atmospheric guitar work. It’s lively amongst the crowd; the upper balcony feels like it’s wobbling beneath the enthusiasm and at stage level someone launches a plastic beer cup that strikes the drum kit during the opening bars of ‘A Lucid Dream.’ Following track ‘Sha Sha Sha’ – featuring more adroit, semi-poetic nuggets (“You’re so real/I’m a show reel”) atop cool jangling guitars – ends with vest-adorned guitarist Carlos O’Connell on top of an amplifier and the charming, though desultory sight of his drinking beer from a glass tankard.

It seems that a few factors are explaining of Fontaines DC being an undeniably outstanding live band. Firstly, it’s very difficult to take one’s eyes off the singer; Chatten has the energetic, scallywag demeanour of a benign but always sozzled teen in the local pub. He restlessly strides about the stage like a methhead who has forgotten where the exit is, yanks persistently at his drenched T-shirt, celebrates his lyrics one arm aloft like a bellicose football fan and intermittently double slaps himself in the face. He brings to mind iconic frontmen, past and present: he has a taciturn charisma of an Ian Curtis (he only growls a solitary “hellloooo” seven songs in), executes some angry Joe Talbot-esque foot stomps and, tambourine in hand, a walk-on-the-spot shuffle akin to Ian Brown.

Secondly, despite the margins for artistic originality growing smaller as time marches on, there is something idiosyncratic about this band. While myriad influences have been cited by the press and the group themselves – The Pogues, Girl Band, The Fall, Public Image Ltd – Fontaines DC possess that intangible ability to process the past and repackage it in a way that feels unique. No doubt a significant ingredient in all of this is Chatten’s choice to go full Irish with his vocal delivery; nearly 40 years after Shane MacGowan, or even 15 years since Alex Turner, imbuing ones singing voice with an unfettered natural accent still feels like an act of relative originality.

Lastly, they are a rare band whereby the music is more enjoyable when played live; despite their considerable knack for wordsmithery, the band are fond of repeat lyrical mantras that, when listened to on record, has you occasionally wishing for a melodic or lexical digression. However, when bolstered by the air of communion and audience participation, repeating lines such as “There is no connection available” during ‘Hurricane Laughter’ or “Is it too real for ya?” in ‘Too Real’ sound positively riveting.

Fontaines DC are a proper rock band. Though one always feels keen to resist grandiose praise such as that asserted by the Guardian, there’s enough evidence here to suggest that there may well be something in even the most portentous of claims.