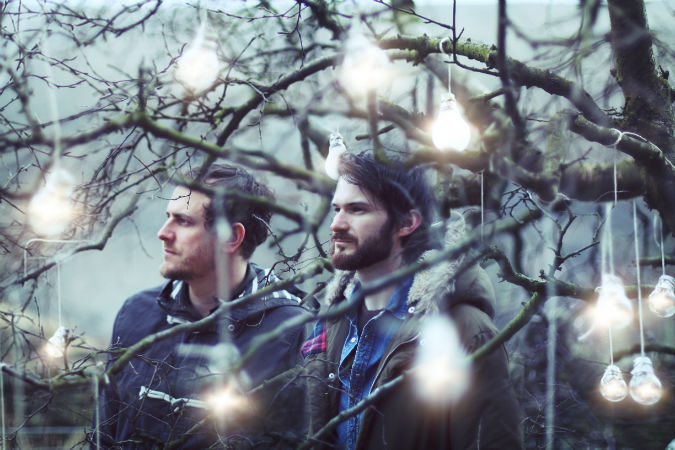 Rising like an ethereal folk phoenix from the ashes of erstwhile Leeds five-piece Vib Gyor, Dave Fendick and Johnny Hooker are certainly starting to make waves with their new project. Having released their debut album ‘Tell Where I Lie’ at the beginning of April, the Fossil Collective adventure has brought them here to The Louisiana on the 10th date of a 21 date UK tour. With the new record having attained the respectable heights of number 22 in the British iTunes chart and headline North American shows already on the agenda at the end of the year, one cannot help but sense that opportunities to catch Dave, Johnny and their collective of musicians for £7 a ticket in the confining intimacy of such a place as ‘The Louie’ may be running out.

Opting to set up as a five piece for tonight’s show; two guitars, drums, bass and keyboards begin the set with “Under My Arrest”, a song that immediately displays the lilting falsettos and folk harmonies that have sparked comparisons to contemporaries such as Fleet Foxes, Bon Iver and Midlake. The crowd, seemingly subdued throughout the night’s support acts, display an understated, studiously reverential tone that in some way feels like the personification of the music that they have come out to enjoy. The crowd’s silence, however, is broken at the end of the set opener when someone, either a die-hard Fossil Collective fan or a besotted new convert, bellows ‘I like you!’ in a strong wurzel-esque burr from his position at the front. Frontman Dave Fendick then engages in some benevolent banter as to the absurdity of the Bristolian accent and an affable rapport between band and audience has been forged and sets the mood for the remainder of the evening.

Next up is album opener and first single “Let It Go”; its bouncy acoustic rhythms and instrumental keyboard breaks making it possibly their most accessible song. The track is a stand-out with haunting harmonies and the lyric ‘we tried to light a fire without a flame’ lamenting the futility of trying to build a relationship without the existence of that essential spark between two people. The next six songs follow the exact sequence from their debut and further highlights the confluent versatility of the ‘collective’ mentality; Drummer Johnny utilises his microphone for the first time as he joins in with the three part harmony intro to “Boy With Blackbird Kite” and the electric guitar makes a welcome appearance, first with echoing guitar fills picked out between the lyrical melodies of “Wolves” and a reverb drenched slide guitar solo during the song’s instrumental break. “Brother” and “Monument” follow, the former recently voted Q Magazine’s ‘Track of the Day’ and the latter a further example of spine-tingling falsetto harmonies overlaying an initially sparse arrangement of strummed acoustic and fragile electric guitar arpeggios before breaking out into lustrous synthesised violin and pleasantly soft piano lines.

Fendick generally keeps the banter to a minimum but, in his introduction to “On and On”, he informs the crowd that it was the first song that he and Johnny ever wrote. It is on this track that one can fully appreciate Dave’s vocal abilities, the plaintive but soaring refrain of ‘You are the one’ at the song’s coda being the moment that he is most reminiscent of Radiohead frontman Thom Yorke.

After completing the album’s ten tracks and looking on the verge of packing away their instruments, the band, to the delight of the audience, decide there is enough time for another song. “Rivers Edge” from 2012’s ‘On and On’ EP sees more instrument swapping as the bass player eschews his usual role and provides a second rhythm as a counterpoint to Hooker’s drumming.

Then it is definitely time to go home as the band put down their instruments and head backstage. The largely youthful audience then make their way downstairs and, before dispersing into the balmy Saturday night air, I’m willing to wager that most are of the opinion that Fossil Collective’s brand of melodic, harmony laden folk is well worth excavating from the underground and sharing with the outside world.

Find out more about Fossil Collective by visiting their official website