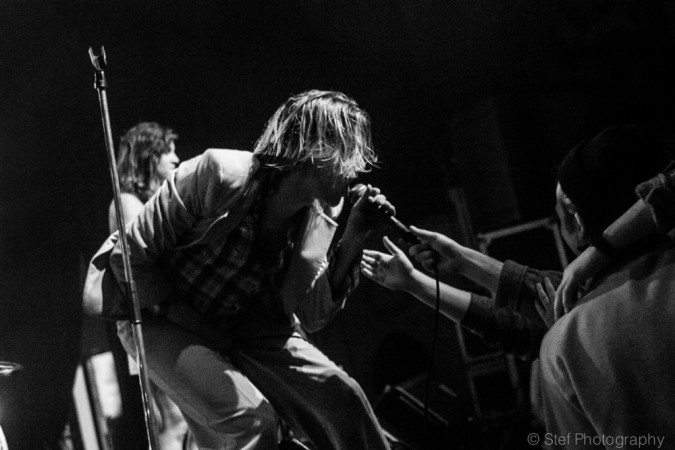 With frontman Sam France’s penchant for volatile stage antics (smashing himself in the face with a microphone, climbing speaker-stacks, confronting hecklers, breaking his own leg), Californian psychedelic rockers Foxygen have established a growing reputation for eccentric, high-energy live performance. Leading up to tonight’s show, the spectacle of France’s unpredictability provides an anticipatory glee that surpasses anything relating to his sporadically fruitful collaboration with musical partner Jonathan Rado. As France’s unhinged ringmaster leads us through a performance that is as much a weird form of variety act as it is your traditional gig fare, indeed the music is rendered almost secondary.

The sound of a Wurlitzer fairground organ plays over the venue’s speakers as the audience await the band’s arrival on to the stage; replete with flowers, paisley patterns, severed mannequin heads and large pentagram, it’s a setting that harks back to the Summer of Love had it only been curated by Aleister Crowley. France, an androgynous Mick Jagger/Brett Anderson on amphetamines, sets his frenetic tone from the off as he bounds energetically on to the stage while kicking and gyrating his way into a fierce sounding ‘We Are The 21st Century Ambassadors of Peace & Magic’. Sharing his time in the audience, on his knees and at one point on a high parapet to the side of the stage, France is all apoplectic animation.

The powerful synths and sharp guitar stabs of the excellent ‘On Blue Mountain’, its blatant pilfering of ‘Suspicious Minds’ aside, provide the first moment of genuine musical interest; with France and Rado supported by two guitarists, bass, drums and three female singers/dancers, the band provide a satisfyingly bombastic soundtrack to France’s pulling faces and placing his microphone into the crotch of his trousers. “I broke up with my boyfriend today…and my girlfriend on the same day” France states before downing half a lager and launching the band into the slow, romantic shift of sixties pop charmer ‘Coulda Been My Love’.

A few songs into the set, the band’s impactful sound, the general aura of mania and an addictive curiosity as to what France will do next, make for encouragingly early signs that this is exactly how a gig should be. However, things soon descend into bizarre contrivance and the surrealist cabaret begins; a fake argument starts up between bass and guitar players leading to a mid-song jousting with pretend swords, there are purposely bad jokes and faux maniacal laughter along with decapitated clown dolls and a band argument over card game Go Fish. The weirdness reaches a head when a song is aborted early and the band depart from the stage for an intermission during which we hear a sped up, skipping version of ‘San Francisco’ played over the speakers.

Foxygen’s latest album …And Star Power was a double CD full of rough sketches where attempts to cram perhaps too many influences into one place left just a myriad of seemingly unfinished jams; similar judgements can perhaps be made here as, having used up their stronger material, some of the tracks sound like nondescript backdrops to facilitate the lunacy. There are effective moments though: For instance, the thrilling pace shifts of the energetic ‘Shuggie’ and the clean guitar tones of the Dylan-esque ‘No Destruction’.

There’s no doubt that Foxygen’s approach to live performance is such that it will divide music fans; tonight’s show is likely to be talked about by some as a favourite ever gig-going experience while others will be left a little nonplussed, if not confused. This was evidenced early on with some of the crowd seen backing away from the stage (presumably to avoid the throwing of water or the threat of an inadvertent elbow in the windpipe from a flailing France), while good numbers at the front were clearly happy to be as close to the madness as possible.

With such a performance, there is undoubtedly some value in its uniqueness; certainly it’s not a show that one will forget in a hurry. In purely musical terms, however, it’s not something that is likely to resonate or provide the best vehicle to highlight France and Rado’s occasionally gifted songwriting.

See our full gallery of this gig.