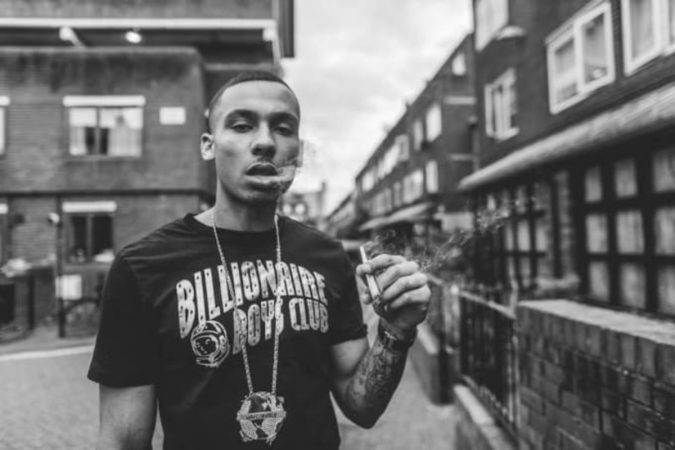 Hailing from the notoriously rough and tough Mozart Estate in North West London, profligate drug peddler come successful grime artist Fredo – after a forced cancellation in Birmingham an evening earlier – braved the snowpocalypse and arrived in Bristol to resume his UK tour. It’s a rather radical musical departure for The Fix born out of sibling beneficence: My 15 year old brother is reaping the benefits of my reviewing racket, bypassing the sold out status of tonight’s show and attending his first ever gig.

In addition there’s the secondary motive, as the much older observer, of scratching the itch of curiosity; what the hell is it that these spoon-fed, smartphone obsessed fledglings are listen to? Is there anything to be learned about today’s yoot? Is Fredo the source of my little bro’s worrying credo that a pair of underpants costing under £100 are barely worthy of covering his genitals?

After stringent security checks upon arrival suggest that, whether accurately or not, the audience for Fredo’s music and the genre in general is more conducive to attempts at contraband, one cannot help but notice the brand-emphasising materialism – as regularly boasted in Fredo’s lyrics – reflected in the crowd. I’m informed that a gentleman nearby is wearing a pair of Luis Vuitton shoes worth around £700. It’s hard not to think of how many pairs of Golas could be bestowed upon poor, barefooted Africans with that sort of wad. His jacket is apparently worth £500. These two items alone surpass the GDP per capita of 15 of the world’s poorest countries. Peter Singer absolutely needs to have a word.

With tonight’s support act absent without leave, it’s a long wait before Fredo appears on stage. However, the atmosphere in the room is kept lively by the hitherto unfamiliar – to me at least – phenomenon of the grime mosh pit. Amidst a crisscrossing sea of phone camera lights, a large group near the front forge a boisterous mass of chanting and jostling as Drake’s ‘God’s Plan’ and, later, Fredo’s own ‘Change’ emerge from the venue’s sound system.

Finally, the sighting of a DJ taking to her decks and Fredo’s best MCing pal Savo, who sports a somewhat smaller scale tribute to former Nottingham Forest striker Jason Lee’s much derided “pineapple head,” means that the wait is nearly over. “Where you at boy?” Savo utters in introduction as Fredo strides on to the stage and fires off into ‘Trapspot.’ It’s an opener that contains the familiar rap staples of smoking and pushing drugs, evading the law, referring to women as “bitches” and the pursuit of material wealth.

And, for Fredo, it’s a pursuit that has clearly been a successful one. He’s blinged up to the nines with a medallion, ring and a diamond encrusted watch that is purported to cost £50,000. Stories suggest that, such was his ingenuity and entrepreneurship in the narcotics biz, Fredo was “balling” even before his music career took off. Looking at the twinkle of “ice” (I’m told that diamond encrusted bling equals “ice”) emanating from his wrist, he’s obviously banged out many a ten bag in his time.

Though the theme of tedious material braggadocio has been a mainstay in rap/hip-hop circles since not too long after Kool Herc first experimented with two turntables in the 1970s, Fredo’s obsession with designer brands is particularly uninteresting. ‘Pattern Gang’ mentions “Balmain jeans” (they’re a tad expensive) while ‘Like That’ features a nod to “Dolce jeans” (a tad expensive). Elsewhere there’s the more generic celebration of opulence: “20 grand and that’s just for my for bling and I ain’t include my watch or my ring.” Sadly lacking is a shout out to the perfectly functional Red Herring jeans I bought in Debenhams just after Christmas.

Fredo, a smile from whom it seems would tear a hole in the fabric of space time, struts confidently around the stage and intermittently praises the audience for his enthusiastic reception. As has become apparent gig ritual, he is handed a joint about the size of a Pringles tube before declaring that the venue has threatened to fine him £200 should he spark up a forbidden jay. Though he has provided us with one or two lyrical hints that he is fiscally rather stacked, Fredo decides to forgo breaking venue protocol.

Proving that it’s not all bling, bitches, booty and partaking in druggy misadventure, there’s the occasional lyrical curveball; ‘Tables Turn’ talks of “stretching the midget”, apparently the grime star’s chosen euphemism for a night of onanism while “I give bro couple bags coz he lives in the bin” makes charming reference to Oscar The Grouch. Normal service is later resumed during ‘Again’ (“Tryna get on the Forbes list/My chains cost a mortgage”).

Though not close to being taken by the music, an interesting and enjoyable aspect to the evening’s performance is the reaction of the crowd. There’s the ever present mosh pit, people rapping along to the words, friends fronting each other out in mock aggression and rap battling the lyrics at each other. One of music’s prime qualities is that it can deliver the sense of communal belonging and a shared moment of enjoyment for hundreds or thousands of people at any given show. The atmosphere in the room tonight has ostensibly captured this affecting aspect of live music. However, given the braggart message of the music and the ubiquitous smartphone recordings (most likely used to garner attention on social media at a later date), it’s tainted by a sense of individual showiness or self-serving swagger. I’m not sure if this is community or whether other people are merely conduits for one’s self-projection of ‘cool.’

The performance ends with Fredo being joined on stage by around 15 other of his crew for “They Ain’t a 100.” One of them looks a bit like the dreadlocked bloke with the lucky egg from Cool Runnings. Suddenly, after 45 minutes the music is over. It feels a little brief but, as someone adorned in coruscating jewels costing more than I could earn for about a decade’s work, one can forgive a slightly skewed perspective on value for money.