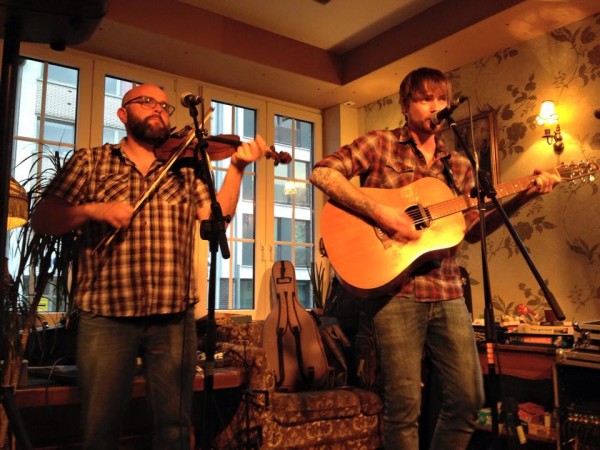 “I’m sorry if we’re having more fun than you are”, says Nick Parker as he addresses the crowded Zuhause in Aachen as he, Gaz Brookfield and Ben Wain throw out some impromptu collaborations to a delighted audience in the first venue on their German tour. Speaking as a punter, I can honestly say the feeling was mutual and with an appreciative crowd chanting “Zugabe”, translated as “more”, at the end I’d guess they would have happily watched all night.

The collaboration felt like a natural fit, but this is a duel solo tour for fine musicians both held in high regard in the South West. The Zuhause is my kind of venue for acoustic performances; cosy and intimate, it has the feel of a lecturer’s living room with an eclectic array of books complementing the odd antique, comfortable arm chairs and sofas and a selection of board games, the latter out of respect for good old fashioned fun. On the night it feels like an event, Nick Parker is back in town and this time the seasoned Deutschland performer has brought a much-hyped guest that the Anglophiles in the room would instantly love.

While the affable Nick Parker continued to greet those faces familiar to him as they walked through the door, Gaz Brookfield took to the stage and along with his violin armed sidekick, the sensational Ben Wain, they turned in the kind of performance that will now see them welcomed back to Aachen whenever they want. Simply – Gaz was brilliant.

When speaking with Mr Brookfield after the gig he told me he was nervous, but you wouldn’t have guessed it. He worked the crowd brilliantly and built an instant rapport with his light and at times self deprecating humour drawing laughter along with several footnotes along the way. In early songs he interjected with concise briefings for an audience who you wouldn’t expect to understand various references, again showing good humour, ensuring that his witty, personable and relatable songs were just that bit more relatable.

Having seen Gaz on a couple of occasions before I knew what to expect from him as a musician and on this evidence the level of adoration he receives in Bristol is fully justified. This set was upbeat, his performance was brought to new heights with Wain at his side, and vocally I felt he was bang on point. ‘Be The Bigger Man,’ a song he said may be “part autobiographical”, was the highlight for me and I sense he particularly revels in performing this tale of being bullied as a child and then getting one over on his nemesis years later.

I’m throwing in a cliche here but his passion shines through when performing and thus one could imagine that this was a humbling experience as a lively crowd joined in with foot stomping and clap and singalongs. Crowd participation and appreciation can be hard to muster up in some UK gigs these days and if you were to use this as a case study, more acts would be following the likes of the next man on stage in arranging tours like this. 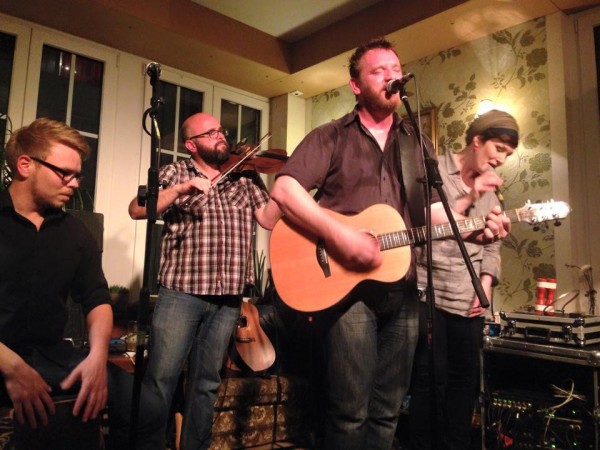 Nick Parker gave Aachen a delightful set and although his False Alarms weren’t present, Ben Wain played the second part of a double header as an honourary member. ‘Jerusalem’ kicked off the set and gave an inclination we were in for something special. I was surprised to hear that Wain had only started practicing the songs that day but you wouldn’t have known. Between songs he would receive quick notes about the next in line from Parker, who would often seem overwhelmed and taken aback by Wain’s ability to take on board and complement perfectly.

Tracks like ‘Could We At Least Try’ and ‘Never Been To Dublin’ from his latest album Angry Pork and the Occasional Bird have become permanent fixtures in recent Nick Parker gigs and rightly so because they’re lovely and brilliant, but I was particularly happy to hear earlier material including the beautiful ‘Things That I Miss’, which showcases the sweet and thoughtful personality behind the music. The origins of the song are sad, it’s dedicated to a friend who died young as a result of a brain tumour and left his partner and children behind. A proud father himself, Nick puts himself in the position and beautifully describes the little moments he loves with his family and would ultimately miss.

‘Comfort Or Convenience’ was my highlight as he was joined by Julia and Mario, members of a local band, The Tidelines, for a gorgeous performance enhanced by the former’s supporting vocal and the presence of the Cajon brought by the latter. “It’s lucky I didn’t play my song about open mic nights”, joked Parker – in ‘Tom, Dick and Harry (Ode To Open Mic)’ he notes how more acts are incorporating a Cajon and I sense he is of the opinion they are often not justified or played correctly.

Ending the set with Gaz Brookfield on stage with he and Wain, the trio performed each other’s songs, including Parker’s well known song about day to day life with young children, ‘Metaphor,’ and a few covers. These three chaps were in carefree bliss and in this state they brought Aachen an evening of loveable folk crafted in England’s south west. If The Zuhause gig is anything to go by then those lucky enough to host them will have a great night in store.