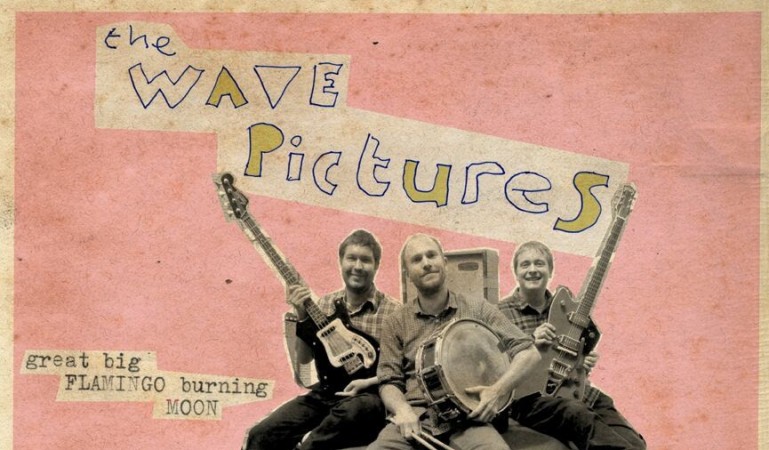 Plugging away within the shadows of cult indie rock obscurity for over sixteen years now, Leicestershire trio The Wave Pictures’ marriage of tuneful tweeness and quirky lyrical minutiae has seen them gradually emerge as something resembling underground royalty. While their aplomb for charming live performance has secured their enduring existence on the gig circuit, the Loughborough three piece appear still in a process of evolution. Previous album City Forgiveness, a nineteeen track sprawl released in 2013, was peppered with blues-rock jams that belied their indie roots while the fizzing garage rock blues of Great Big Flamingo Burning Moon is a further departure still.

However, with the titular lyrics being the first we hear as the album begins, fans can rest assured that frontman David Tattersall’s absurdist verbosity remains. The nonsense lyrics and the call-and-response chorus of the title track provide an enjoyable opener seen out by Tattersall’s frenzied axe assault. ‘I Can Hear the Telephone (3 Floors Above Me)’ calls to mind the frivolous punk-lite of Jonathan Richman (in similarly playful vein to ‘Abominable Snowman in the Market’), if only The Modern Lovers had Tattersall’s sharp riffing and breakneck solo skills.

In collaboration with artistic polymath Billy Childish, who co-writes and produces here, the new album features bluesy punk assaults very much in the mould of some of Childish’s own work (his ‘Evil Thing’ an apposite reference point). While the album is of a generally rapid pace best to further expand Tattersall’s reputation as the greatest noodler this side of the commercial radar, the subdued ‘At Dusk’ offers little save a 3 minute breathing space before the pleasingly repetitive riff of ‘All the Birds Lined Up Dot Dot Dot’ provides the bridge back to the high-octane nonsense of ‘Frogs Sing Loudly’; with drummer Johnny Helm on particularly thunderous form, it is a track that captures the band sounding like what Childish has dubbed a “weird Cream”.

After touring Daniel Johnston’s Artistic Vice last year, The Wave Pictures proved they had a flair for reinterpretation and this is further evidenced with the back to back Creedence Clearwater Revival covers of ‘Sinister Purpose’ and ‘Green River’; the former skipping along joyously and featuring Tattersall’s most frenzied guitar work; the harmonica drenched blues of the latter completing arguably the album’s two most salient moments thus far.

Great Big Flamingo Burning Moon is a fairly rare beast in that it ends with three tracks that, rather than existing to wind the album down to its conclusion, leaves the listener wishing for more. The playful basslines and harmony enhanced chorus of ‘The Goldfish’ provide, with the welcome appearance of glockenspiel, the albums hitherto best blend of pop melody and blues rock. That is at least until ‘We Fell Asleep in the Blue Tent’; propelled forward by a ‘Since You’ve Been Gone’ style guitar thrash, it contains another harmony laden chorus nicely embellished by the female vocals of Jujo Claudius. Finally, ‘Pea Green Coat’ is a delightfully mindless barrage of wild abandon; featuring driving chords, a chorus of sing-along simplicity and a bass solo from Franic Rozycki, the album is brought to a searing finish.

While no means perfect, Great Big Flamingo Burning Moon is an enjoyable album full of upbeat rockers that both marks the band’s arrival as versatile musicians and encapsulates their charmingly idiosyncratic and unselfconscious approach to making music. While some fans may feel that the album is bereft for lack of any of the twee indie anthems that have become The Wave Pictures’ signature, there is no doubting that fun is to be found therein and that its best moments will sparkle in the live forum.