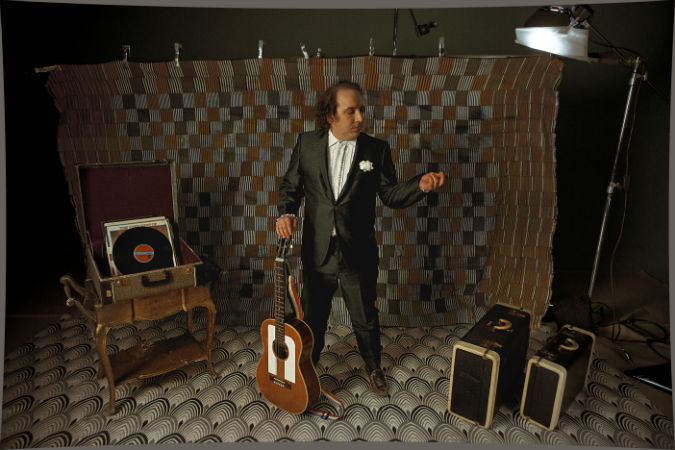 Review by Melony Mitchell – “When you are disrespected on stage, it is hard to put on a show” and with that Har Mar Superstar left, taking his band with him. Let us rewind to happier, more harmonious times. It was a wild and windy night in Bristol. An enthusiastic crowd, keen to leave their rain-soaked lives behind, prepared to land on Planet Har Mar. The unlikely sex symbol took to the stage resplendent in tasselled jacket, red trousers and a brown loafer /white sock combo; a drink in each hand. Backed by his proficient band including singer Lisso, (who also played a storming support slot), Har Mar promised to have our “Har Mar babies” then launched into “Ez Pass”, an infectious dirty pop song that saw the performer bump and grind his bountiful booty in front of an appreciative audience. For those unacquainted with the portly performer, Har Mar is actually Sean Tillman from Minnesota, USA. After working his way through a number of garage bands and performing as Sean Na Na, his desire to explore the RnB genre led to the development of his Har Mar alter ego. Naked, high energy performances in the first few years of the Millennium would create a buzz around the entertainer and a number of albums followed. Add in kissing Kate Moss, winning NME’s Man of the Year in 2004 and a role in Todd Phillip’s Starsky and Hutch movie, Har Mar’s star was truly in the ascendant. Back in Bristol, Har Mar began his infamous on- stage striptease. He removed his jacket to reveal a dazzling, 80s disco, black and gold sweater then energetically launched into songs from his infectious new album ‘Bye Bye 17’. The new material is a change of direction for the ironic RnB star. “Lady You Shot Me” has the feel of an authentic, old soul classic. Behind the Har Mar persona is a talented vocalist with a rich tone and powerful delivery that, at times, is lost in all the stage craziness. The pace is stepped up with an energetic performance of his single ‘Prisoner’, which included formation dancing with Lisso and flowers thrown onstage by an admirer. This was Har Mar in his element. As the love in the room increased so Har Mar found time to make out with willing young ladies in the front row. A few more numbers, including a cover of Gilbert O’Sullivan’s “Alone Again (Naturally)”, and our Superstar, like a sweaty onion, shed a few more layers, bringing tears to the eyes of some and delight to others. A member of the audience, so overcome with emotion, hurled a pair of knickers towards the star… then things went badly wrong. The singer took exception to the aforementioned undergarments and demanded the owner reveal themselves. When the guilty party failed to come forward, Har Mar, well known for his unpredictability, stopped the show and stormed off stage in a Diva-esque moment of rage. The band and audience were united in their confusion but eventually the band followed their leader and retired back stage, leaving an excitable audience member free to invade the stage and play on the abandoned drum kit. Whether the ‘Tom Jones style’ knickers throwing incident was lost in translation or represented a culturally offensive act in Minnesota remains unknown, but it would take ten minutes before Har Mar was persuaded to return. The performer apologised to the audience and was “sorry that shit went down” but his bitterness towards the anonymous pant flinger remained and he accused a number of front row punters of the heinous crime. The high drama made the angry rendition of his finale “Don’t Make Me Hate You’” all the more prescient. The crowd had been up for a sleazy one night stand with Har Mar Superstar but he came, saw and departed prematurely, leaving many dissatisfied and unfulfilled. Find out more about Har Mar Superstar at harmarsuperstar.com
Follow @Thefixmag
Recent Posts
We Like You…