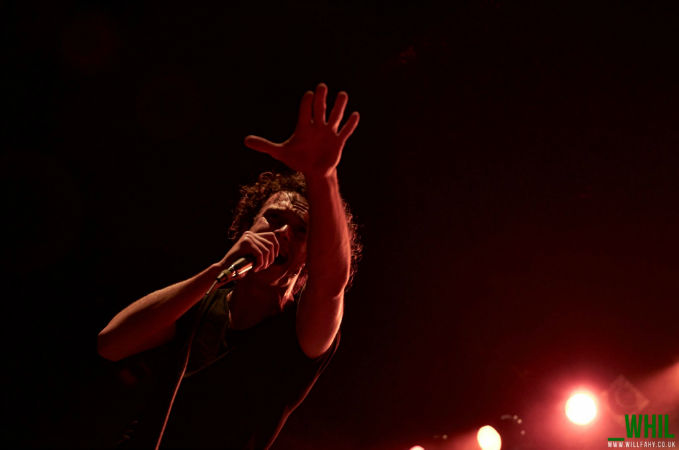 Tis the season to ROCK!!

While many are wrapping presents, eating their own body weight in turkey/mince pies and embracing under mistletoe, a mixed crowd of old rockers (some sporting Black Sabbath 1979 tour t-shirts) and younger emo disciples packed themselves into the O2 for this feast of rock – with Heaven’s Basement supporting Black Veil Brides on just the 2nd night of their UK tour. So eager are the crowd that even the sound check by the stage hands gets loud whoops and cheers that would normally be reserved for the headline act. The warmth of the reception that greets the band when they do finally enter this cauldron is a reflection of the fact this is almost a dual headline tour.

“My good friends it’s great to see you again, we are Heaven’s Basement!” states frontman Aaron Buchanan before falling back on a bed of feedback on opener “Welcome Home“. It’s a song built on strong vocals, well-written melodies, clever lyrics, big choruses and some kicking guitars that epitomises them at their best.

Comparisons to Guns and Roses are accurate (see “Fire Fire“) but AC/DC, Queens of the Stone Age and hints of Nirvana are clearly also credible influences – especially on songs like “Reign On My Parade” and standout of the night “Heartbreaking Son of a Bitch” – as they display all the key attributes of a modern rock behemoth.

It’s almost a year now since their debut – ‘Filthy Empire’ – came out to resounding critical acclaim and the songs sound as taut as Sharon Osborne’s face, with the rhythm section of Rob Ellershaw (bass) and Chris Rivers (drums) never missing a beat all night. Indeed the band’s toned physiques are testament to their energetic live style.

Singer Buchanan is certainly here to have a good time as he asks: “How the fuck are we feeling tonight? Ready to party??” The crowd, clearly not yet jaded by festive season excesses, is more than willing to comply and mosh through most of “Can’t Let Go“. Buchanan also appears to be walking on hot coals throughout as he perpetually dances and gesticulates his way across the stage with the inexhaustible enthusiasm and excitement of a small child on Christmas day.

He channels this boundless energy into conducting the crowd like a musical drill sergeant with a bout of left side versus right side scream off on “Reign On My Parade“. During which he even manages to walk on the crowd. Standing aloft in the centre of the audience from whence he carries on directing screams for a minute before finally returning to the stage to finish the song.

Finale “Executioner’s Day” sees lead guitarist Sid Glover steal the show as he plays part of his note perfect solo with his teeth. Having whipped the crowd into a frenzy the band retreat into the shadows happy in the knowledge that at the very least they have helped shed some of those extra Yuletide pounds.

Heaven’s Basement debut album ‘Filthy Empire’ is available from all the usual sources. After travelling to the US they return to the UK for a headline tour and play the Fleece on 25th March 2014. Find out more about the band at www.heavensbasement.com